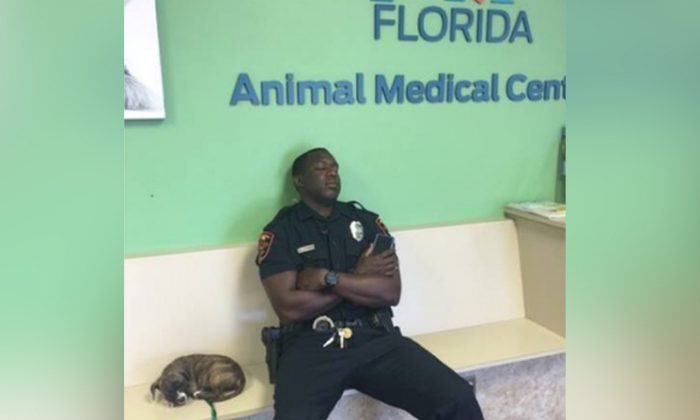 A police officer rescued a stray puppy in Florida, and the moment was captured.

Officer Kareem Garibaldi of the Lakeland Police Department in Lakeland, Florida, spotted a small boxer-pit bull mix wandering in a neighborhood while on patrol in the early morning hours on May 21.

Garibaldi said he couldn’t find the pup’s owner so he took her to the station when his 12-hour shift ended.

After three days of work, he still couldn’t find the dog’s owner. As a result, Garibaldi took her to the SPCA Florida animal shelter to get a check up.

“I walked in, and that’s when I saw him and the puppy,” shelter manager Connie Johnson told The Dodo. “He was exhausted, the puppy was exhausted, and they were sleeping. It was one of those moments that just grab your heart. He was so determined to get her help.”

“It clearly was a selfless thing to do,” Johnson was quoted by The Dodo as saying. “He wasn’t thinking about getting home to sleep. He was thinking about what he could do to help this puppy survive. He actually woke up at one point just to see if she was OK, then he went back to sleep.”

A dispatcher reportedly became enamored with the pooch and adopted her the same day.

The dog was named Hope.

Garibaldi’s coworkers at the Lakeland Police Department posted the image earlier this week.

“It’s the kind-hearted officers like this that makes the Lakeland Police Department truly unique,” the post said. “Having worked a long weekend, Officer Garibaldi still found the energy at the end of his shift to help man’s best friend.”

Here is the the Lakeland Police Department’s full statement:

On Saturday in the early morning hours, Ofc. Kareem Garibaldi almost hit this small pit bull/boxer mix puppy. The puppy was running around loose in the neighborhood. The 8 to 10 week old puppy had no collar or dog tag so Officer Garibaldi was unable to locate the owner after searching around the neighborhood.

Ofc. Garibaldi took the puppy to LPD to feed it and shelter it for the night prior to taking it home at the end of his shift. On Sunday, Officer Garibaldi brought the puppy back to LPD and posted pictures on social media sites and returned to the neighborhood looking for the owner.

At the end of his third day, 12 hour shift, Officer Garibaldi, on his own time, transported the dog to the SPCA to be checked out. He sat there from 8:45am to 12:00 p.m. as the vet checked the puppy out when this picture was taken and posted to Twitter. Later that day, the puppy found a new home.

It’s the kind-hearted officers like this that makes the Lakeland Police Department truly unique. Having worked a long weekend, Officer Garibaldi still found the energy at the end of his shift to help man’s best friend.