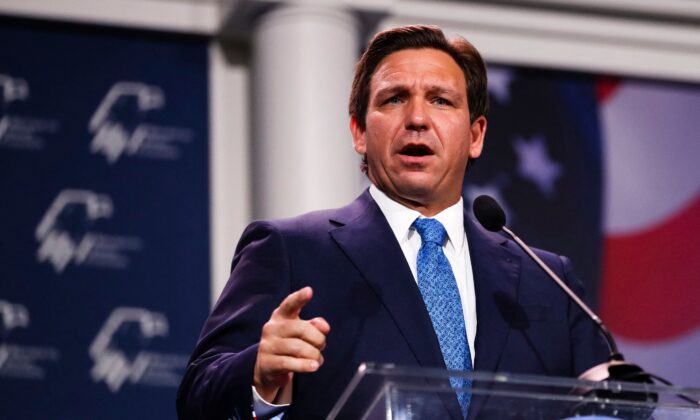 Florida Gov. Ron DeSantis, a potential presidential hopeful in 2024, said during the weekend that the midterm results show that the Sunshine State presents a “blueprint for success” for the Republican Party looking forward.

“What the election results in Florida show is that Florida really has a blueprint for success,” DeSantis told the influential crowd of Republican leaders, donors, and activists at the annual leadership meeting of the Republican Jewish Coalition on Nov. 19.

“What we’ve shown in Florida is you can stand up for truth, you can stand on principle, you can fight the woke elite, and you can win,” DeSantis said during his 25-minute speech, which generates the most applause including multiple standing ovations.

Despite securing one of the biggest wins in the midterm elections, rising GOP star DeSantis declined to address a 2024 speculation. Trump has recently taken to calling the governor “Ron DeSanctimonious,” and warned that DeSantis running in 2024 would be “a mistake.”

The Florida governor, who won the reelection with a double-digit lead over his Democrat rival, began his Saturday night speech by underscoring the fresh landslide victory and the Republican leadership across his state.

“We added four new Republican congressmen to the U.S. House of Representatives from the state of Florida,” DeSantis said after taking the stage. “We secured supermajorities in the Florida legislature, the most Republicans we’ve ever had in Florida history.”

“We dominated with independent voters, we secured record margins with Hispanic voters, we swept the suburbs all across the state of Florida. Our margins with rural voters were gravity-defying, we won by double digits, Miami Dade County. We won for the first time in almost 40 years, Palm Beach County.”

After taking office in 2018, DeSantis rolled out policy initiatives during his first term as a governor, such as fighting against woke indoctrination and the Disney corporation’s political activism.

DeSantis said a leader should never “stick your finger in the wind and try to contort yourself to wherever public opinion may be trending on one given moment,” but set out a vision, execute it, and deliver concrete results.

“And when you do that, the people respond,” the governor continued. “When you show people you’re willing to fight for them, they will walk over broken glass barefoot to come vote for you and that’s exactly what they did to me.”

“What we’ve shown is people respond to strong leadership,” he spotlighted.

After riding the endorsement of then-President Trump in the contested 2018 gubernatorial race, DeSantis barely won what was known as a swing state for many years.

More conservatives rallied behind DeSantis in the wake of the November midterms, as Republicans underperform expectations across the country outside of several states like Florida and New York. Some Republicans blame Trump, though a number of others noted he was not on the ballot. Some said DeSantis’s big win portended a strong result if he runs in 2024.