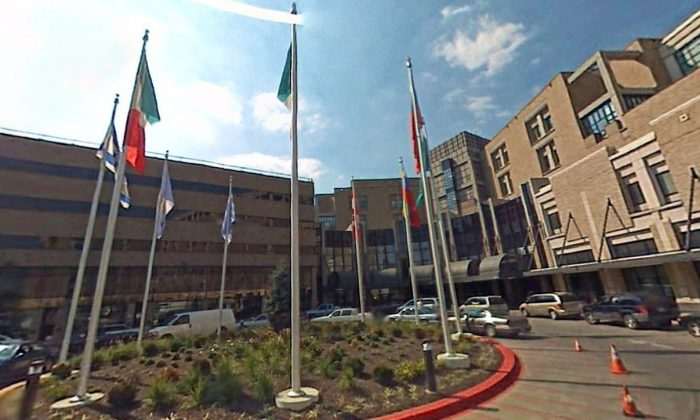 A Florida mom was arrested last week after a grainy video appeared to show her daughter licking a tongue depressor at a clinic before putting it back.

“PLEASE DO NOT TOUCH MEDICAL SUPPLIES! THANK YOU,” a notice warned above the container. Then, a girl, whose face is blurred, is seen touching and licking the medical equipment in a Jacksonville medical facility.

Days later, Cori E. Ward was arrested and was told by a judge to stay away from social media after the video of the girl’s antics went viral, First Coast News reported. Ward is accused of posting the clip to Snapchat.

She was charged with tampering with a consumer product without regard for possible death or bodily injury, which is a felony, according to the report. Her bond was set at $2,500 during a court appearance on July 12.

According to a local reporter with Action News Jax, the mother was also ordered by the judge to not have any contact with the doctor’s office.

BREAKING: Cori Ward, the mother who was arrested after taping her daughter licking tongue depressors at a doctors office had her bond set to $2,500. She’s been told she cannot have contact with the doctor’s office or any social media @ActionNewsJax @WOKVNews pic.twitter.com/RolOSAyOZ7

Ward responded to criticism of the video, claiming that she wasn’t aware of at least two other “licking” videos where people lick ice cream on store shelves before putting them back. A Louisiana man was arrested after one such video went viral.

“What I didn’t know was that there was a ‘licking challenge’ as I don’t scroll social media like that,” the woman wrote on Facebook, according to First Coast News. The materials that her children handled were cleaned or discarded, she added.

“The video doesn’t show that the items were thrown away or anything else that happened,” she continued. “I posted this on my personal Snapchat with my 20-something friends, where someone allowed another person to video it. I didn’t post it on Facebook or YouTube as a challenge or whatever.”

Meanwhile, she has expressed regret.

“I mean honestly I wasn’t thinking,” she told Action News Jax, adding, “I know what it’s like to, you know, have to worry about your kids’ health and stuff. I would never put somebody else’s kid at risk.

“I’m sorry for anyone that is offended. It should have never been taken this far,” she added.

The Jacksonville-based medical office where the incident occurred has since issued a statement.

“This type of behavior is not tolerated at All About Kids and Families Medical Center. Each year, we serve thousands of patients, and providing quality care and ensuring their safety is our top priority,” the office told Fox News.

“We were notified yesterday that a patient violated our trust with behavior that is inconsistent with the practices and standards that we uphold and expect at our facility,” reads a statement, reported Fox.

“Upon notification of this isolated incident, we contacted law enforcement to request a full and thorough investigation. In addition, we immediately removed all materials and container from the specific exam room and re-sanitized our entire facility. Our internal investigation does not reveal any resulting risks or harm to patients from this action.”