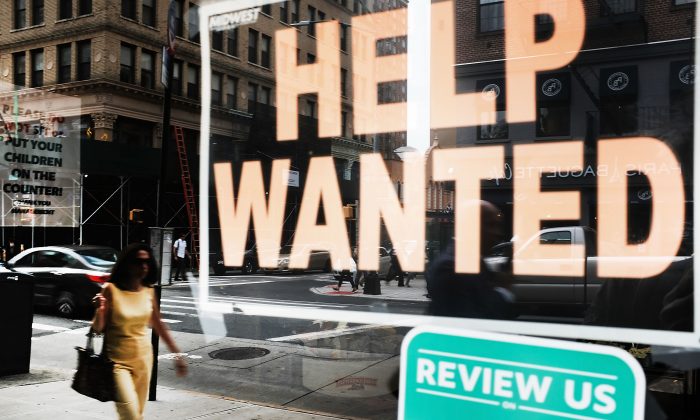 A help wanted sign is displayed in the window of a Brooklyn business in New York on Oct. 5, 2018. (Spencer Platt/Getty Images)
US News

Jobs in Florida are growing much faster than the national rate, according to a September employment report.

The office of  Gov. Ron DeSantis (R) estimated the job growth at three times that of the nation. Florida has recorded 17 months of continued private-sector job growth.

The Sunshine State gained 84,500 jobs in September, with 73,000 of those in the private sector, according to the governor’s office.

The figures showed an increase of 5.6 percent compared to the same time last year.

In a press release, the governor’s office said: “Florida’s labor force increased by 540,000 over the year, with 423,000 of that increase occurring in the last six months.”

Most jobs were created in the leisure and hospitality industry, adding 26,600 positions.  Trade, transportation, and utilities gained 19,200 jobs; professional and business services added 10,400; construction went up 6,900, and education and health services increased by 6,300 jobs.

Figures from the Florida Department of Economic Opportunity (FDEO) show there are more than 520,000 jobs listed online, giving Floridians a wide choice of work opportunities.

The FDEO secretary Dane Eagle said these figures demonstrate the success of the state’s “Return to Work” initiative, as Florida’s unemployment rate has “lowered over the year, decreasing by 2.3 percentage points.”

“Florida continues to provide meaningful job opportunities for individuals moving to our state and entering our labor force,” Eagle said in a written statement.

“With our unemployment rate decreasing and labor force increasing, we will work to further this great success by making investments that continue to strengthen our economy and increase our state’s resiliency.”

Gov. Ron DeSantis said he is pleased with what he is seeing with growth and added it was not an easy task to achieve considering the national economic climate and inflation.

“Despite tremendous national headwinds and economic uncertainty, Florida has reached a level of job growth only seen on four other occasions in the past 30 years,” DeSantis said in a press release.

“We will continue to work hard to keep Florida open, free, and built for opportunity.”

The department reports that “Florida’s unemployment rate of 4.9 percent for September 2021, dropped 0.1 percentage point from August 2021.”

While Florida has seen consistent gains in the labor force, the nation saw a drop in job-growth rates.