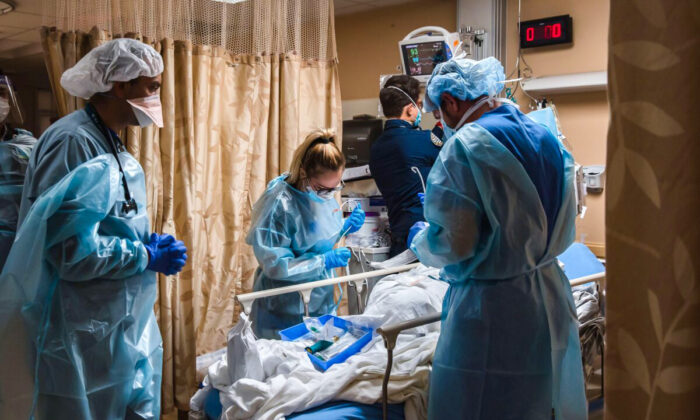 The Florida Department of Health (DOH) alleged Friday that the Centers for Disease Control (CDC) erroneously changed the state’s COVID-19 data without contacting the agency and didn’t respond to calls to correct the problem.

Jeremy Redfern, press secretary for the state health agency, said that the DOH transmits COVID-19 data, including deaths, to the CDC several times per week.

Last week, the CDC removed 72,277 COVID-19 deaths from its nationwide tracker after discovering a so-called “coding logic error” that counted deaths from 26 states that weren’t linked to COVID-19, the illness caused by the CCP (Chinese Communist Party) virus. As a result, the CDC tracker’s all-time tally reported childhood deaths from COVID-19 dropped 24 percent after the switch.

However, Redfern told the National Review that the CDC made a mistake when it removed those death figures. Of the 72,277 COVID-19 deaths that were removed by the agency, about 20,000 were Florida deaths that the state previously had told the CDC were actually COVID-19-related.

The CDC, he said, will ultimately have to restore the 20,000 or so Florida deaths that were allegedly erroneously deleted from the tracker.

“All those cases they deleted, they’re going to have to put back on there. And my guess is they’re not going to tell anybody that they’re putting it back on there. They’re just going to do it and hope that nobody notices,” Redfern told the outlet.

The CDC took “about a week” to try to fix the issue, he said, adding that the federal agency on Thursday sent Florida’s data back to the health agency for a correction.

“Instead of calling us and verifying these data, they decided to switch to a different field in the data set and just delete a bunch of our deaths,” Redfern told the publication.

The Epoch Times has contacted the CDC and DOH for comment.

Last week, when making the change on its website, the CDC explained that “data on deaths were adjusted after resolving a coding logic error” that “resulted in decreased death counts across all demographic categories.” Previously, the CDC adjusted its death count in August 2021 after a “data discrepancy” was identified.

Those figures—including cases, deaths, and hospitalizations—are often cited by doctors, federal policymakers, and public health experts when pushing for COVID-19 vaccinations, including for children, and other virus-related rules.

Some GOP lawmakers have repeatedly assailed the CDC for what they have described as a lack of transparency around reporting COVID-19 data.

“Throughout the pandemic, CDC and other health agencies have promoted inconsistent policies and recommendations regarding COVID-19,” Sen. Ron Johnson (R-Wis.) said in a letter to the CDC dated March 1. “Many Americans who voiced concerns about these policies have been subjected to ridicule, vilification, and censorship from the press.”

A county in Northern California in July 2021, meanwhile, opted to revise its COVID-19 death totals after refining its data-reporting systems. Upon using a new approach, officials in Santa Clara County said deaths dropped 22 percent after using the updated method.