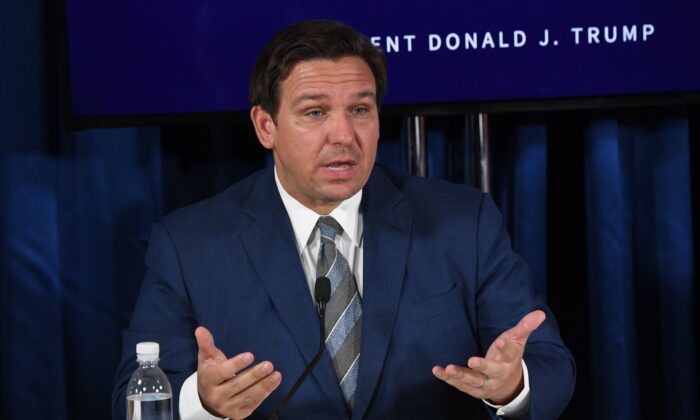 “Over the last decade, the Communist Party of China has been meticulous and deliberate in their economic infiltration across the globe,” DeSantis said in a press conference on March 1.

He added: “The Chinese Communist Party has made it a mission of their global expansion of power to steal intellectual property from our businesses, our government, and our academic institutions, all to further fuel their global objectives.”

“We need to take action, stand firm against the Chinese Communist Party and foreign influence and interference in American research, education, and public affairs,” the governor said.

On Monday, Rep. Matt Gaetz (R-Fla.) took to Twitter to thank the governor for his effort.

“Florida will take a leading role by proposing important steps to address past, current, and future concerns of the Chinese Communist Party and other foreign influence in the governmental, economic, and academic affairs of our state.”

According to DeSantis, state agencies, state universities, public schools, and local governments must “never use tax dollars to establish language and culture programs with foreign governments that place the interest of those governments ahead of our own interest.”

He named Beijing-funded Confucius Institutes (CIs) as an example, and applauded the Trump administration for having taken critical steps to limit the spread of the schools in the United States.

Under the Trump administration, CI language and culture programs came under scrutiny from U.S. officials over concerns that they spread Chinese communist propaganda, restrict academic freedom, and facilitate espionage in U.S. classrooms. In August last year, the State Department designated a Washington-based center that promotes CIs in the United States as a foreign mission.

“With our proposal today, we will ensure that no such organization is able to regain a foothold in any Florida institution of higher education,” DeSantis said.

As of Feb. 17, no CI was found on any of Florida’s campuses, according to the education advocacy group National Association of Scholars (NAS). However, the group stated that 55 CIs remain open in the United States, including three that are scheduled to close later this year.

Universities would be required to establish “a strict vetting and review process” for foreign applicants seeking to take up research positions, according to DeSantis. Meanwhile, universities also need to have programs to monitor their employees’ international travel.

“We must ensure that our research innovation and talent benefit Florida and benefit our country, not foreign interests like the Chinese Communist Party,” DeSantis said.

Under the proposed legislation, state agencies and political subdivisions, as well as public institutions of higher education, would be required to report any gift of $50,000 or more from a foreign government, a foreign person, or any individual who works as a proxy of seven foreign countries of concern. These countries are China, Cuba, Iran, North Korea, Russia, Syria, and Venezuela.

Violators need to pay 105 percent of the amount of undisclosed gifts back to the state of Florida, according to DeSantis.

“The private entities seeking public grants or contracts in excess of $100,000 will also be required to report any contract with, donations from, or grants received from persons or entities substantially influenced by such governments, having a value in excess of $50,000 from the previous five years,” DeSantis said.

Anybody who commits trade secrets theft on behalf of a foreign government or entity would face “longer prison sentences” because their offense would be “reclassified one degree higher” under the proposed legislation.

Great day to announce our agenda to push back against China and other foreign adversaries who wish to steal our IP and engage in espionage and deception. Not in Florida and not on our watch. @GovRonDeSantis @ErinGrall @MBeltranFL @SenMannyDiazJr @jenn_bradley @FLGOPMajority pic.twitter.com/IMPHcFaSdU

In February, Lin Yang, a former University of Florida professor, was indicted on charges including wire fraud and making false statements, after he concealed both his work in China and financial support from the Chinese regime.

“We have only just begun to scratch the surface of the depth of China’s influence and gathering operations [in Florida],” Sprowls added.

Sprowls concluded that the new legislation will make Florida “the first in the nation” to roll out its own oversight to protect institutions funded by U.S. taxpayers from foreign interference.