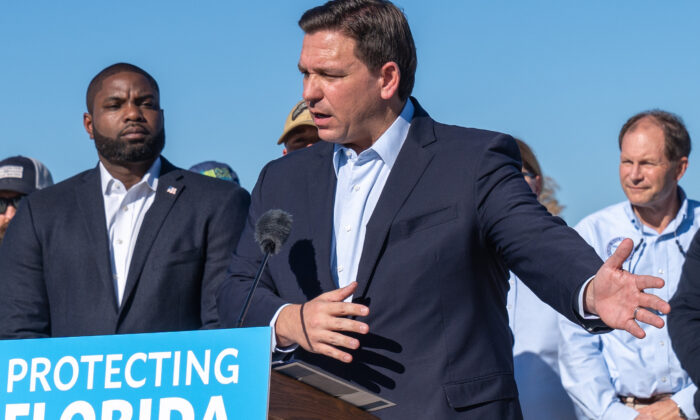 Florida Gov. Ron DeSantis at a press conference in the Everglades on Feb. 1, 2022. (Courtesy of South Florida Water Management District)
US

Florida Gov. Ron DeSantis announced on March 1 he is making $7.1 million available to assist the victims of the Southwest Florida tornadoes after the Federal Emergency Management Agency denied aid.

DeSantis’ government, together with the Florida Department of Economic Opportunity and local community action agencies in Lee and Charlotte counties, is allocating “funding and resources to assist income-qualified” people and families affected by the tornadoes that hit on Jan. 16.

A category 1 tornado touched down in Charlotte County and a category 2 tornado hit Lee County.

“Victims of these tornadoes in Southwest Florida deserve assistance to kickstart their recovery process,” the governor said in a March 1 statement.

“Despite the Biden administration’s failure to help Floridians in need, I will continue working with state agencies to find ways that we can assist our residents who have been devastated by these tornadoes.”

On Jan. 24, the state asked the federal government for aid in all programs under Individual Assistance. This includes funds for individuals and households, disaster case management, crisis counseling, legal services, and disaster unemployment assistance.

A month later, FEMA denied the state’s request for assistance after the governor signed an emergency declaration setting the wheels in motion to begin the process of assessing damage and rendering financial aid.

“Based on our review of all of the information available it has been determined that the damage from this event was not of such severity and magnitude as to be beyond the capabilities of the state, affected local governments, and voluntary agencies,” read a letter from FEMA administrator Deanne Criswell to DeSantis.

“Accordingly we have determined that supplemental federal assistance is not necessary. Therefore, I must inform you that your request for a major disaster declaration is denied.”

A visibly frustrated DeSantis held a press conference on Feb. 18 telling the victims he plans to appeal against FEMA’s decision.

“Unfortunately, the state of Florida received notification that the Biden administration denied Florida’s request for individual assistance to support Floridians who were displaced by the tornadoes,” DeSantis said. “Despite the federal government’s choice to decline assistance, it is our view in the state of Florida that we need to remain committed to the people of Lee and Charlotte counties.”

The tornado victims are reported to be mostly elderly with 84 percent of them on fixed incomes. An estimated 158 homes were destroyed or sustained major damage.

The governor stood with victims in Lee County amongst the unremoved debris and damaged homes, some of them unlivable, at the February press conference.

“Many people recognize here, and I don’t know if everyone realizes outside of here, that you had 158 homes that were either destroyed or sustained major damage and almost 300 residents were displaced as a result of these tornadoes,” DeSantis said.

“It’s not that easy to just pick up and move into a new home, particularly in Florida where there is a lot of demand.”

On Feb. 22 the governor launched a donation portal following news that FEMA had denied the recovery aid.

“We cannot continue waiting on the federal government to provide relief to these Floridians,” DeSantis said. “After meeting with survivors last week, it’s clear they still need our help.”

Florida Department of Emergency Management Director Kevin Guthrie said in a statement that the tornado victims have been “navigating a difficult recovery process.”

Guthrie added that the donations would go directly to the “survivors who need it most” in the hopes that it will help them begin to rebuild their lives.

The $7.1 million will be dispersed to the affected communities through the Community Services Block Grant and the Low-Income Home Energy Assistance Program.