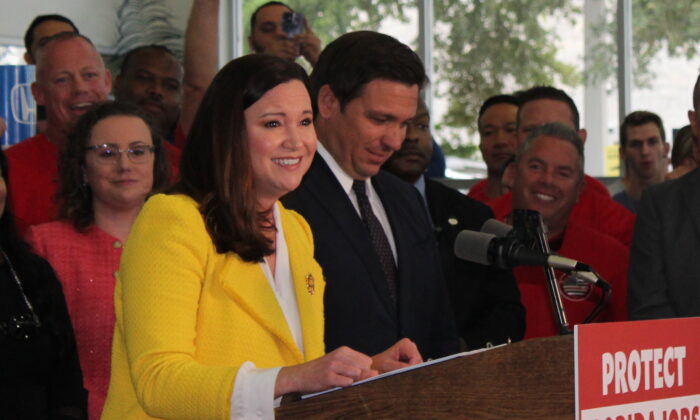 Florida Attorney General Ashley Moody has filed suit against the Biden administration for what she called the “unlawful Centers for Medicaid and Medicare Services (CMS) vaccine mandate that threatens to exacerbate the health care worker shortage.”

At a Nov. 18 press conference Moody announced her action and said she was concerned about health care worker shortages and that vaccine mandates could make them much worse.

The CMS rule, published on Nov. 5, gave a deadline of Dec. 6 for healthcare workers to receive at least one dose of the COVID-19 vaccine and a deadline of Jan. 4 to be “fully vaccinated,” in order to received Medicare or Medicaid funding.

Moody said she was “not afraid” to push back on what she described as “unlawful federal overreach.”

“Fortunately, the law is on our side,” Moody said.

“I filed a challenge to end the CMS vaccine rule—to protect doctors, nurses and other medical professionals, as well as the stability of the entire health care industry.”

Registered nurse Kate Johnson spoke at the press conference and said she faced losing her job at a veteran’s hospital for not wanting to “take the jab.”

Johnson said she was expecting her second child and did not want the vaccine.

“Nursing for me is more than just a job. It’s how I’ve provided for my family for the last 10 years,” she said.

“But more than that, it is a calling. And you have bureaucrats sitting in an office somewhere and decide that they can strip me of my calling in life because of an inability to comply with their whims and wishes.”

If the rule is enforced, Florida is set to lose millions of dollars in Medicaid and Medicare payments.

Many healthcare workers are quitting their jobs because they do not want the vaccine, Moody said.

She outlined in her complaint that CMS “lacks the authority to impose the mandate.”

Moody said CMS did not consult with any state before “implementing the vaccine requirement,” and fears staffing shortages in healthcare would endanger patients.

“Floridians stand to lose expedient, expert care as the mass resignation would come amid one of, if not the, worst health care staffing shortages in the nation’s history.”

The attorney general’s complaint for a temporary restraining order named the U.S. Department of Health and Human Services and other federal agencies.

It asked that the court immediately “enjoin and set aside the CMS vaccine rule.”

“Nobody should lose their job due to heavy-handed COVID mandates and we had a responsibility to protect the livelihoods of the people of Florida,” DeSantis said.

Moody’s first filed for relief of COVID-19 mandates in September 2021, after warning the administration to stop the enforcement of vaccines on Floridians.

But the administration went ahead ordering the Occupational Health and Safety Administration (OSHA) to develop rules so employers of 100 or more workers had to enforce COVID-19 shots for staff. Employees that refused the jabs faced termination.

In October 2021, Moody followed with a “Complaint for Declaratory and Preliminary and Permanent Injunctive Relief in the United States District Court for the Middle District of Florida,” to stop the measure in what she said was a “blatant disregard for the constitution.”