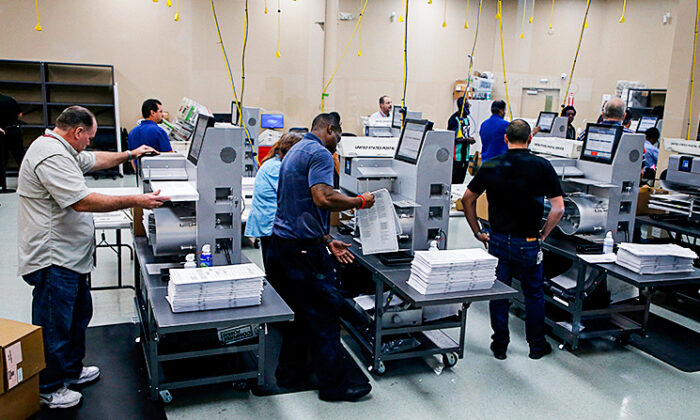 'We expect this law to stand up to any further legal scrutiny.'
By Patricia Tolson

On Friday, May 6, a federal appeals court granted Florida’s request to reinstate portions of the state’s election laws, struck down by a district court judge who ruled the measures unconstitutional and discriminatory.

On May 1, 2021, the Republican-controlled state Senate approved SB 90 (pdf), which overhauled Florida election law ahead of the 2022 midterm elections and 2024 presidential election. Gov. Ron DeSantis signed the bill into law May 6, 2021, with immediate effect, strengthening voting rules in the state and establishing the nation’s first Office of Election Crimes and Security at the Department of State.

The law was immediately challenged by multiple liberal advocacy groups.

The law requires vote-by-mail ballot signatures to match the most recent signature on file to be counted. The measure also dictates that political parties and candidates cannot be shut out from observing the signature matching process.

“A supervisor shall designate each drop box site at least 30 days before an election. After a drop box location has been designated, it may not be moved or changed. On each day of early voting, all drop boxes must be emptied at the end of early voting hours and all ballots retrieved from the drop boxes must be returned to the supervisor’s office. Employees of the supervisor must comply with procedures for the chain of custody of ballots as required by s. 101.015(4).”

As the three-member panel of judges for the Eleventh Circuit describes in its order (pdf): “The district court’s determination regarding the legislature’s intentional discrimination suffers from at least two flaws, either of which justifies a stay.”

“In its assessment of SB90’s historical background, the district court led with the observation that ‘Florida has a grotesque history of racial discrimination.’ It began its survey of that history beginning immediately after the Civil War and marched through past acts of ‘terrorism’ and ‘racial violence’ that occurred during the early and mid-1900s. And it concluded by seeming to chide the Supreme Court for suggesting that ‘[o]ur country has changed’ since the Voting Rights Act was enacted in 1965.”

The judges also ruled that “the district court failed to properly account for what might be called the presumption of legislative good faith.”

Chief Judge Mark Walker of the U.S. District Court for the Northern District of Florida, appointed by President Barack Obama in 2012, said the law is discriminatory and ruled the measure to be unconstitutional on March 31. Walker also issued a permanent injunction barring enforcement of the bulk of the new rules.

“We are pleased to see that the Eleventh Circuit Court of Appeals has stayed the district court’s injunction of SB 90, our State’s 2021 election integrity law,” Christina Pushaw, press secretary for DeSantis, said in a statement to The Epoch Times. “We expect this law to stand up to any further legal scrutiny.”

Despite partisan criticism, Pushaw insisted Florida’s election integrity laws are constitutional because they protect every voter.

“Safeguarding the integrity of elections is not only necessary—it’s common sense, noting that the real source of voter suppression is election fraud. It invites undue, outside influence into the election process and jeopardizes the fundamental American assurance that everyone gets one equal vote and every legal vote counts. We will always guard against fraud in elections in Florida,” she said. “This year, Floridians can cast their ballots with the confidence that their vote will count.”

During comments delivered at an April 25 press conference in Spring Hill, Florida—where DeSantis signed Senate Bill 524 into law—Florida Secretary of State Laurel Lee said, “In Florida, we make it easy to vote but hard to cheat.”