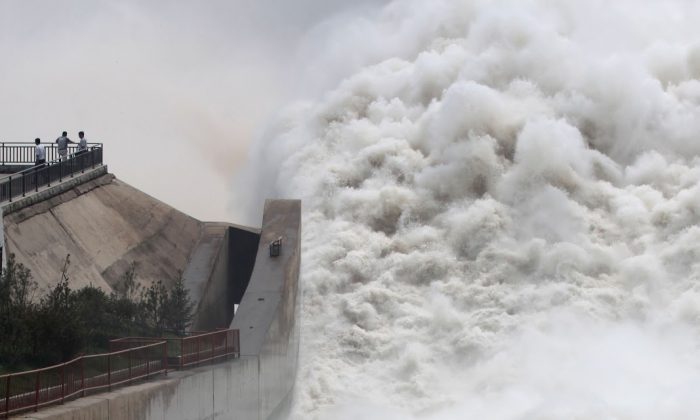 Continuous rainfall for more than ten days has caused the lower reaches of the Luo River in China’s west to spill their banks. Large volumes of floodwater released from upstream have destroyed two dams in one county, and villages are flooded. Local jujube growers and those in animal husbandry have suffered serious losses.

The autumn harvest is at a severe loss in Dali County of Weinan city, Shaanxi Province, where 108 villages have been affected by floods.

According to local media reports, Dali County has experienced heavy rains this fall. Water levels in the Wei River and Luo River running across the province have exceeded their warning levels, with some areas experiencing serious floods.

In Dali’s Zhaodu town, about 29,000 acres of farmland were flooded, and 25,126 people had to be urgently evacuated.

As to the reason for the flooding, some locals have voiced suspicion that it’s caused by the local authorities intentional release of floodwaters to protect other areas.

Xin Ming (alias), a villager in Xinsi village, Zhaodu town, told the Chinese-language Epoch Times that he believes that in order to protect Gansu Province and Henan Province, the authorities quickly released a large volume of water into the Dali area, bursting local river banks.

“The village was completely submerged, about two meters (6.6 feet) deep, and the houses and furniture were all immersed in the water,” he said.

Posts on social media by other local villagers in the disaster-stricken areas, across Zhaodu and Dali County, also said, “In order to protect Gansu Province in the upper stream, and Henan Province in the lower stream, [authorities in] Shaanxi Province opened their own gates for two flood releases. The flood passed through Dali, and the dam broke.”

The Epoch Times could not verify this information. After contacting the Flood Control Command of Dali County, a staff member said that they did not release floodwaters at this time.

At 6 a.m. on Oct. 9, villagers suddenly received a notice from township officials ordering them to evacuate immediately.

Xue Fei (alias), an animal husbandry farmer in Zhaodu, told The Epoch Times, “The water is rising rapidly, and the time for people to evacuate was very short, in a rush. Cows and pigs were killed by the flood, and the farmers have suffered particularly great losses.”

Dali County is known for its jujube plantations. It has been recognized by the central authorities for its high-quality agricultural products, like the famous “Dali Jujube.” Most local villagers grow jujube to support their livelihoods. It’s harvest season now, but the floods have ruined this year’s crop.

Xin’s 5-acre plantation of jujube trees was all destroyed after being soaked in floodwater.

The Epoch Times has obtained a video showing the flooding in Dali County.

After the flooding disaster, non-government relief materials were sent to the area in batches. But after the local government took over control of the distribution of aid, no aid has been reaching villagers outside the big towns.

The weather has been getting cold, Xin said. “We are short of quilts, cotton-padded clothes, and daily necessities, and the villagers do not even have enough shirts and pants.”

Hong Ning contributed to the report.