Flights to Get More Expensive ‘Without a Doubt,’ Air Transport Association Chief Warns 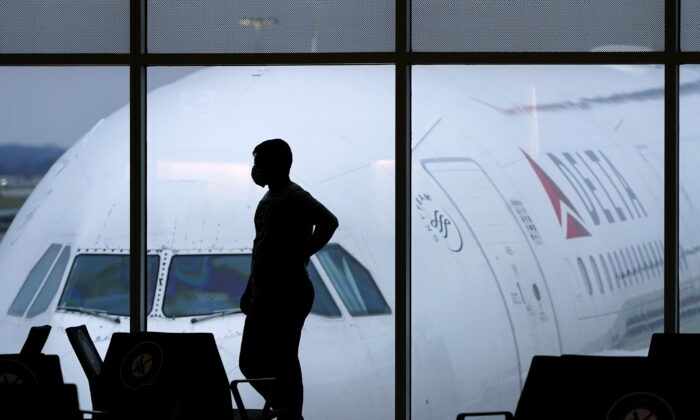 A passenger wears a mask as he waits for a Delta Airlines flight at Hartsfield-Jackson International Airport in Atlanta on Feb. 18, 2021. (Charlie Riedel, File/AP Photo)
By Katabella Roberts

Flight prices are set to rise even further as fuel prices continue to soar, Willie Walsh, director-general of the International Air Transport Association (IATA), has warned.

Walsh, who previously served as CEO of Aer Lingus and British Airways, told the BBC’s “Sunday Morning” that airlines would ultimately be forced to pass higher oil prices onto customers in the form of higher ticket prices as oil prices remain volatile.

Flight prices have already risen substantially in recent months amid a resurgence in demand for air travel as economies across the globe recover from the COVID-19 pandemic.

Russia’s invasion of Ukraine has further exacerbated oil prices owing to Western sanctions against Moscow, with the Biden administration announcing a complete ban on oil imports from Russia, while the UK and European Union hope to gradually phase out Russian supplies.

In the past year alone, the consumer price index for airline tickets has risen by 25 percent, according to official data, while fares rose 19 percent between March and April alone, according to a report from Adobe published on May 12.

According to AAA, holiday airfares over the Memorial Day weekend in May cost Americans roughly $160 more on average than a year ago.

As prices continue to soar, travel industry experts have suggested that travelers who have not already booked their summer vacations do so as early as possible as airfares look set to rise even higher over the summer.

‘Flying Will Be More Expensive for Consumers’

“Flights are getting more expensive because of the high price of oil and it has been clear to everybody that will be reflected in higher ticket prices,” Walsh said on Sunday. “Flying will be more expensive for consumers, without [a] doubt.”

Walsh added that “oil is the single biggest element of an airline’s cost base” and that it is “inevitable that ultimately the high oil prices will be passed through to consumers.”

The IATA director-general’s comments come as airlines across the United States and the rest of the world also struggle with chronic labor shortages which have led to thousands of delays and cancellations to flights, sparking outrage among passengers.

U.S. Transportation Secretary Pete Buttigieg told Fox News on Sunday that the government has investigated a number of airlines over passenger-refund-related issues and has launched another 10 investigations that it plans to pursue.

Buttigieg did not name the airlines but stated that the administration aims to ensure that consumers and passengers are protected when it comes to getting refunds for delayed and canceled flights in a timely manner.

“We’ll collaborate with airlines when they’re ready to take steps that are positive and proactive, whether that’s improvements in pay that are helping with hiring or flexibility in customer service,” Buttigieg told Fox News.

‘Should Have Prepared Better’

Elsewhere on Sunday, Walsh told the BBC that London’s Heathrow Airport “should have prepared better” to avoid disruption to flights this month after chaos erupted at the airport over delays and cancellations, along with issues surrounding lost items of luggage.

“They were arguing that airlines should be operating at least 80 percent of their slots through the summer period,” Walsh said. “They clearly did not provide sufficient resources to deal with that level of activity, so you would have to be critical of Heathrow.”

Heathrow, which has warned that more cancellations may be on the horizon this summer, said that 6 million passengers traveled through the airport in June, the equivalent of 40 years of growth in just four months.

Meanwhile, 25 million had traveled through the airport in the first six months of 2022, compared with only 19.4 million passengers throughout the entire year of 2021.

“Despite our best efforts there have been periods in recent weeks, where service levels have not been acceptable, with long queue times, delays for passengers with reduced mobility, bags not travelling with passengers or arriving late, and we want to apologize to any passengers who have been affected by this,” it said in a statement on Monday.