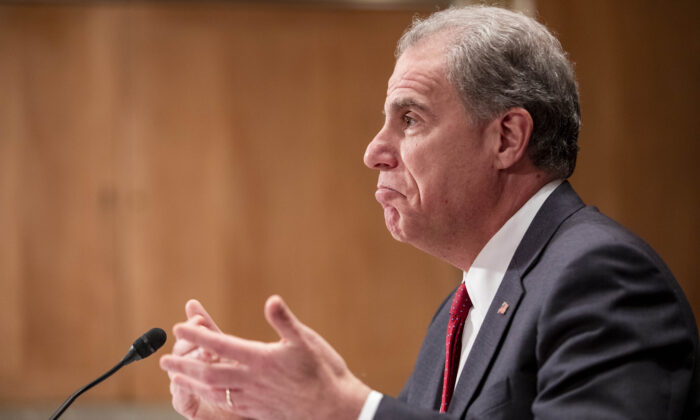 Department of Justice Inspector General Michael Horowitz testifies before the Senate Committee on Homeland Security and Governmental Affairs during a hearing at the Capitol in Washington on Dec. 18, 2019. Samuel Corum/Getty Images
Viewpoints

Fix the Foreign Intelligence Surveillance Court, and Punish the Crooks Who Abused It

The damage done to American public trust in the court is not incidental. Trust is a source of strength, among friends or in the world’s most powerful nation. Trust promotes cooperation, which enhances systemic strength. When trust disappears, expect discord seeding division and weakness.

The FISC was created to protect a citizen’s constitutional rights while permitting intelligence community surveillance of legitimate suspects. To protect necessary cloak-and-dagger secrets, the FISC meets in secret. A secret court in a free society requires two things: (1) legitimate existential threats to citizens and assets; and (2) trust in security agency professionalism and integrity, and trust in the judgment of the court judges.

Unfortunately, the abuse of the FISC by corrupt members of U.S. security and legal agencies—specifically within the FBI and DOJ—may have squandered that trust forever. Evidence is emerging that other corrupt actors, perhaps in the CIA, conducted illegal surveillance.

A FISC with integrity must also protect an American citizen’s constitutional rights from crooks and crony government. Horowitz discovered premeditated fraud on the FISC by a DOJ attorney. In 2016, the attorney “altered” email from “the other U.S. government agency” (CIA) and submitted a fraudulent application for a warrant to the court. So the FISC approved the warrant.

Following Horowitz’s report, the FISC’s then-presiding judge, Rosemary Collyer, issued a public order regarding the Page application and the FBI’s lack of “candor”: “The frequency with which representations made by FBI personnel turned out to be unsupported or contradicted by information in their possession, and with which they withheld information detrimental to their case, calls into question whether information contained in other FBI applications is reliable. The FISC expects the government to provide complete and accurate information in every filing with the Court.”

Collyer should chastise herself as well. She and her colleagues failed to responsibly question the application. The FBI alleges a Naval Academy grad, associated with a presidential campaign in an election year, is a Russian asset? Judge, wake up. Page was actually a CIA asset.

Trump administration Attorney General William Barr knows the court is a national security asset and wants to save it. On Feb. 6, he put his personal reputation on the line and issued a memo requiring the FBI to have him sign off on FISC applications. Harvard Law School professor Alan Dershowitz pegs the FISC’s structural weakness: Alleged perpetrators have no defender.

So, assign a lawyer to question government evidence.

To restore public trust, the individuals who abused the court must be investigated, arrested, tried, convicted and sent to prison. They committed an array of crimes—including criminal mishandling of classified material. The FISC is a classified court.

In the past, the public expected responsible reporters to scrutinize government operations. In the FISC saga, contemporary mainstream media served as a PR tool for crooked cops and spies. So-called elite press outfits like The New York Times and The Washington Post unquestioningly touted intelligence leaks that have proven to be false.

Though mainstream media outlets take scant notice, angry calls to disband the court have not faded. The decibels will increase when federal prosecutor John Durham’s investigation into the origins of the Russia collusion hoax becomes headline news.

I wager Durham will expose crony government at its worst—dirty government officials, bureaucrats and agents who are politically exploiting and criminally manipulating the U.S. national security structure to harm their political opponents.