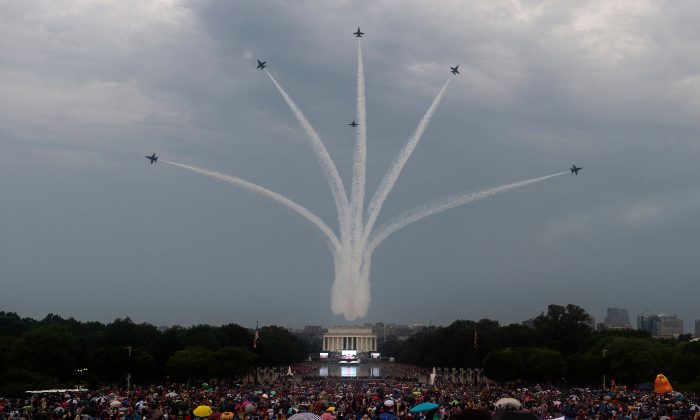 The Blue Angels (six F-18s) fly overhead as people gather on the National Mall for the "Salute to America" Fourth of July event with US President Donald Trump at the Lincoln Memorial in Washington, DC, July 4, 2019. ANDREW CABALLERO-REYNOLDS/AFP/Getty Images
Viewpoints

As soon as the news broke that President Donald Trump was going to ramp up the usual Fourth of July festivities in Washington, with flyovers, tributes to every branch in our armed forces, and—wait for it—tanks, the mainstream media erupted with criticism, scolding, and even accusations that this meant Trump was morphing into a dictator before our very eyes.

Turns out, the celebration wasn’t an omen of totalitarianism at all but an incredible tribute to the members of our nation’s military and an appropriate homage to our declaration to be independent from the once-tyrannical Britain.

Here’s five reasons why I thought the “Salute to America” was a huge success.

President’s Speech Had Nothing to Do With Him

Remember that time in April when former President Barack Obama gave a speech in Germany and referenced himself 392 times? Not this president—or at least, not this July Fourth.

Though Trump spoke for at least an hour, he rarely spoke about himself. Instead, he spent his time combing through our nation’s story, from 1775 to now, weaving in and out of historical references, military acknowledgments, accolades to American heroes, and encouragement. It was hardly political, and 100 percent patriotic; Trump didn’t even use America’s current status as a jumping-off point to boost his own status as president.

It wasn’t a Trump show; it was an America show.

And as well it should be, because any historian—or student of America—knows America is who she is not because of any one president or person or act of Congress, but because of a swath of people and ideas and grit and courage all coming together to make her independent.

I’m no historian, but as a lover of history, I enjoyed Trump’s near-constant mini historical narratives, weaving together a tapestry of tales about our country’s founding and our military that has kept us free. From the American Revolution and World War II to references to “Devil Dogs” and Navy SEALs, Trump offered stories about our country’s past many people may not have heard.

His speech likely wasn’t perfect—he made an odd comment about “airports”—but he’s only human; mistakes happen. The effort to jam into an hour-long speech as many historical anecdotes about our country as kids should be learning in an hour-long history lesson in school was great. Plus, heroes of our nation’s past, whether civilian or military, deserve to be honored in a speech 100 years later: What would we be without any one of them?

We Should Praise Our Military on July 4

The whole of Trump’s speech mostly focused on honoring the military. I expected a few mentions but, instead, it made up the bulk of his speech. He went through every single branch, gave powerful anecdotes describing notable battles that that branch had participated in, and pointed out several heroes from each.

Not only did Trump honor the military but he also did so for the entire time, failing to make one political statement in the speech. Because of the brave members of the U.S. military, America has remained true to her Declaration of Independence. They have defended us at home and abroad, and they deserve an entire chorus of accolades.

Several media outlets have complained about the cost of Trump’s flyovers—and they weren’t cheap. While I, too, would prefer a fiscally responsible government, a show of pride, unity, and, yes, strength, has its place in the optics of politics and boosting morale.

There are many terrible sounds of freedom: a soldier’s cry as he takes his last breath; a widow back home gasping as she receives the news. But there are other, awe-inspiring, sounds of freedom too: the B-2 Stealth Bomber that flew overhead during that speech is one of those.

In the 3rd flyover of the evening, the @usairforce's B-2 Stealth Bomber and two F-22 Raptors flew over the crowds and past the Lincoln Memorial. #SaluteToAmerica #4thofJuly #IndependenceDay pic.twitter.com/7TeaUxqqJb

I knew as soon as I saw the massive crowd gathered on the rainy National Mall that liberals and “Never Trumpers” wouldn’t like the way Trump was honoring America: too expensive, too corny, too simple. After all, The New York Times claims America isn’t worth celebrating like that because she’s really not that great. I disagree. No, Trump isn’t the greatest speaker in the world; he likely won’t go down in history as the greatest president America has known. But I still think America is pretty great.

We are citizens of the most free, powerful, generous, and law-abiding country in the history of the world. The idea that America should be ashamed of its strength and prosperity is a lie propagated by liberal (and even conservative) detractors. Trump’s celebration was a show of liberty, patriotism, and the ideas that make her unique.