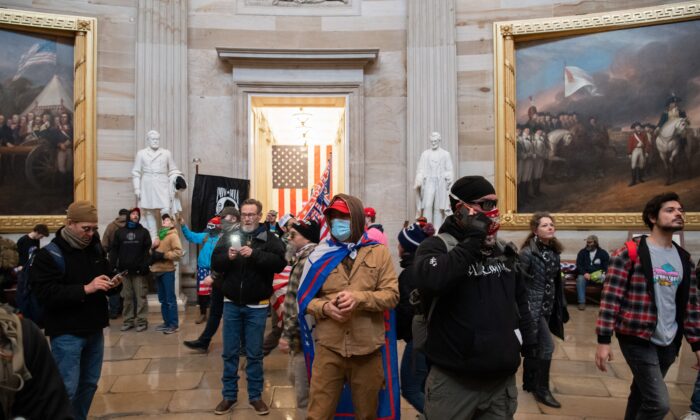 Protesters walk around in the Rotunda after breaching the U.S. Capitol in Washington on Jan. 6, 2021. (Saul Loeb/AFP via Getty Images)
Crime and Incidents

Five members of a family were arrested on July 13 for allegedly breaching the U.S. Capitol building through a broken window on Jan. 6, when the joint session of Congress was certifying the 2020 presidential election results.

Joshua Munn, 24, was arrested in Melrose, Wisconsin. He was released after an initial federal court appearance in Madison, Wisconsin.

His father, Tom Munn, 54; his mother, Dawn Munn, 55; and his sisters, Kristi Munn, 29, and Kayli Munn, 18, were arrested in Borger, Texas, according to court records. All were booked into the Randall County Jail pending their initial court appearances on July 14; jail records showed no attorneys representing them.

On Jan. 9, the FBI received information from a tipster, a relative of Kristi Munn’s fiancé, that Kristi Munn had entered the Capitol on Jan. 6. The FBI then investigated the case.

In the criminal complaint (pdf), the FBI claimed the five members of the Munn family “were unlawfully inside the U.S. Capitol on January 6, 2021.”

The complaint showed photos and remarks the family members posted on Facebook and Snapchat, along with screenshots from security footage. Some remarks were private messages obtained through federal search warrants.

For example, the complaint shows a Facebook conversation between Dawn Munn and Kelsi Munn on Jan. 6:

Dawn Munn wrote, “We stormed in….went in and out [a] broken window!!” Kelsi Munn replied, “Who broke a window????? … That’s way cool tho.” Dawn Munn replied, “They barricaded the door so they took out [the] window…climbed in!!!”

“Made it back to the hotel about an hour ago … Have lots of pics and video to follow … I need to tell you all that the media is LYING TO YOU…the DC police opened up on a small group climbing the scaffolding, with gas grenades … The only damage to the capital building was several windows and sets of doors. Nothing inside the capital was damaged. … I can tell you, patriots NEVER made it to the chamber. There was no violence in the capital [sic] building, the crowd was NOT out of control…they were ANGRY!!! … They are now calling this and [sic] insurrection…?”

Last week, the Department of Justice announced that more than 535 people from nearly all 50 states had been arrested. About 10 individuals have pleaded guilty to a variety of federal charges, ranging from misdemeanors to felony obstruction.

“The Department of Justice’s resolve to hold accountable those who committed crimes on January 6 has not, and will not, wane,” the statement reads.

The department has committed to paying more than $6 million to a multinational firm to create a database to host data against accused participants in the Jan. 6 breach.