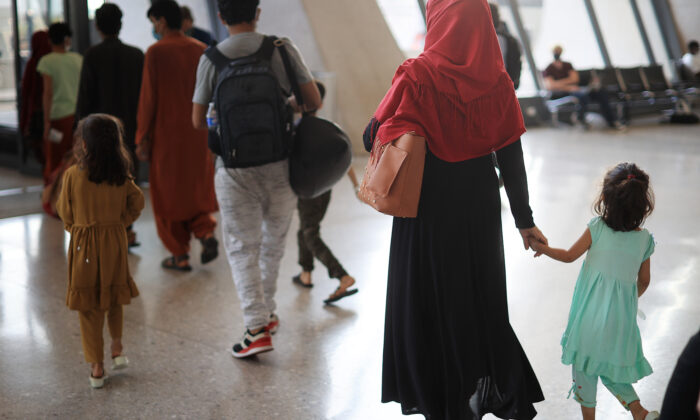 Five Afghans Flown to US Diagnosed With Measles

Five people who were recently evacuated to the United States from Afghanistan were confirmed to have measles, Virginia health officials said Tuesday.

“All recently entered the United States as part of Operation Allies Welcome, the U.S. federal government’s emergency evacuation of citizens of Afghanistan,” a spokeswoman for the Virginia Department of Health told The Epoch Times via email.

Health officials are reaching out to people who may have been exposed to the five individuals. At least one was at a hospital in the Richmond area on Sept. 10. And some or all were at Fort Pickett, a U.S. military base, in Nottoway County at some point.

Evacuees have first been taken to military bases in third countries like Germany before being moved on after being vetted.

The evacuation effort is ongoing even after U.S. troops withdrew from Afghanistan, but was temporarily paused at the request of the Centers for Disease Control and Prevention (CDC) because several Afghans were diagnosed with measles after arriving in the United States, White House press secretary Jen Psaki said Friday.

The temporary pause was extended for at least seven additional days from Monday, according to the Pentagon.

John Kirby, the Pentagon’s spokesman, told reporters that one case was diagnosed at Fort McCoy, one case was found at Fort Pickett, and three were found among Afghans who flew into Dulles Airport in Virginia.

“They have been housed separately and are receiving medical care, and the CDC is doing contact tracing, and we’ll [ask] people to self-isolate as needed,” Kirby said, adding that the cases are being taken seriously.

The CDC did not respond to a request for comment. The agency describes measles as a highly contagious disease that can spread to others through coughing and sneezing.

“Measles is so contagious that if one person has it, up to 90 percent of the people close to that person who are not immune will also become infected,” the CDC says on its website. “Infected people can spread measles to others from four days before through four days after the rash appears. Measles virus can live for up to two hours in an airspace after an infected person leaves an area.”

Afghanistan is in the top 10 countries with global measles outbreaks, according to provisional monthly data reported to the World Health Organization.

Most Americans get measles vaccines when they are young, though the number of measles cases have been increasing in the country in recent years.

All Afghans who enter the United States are required to be vaccinated for measles but the vaccines are being administered at military bases. Officials are looking into vaccinating people before they enter the country.