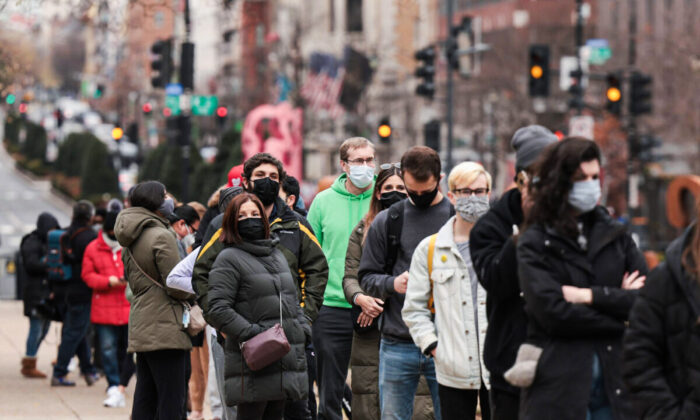 People wait in line at a testing site to receive a free COVID-19 PCR test in Farragut Square in Washington, on Dec. 28, 2021. (Anna Moneymaker/Getty Images)
AMERICA

A Los Angeles County COVID-19 testing site confirmed the first local case of “flurona,” or influenza combined with the CCP (Chinese Communist Party) virus that causes COVID-19, coming after a teen in Texas confirmed he was diagnosed with the two viruses.

“It was a family visiting from Mexico, from Cabo San Lucas,” Steve Farzam, the head of 911 COVID Testing, told KNBC-TV. “Some very mild symptoms, almost could be easily confused with sinusitis.”

The pair had recently returned from a vacation in Cabo San Lucas, Mexico, the company said.

Farzam said the child did not require hospitalization and went home with their parents after the testing was completed.

The Epoch Times has contacted the Los Angeles County Department of Health, which has not yet commented on the diagnosis.

COVID-19 and the flu are two respiratory diseases caused by separate viruses.

In Houston, Texas, a 17-year-old boy told ABC13 that he was diagnosed with both COVID-19 and the flu but said it was mild.

“I ended up getting tested the day before Christmas for strep throat, flu, and COVID,” said Alex Zierlein. “I didn’t think I had any of the three. It felt like a mild cold.”

Reports last week said a pregnant woman in Israel tested positive for COVID-19 and the flu. The unidentified woman was diagnosed with the rare double infection when she arrived last week at the Rabin Medical Center in Petah Tikvah, officials told the Times of Israel.

“She was diagnosed with the flu and coronavirus as soon as she arrived,” said Arnon Vizhnitser, director of the hospital’s Gynecology Department, told the Hamodia news outlet. “Both tests came back positive, even after we checked again,” he continued, adding that “the disease is the same disease. They’re viral and cause difficulty breathing since both attack the upper respiratory tract.”

The woman only experienced mild symptoms for both the flu and COVID-19, authorities said.

About 85,000 Americans are in the hospital with COVID-19, just short of the Delta-surge peak of about 94,000 in early September, according to the Centers for Disease Control and Prevention. The all-time high during the pandemic was about 125,000 in January of last year.

But the hospitalization numbers do not tell the full story. At least some cases in the official count involve mild or symptom-free infections that weren’t what put the patients in the hospital in the first place.

Dr. Fritz François, chief of hospital operations at NYU Langone Health in New York City, said about 65 percent of patients admitted to that system with COVID-19 recently were primarily hospitalized for something else and were incidentally found to have the virus.

Joanne Spetz, associate director of research at the Healthforce Center at the University of California, San Francisco, said the rising number of cases like that is both good and bad.