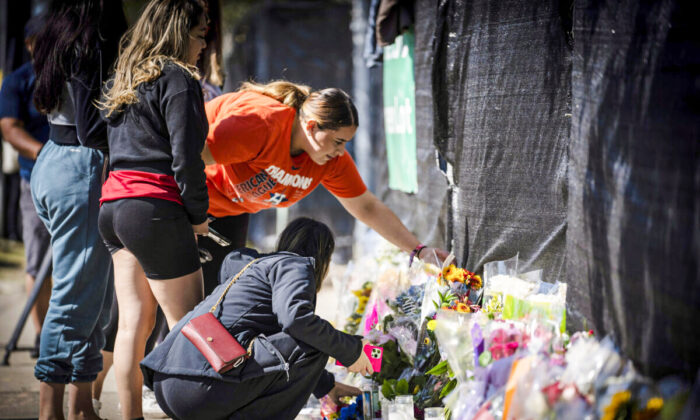 Stacey Sarmiento places flowers at a memorial in Houston on Sunday, November 7th, 2021 in memory of her friend Rudy Pena who died in a crush of people at the Astroworld music festival on Friday. (AP Photo/Robert Bumsted)
By Melanie Sun

Rappers Travis Scott and Drake, as well as the Astroworld concert organizers, are facing at least three lawsuits after a tragic crowd surge at their concert in Houston left eight dead and around 300 injured on Friday night.

Legal action has been filed on behalf of three concertgoers, with more claims expected by lawyers.

Texas attorney Thomas J. Henry has filed a lawsuit on behalf of one victim and is “providing immediate consultations to all injured victims as well as to families who had loved ones hurt or killed at the concert,” according to a press release.

Travis Scott, Aubrey Drake Graham, and concert organizers Live Nation Entertainment Inc, and NRG Stadium are listed as defendants in the lawsuit. The complaint, obtained by Daily Mail, lists Kristian Paredes, a 23-year-old from Austin, Texas, as the plaintiff.

Some witnesses have said they believe that the chaotic crowd surge toward the stage happened after 9 p.m. as rapper Drake, whose real name is Aubrey Drake Graham, made an unannounced appearance next to Travis Scott, whose real name is Jacques Bermon Webster, after which the crowd went crazy.

City officials have confirmed that people were trampled under the crowd, with more than 300 needing treatment for injuries at the emergency field hospital on site. Another 25 were sent to hospital, of which 11 suffered cardiac arrest. The youngest injured at the concert was 10 years old, officials said.

Concertgoers near the stage who were impacted the most by the crowd surge, have described being squeezed to the point of not being able to breathe or stand on their own feet. Some have described being at the mercy of the moving crowd and having seen people fall and disappear under the mass of people after losing their footing.

Video posted on social media also show scenes of people scrambling to help unconscious concertgoers as the rappers performed on stage and the loud music continued to blare through the venue. In one post, a woman climbs up to a cameraman to alert him to the people being trampled in the crowd. Another man climbed up with her as they called for organizers to stop the show.

Billy Nasser, 24, who had traveled from Indianapolis to attend the concert, said things got “really crazy” about 15 minutes into Scott’s set, and people began crushing one another. He said he “was picking people up and trying to drag them out.”

Nasser said he found a concertgoer on the ground. “I picked him up. People were stepping on him. People were like stomping, and I picked his head up and I looked at his eyes, and his eyes were just white, rolled back to the back of his head.”

Concertgoers have complained that both rappers continued with their performance even as they saw emergency vehicles arrive and responders attempted to reach those in need of medical assistance, according to lawyers.

“There is every indication that the performers, organizers, and venue were not only aware of the hectic crowd but also that injuries and potential deaths may have occurred,” Henry said. “Still, they decided to put profits over their attendees and allowed the deadly show to go on.”

Travis Scott did pause the show at least three times to ask people to make way for people who needed help, but the show ultimately went on until a “mass casualty incident” was declared around 9:30 p.m. It took until 10:10 p.m. for organizers to end the stage performance, according to Houston officials, who said the decision had to take into account the risk of rioting by the young crowd.

Travis Scott said in a statement posted on Twitter on Saturday that he is “absolutely devastated by what took place last night” and promised his total support to city investigators in their probe of events that lead to the tragedy.

“I am committed to working together with the Houston community to heal and support the families in need. Thank you to Houston PD, Fire Department and NRG Park for their immediate response and support,” he said.

His girlfriend Kylie Jenner also posted to Instagram about the tragedy, saying that “Travis and I are broken” after learning about the horrible situation in the crowd.

“I want to make it clear we weren’t aware of any fatalities until the news came out after the show and in no world would have continued filming or performing,” she said.

Live Nation also said in a statement that they were “heartbroken for those lost and impacted.”

“We continue to support and assist local authorities in their ongoing investigation so that both the fans who attended and their families can get the answers they want and deserve,” the organizer told The Epoch Times in an email.

“Throughout the weekend, we have been working to provide local authorities with everything they need from us in order to complete their investigation,” it added in an update on Monday. It said it is offering refunds on all concert tickets and helping families with medical and mental health services.

Another plaintiff, 21-year-old Noah Gutierrez, has filed a lawsuit over the concert. His attorney, Ben Crump, said he expects to be filing further legal action on behalf of more victims later next week.

Gutierrez described a scene of chaos and desperation, in which he and other concertgoers in the VIP section worked to lift people screaming for help from the floor.

“We are hearing horrific accounts of the terror and helplessness people experienced—the horror of a crushing crowd and the awful trauma of watching people die while trying unsuccessfully to save them. We urge others who suffered physical or emotional injury or witnessed the events of that day to contact us and share their stories,” Crump said in a statement.

“We will be pursuing justice for all our clients who were harmed in this tragic and preventable event.”

A third lawsuit was filed on Saturday in Harris County District Court by concertgoer Manuel Souza, reported Billboard. He has sued Travis Scott, Live Nation, and organizer ScoreMore for allegedly failing to “properly plan and conduct the concert in a safe manner,” according to attorney Steve Kherkher.

Update: This article has been updated to include comments from Live Nation.