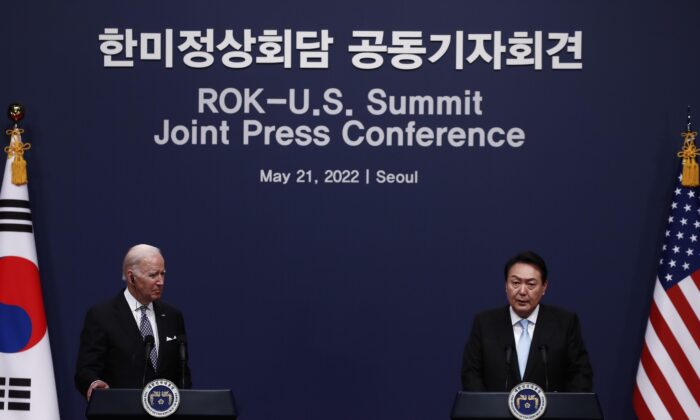 President Joe Biden, on Friday, landed in South Korea on his first trip to Asia since taking office. The five-day itinerary, which will also take him to Japan, aims to strengthen Indo-Pacific alliances to counter Chinese influence.

The Samsung Electronics Pyeongtaek Campus is one of the world’s largest semiconductor factories, accounting for approximately 15 percent of global memory chip production, according to The Korea Times.

During the tour, Biden underscored South Korea as a “reliable, trusted partner with shared values” amid the Russia-Ukraine war and the growing Chinese influence that has destabilized the global supply chains, posing a grave threat to economic and national security.

Yoon said he shares Biden’s view and that “Biden’s visit to Pyeongtaek Campus … manifests the significance of semiconductors in economic and national security [and recalls] the meaning of the Korea-U.S. global comprehensive alliance through semiconductors,” The Korea Times reported.

On May 21 local time, Yoon and Biden held their first summit at the new presidential office in Seoul’s central district of Yongsan. The two leaders reportedly discussed a range of security and economic challenges facing the allies and the region, including North Korea’s nuclear program and supply chain risks, Yonhap News Agency reported.

According to the joint statement issued after the summit, the two leaders committed to cooperating closely through the Indo-Pacific Economic Framework (IPEF), deepening economic engagement on priority issues, including the digital economy, resilient supply chains, clean energy, and other priorities geared toward promoting sustainable economic growth.

The White House briefing on Feb. 11 introduced an Indo-Pacific economic framework (IPEF) that outlines the United States’ key priorities to align with allies and partners in order to compete more effectively with China in a technology race.

The strategy addresses China’s much more assertive and aggressive behavior in the Indo-Pacific region and the importance of establishing a high-tech supply chain without China.

“Both leaders agree to initiate discussions to expand the scope and scale of combined military exercises and training on and around the Korean Peninsula,” the joint statement said.

Kim Tae-hyo, first deputy director of the presidential National Security Office, told reporters earlier this week that the first thing the two sides will do during the summit will be to come up with an “action plan” for how South Korea and the United States will “strengthen the reliable and effective extended deterrence,” Yonhap reported.

The Extended Deterrence Strategy and Consultation Group (EDSCG) was established in 2016 by the Trump and Moon Jae-in administrations to ramp up discussions over various measures on extended deterrence against North Korea. But its talks have not been held since 2018, as both the United States and South Korea then worked on holding a summit with North Korea.