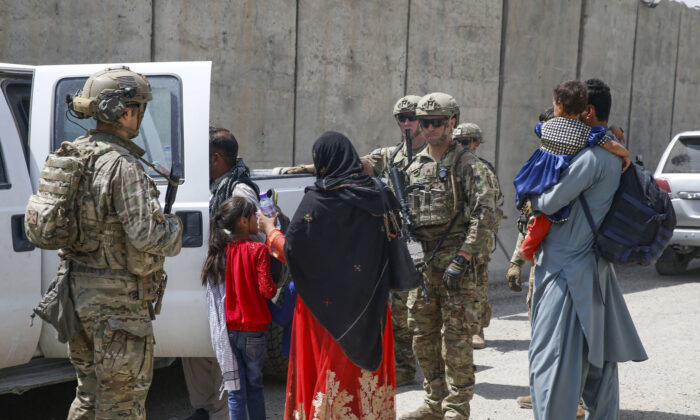 First Afghans Land in US as Massive Evacuation Effort Continues

Afghan evacuees have landed in the United States for the first time since the Taliban took over their home country, U.S. officials said on Aug. 21.

“There are now Afghans, in just one week after beginning this operation, that have left Afghanistan and will be transitioned to Fort Bliss today,” Taylor said.

Many of the Afghans have been granted special immigrant visas under section 602(b) of the Afghan Allies Protection Act of 2009, largely because of the assistance that they or their family members rendered to U.S. troops following the U.S. invasion of Afghanistan in 2001.

About 34,500 such visas have been allocated since December 2014, and some interpreters who received them landed at Fort Lee in Virginia last month.

The new groups of evacuees were slated to be taken to Fort Bliss in Texas. Defense Secretary Lloyd Austin approved that fort and two others, Fort McCoy in Wisconsin and Fort Lee in Virginia, to temporarily house the special visa applicants, their families, and other Afghans at risk.

The evacuees, who weren’t required to test negative for COVID-19, were vetted by intelligence, law enforcement, and counterterrorism professionals, according to Taylor.

The government experts “are surging resources to evaluate all of these evacuees to ensure protection of the homeland,” he said.

Space for up to 22,000 evacuees was cleared, military officials have said. That number could ultimately end up being higher, however. President Joe Biden said that it could reach as high as 65,000.

The United States is flying Afghans, Americans, and others from the Hamid Karzai International Airport to Germany and elsewhere before the flights continue on to the United States, following the recent Taliban takeover of Afghanistan.

About 17,000 people have been evacuated from Afghanistan by the United States since Aug. 14. Approximately 2,500 of them were Americans, Taylor told reporters.

Despite expressing hope that the number of people being flown out of Afghanistan per day could soon reach 9,000, the pace of evacuations has slowed as U.S. officials try to process the streams of people who want to leave the country and Americans trying to return home, while keeping the airport secure.

In the past 24 hours, just 3,800 people were flown out on six U.S. military flights and 32 charter flights. That’s down by nearly 2,000 people from a recent 24-hour period, and likely stems from an hours-long shutdown of flights that U.S. officials described as a pause to process special visa applicants.

Taliban fighters control the area outside the airport. They’ve been checking people’s documents at various checkpoints. Biden said on Aug. 20 that people with U.S. passports are being let through, though some Americans have said they were blocked by militants, and there are reports of terrorists beating Americans in Kabul.

Governors across the nation have said they would welcome Afghan evacuees to their states.

“We are eager to continue that practice and assist with the resettlement of individuals and families fleeing Afghanistan, especially those who valiantly helped U.S. troops, diplomats, journalists, and other civilians over the past 20 years,” Utah Gov. Spencer Cox, a Republican, said in a recent statement.

“We’re already working in terms of a lot of those refugees coming in and working with [community groups] and nonprofit organizations to make sure that they feel welcome and celebrated as members of our community,” he said.

Editor’s Note: This article has been updated with the number of Americans evacuated.