Fired Professor With ‘Anti-Woke Position’ Fights to Regain Her Job

Her dismissal is a move in a ‘frightening’ direction against academic freedom, says Mount Royal University professor 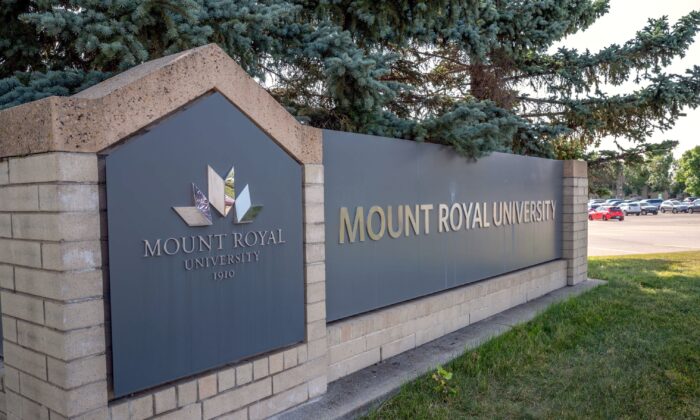 The sign at the entrance to Mount Royal University in Calgary on Sept. 4, 2020. (Jeff Whyte/Shutterstock)
By Lee Harding

A Calgary professor who says she was fired for her stance on issues such as Black Lives Matter, indigenous residential schools, and the relationship between gender and biological sex has filed a grievance against her dismissal and will crowdfund the fight to regain her job.

Frances Widdowson, a tenured associate professor in the department of economics, justice, and policy studies, was fired by Mount Royal University (MRU) on the day of fall-semester final exams on Dec. 20 last year.

In a letter to Widdowson that day, MRU president Tim Rahilly listed 12 reasons for her dismissal, including complaints from students, external parties, former colleagues who left because of her, and her contribution to a “toxic workplace environment … negatively impacting the mission and reputation of the university.”

In an interview with The Epoch Times, Widdowson said her dismissal sets a damaging precedent for academic freedom.

“If it doesn’t get overturned, it means universities as we used to know them are over. It is really, really terrible. And for many years, I obviously wasn’t a popular figure in the university system, but I was tolerated and it was understood that I had a place within the university. And now that understanding doesn’t exist anymore,” she said.

“We are moving in a direction which actually is quite frightening, because anyone who steps outside of the dogma that has been demanded is going to find themselves in serious trouble. And that is going to have a terrible impact on what can be talked about in the university system.”

She said her stances on “trans activism, indigenization, and anti-racist initiatives” were the primary ones that got her into trouble.

“Any kind of information pertaining to any of those areas are already seriously compromised. And after what happened to me, it’s really going to mean that people are going to be very cautious—very, very cautious—if they enter into those areas, which is very concerning for the state of the knowledge that is being put forward in universities.”

The collective agreement between the MRU board of governors and the Mount Royal Faculty Association includes an “academic freedom” provision that gives staff “freedom from institutional censorship.”

The school’s Expression and Free Speech Policy states, “The University will not suppress presentations or debate whether or not the points of view being expressed are thought to be offensive, unwise, immoral, extreme, harmful, incorrect or wrongheaded.” It also states, “Members of the University community have the right to criticize and question the points of views expressed by others at the University, but may not obstruct or interfere with the free speech of others.”

But MRU faculty members still called for ending speech of a colleague they didn’t agree with.

One MRU professor tweeted that universities should “absolutely fire racists who deny the real harm of the residential schools.”

In another case, an Indigenous Studies professor wrote a 25-page complaint letter to administrators because she could not abide Widdowson’s presence. The letter said that Widdowson would not capitalize “Indigenous” and spelled the school’s Equity, Diversity, and Inclusion policy as “DIE” instead of “EDI.” It also said that “Widdowson did not acknowledge my presence at MRU for the first two years of my employment. To ignore someone is to make them invisible.”

A petition at Change.org titled “Fire Frances Widdowson – a Racist Professor at MRU” launched in 2020 gained over 6,000 signatures.

In mid-2021, Widdowson made an alter ego on Twitter called “francXs mcgrath (not frances widdowson)” that made a parody of those who believed radar-penetrating scans showing ground disturbances found to be unmarked graves represented certain proof of genocide. On July 13, 2021, MRU’s student association issued a statement condemning Widdowson’s tweets regarding unmarked residential school graves.

MRU administration told The Epoch Times it would not give details on Widdowson’s case except to confirm that she was no longer a faculty member.

“The university unequivocally supports academic debate and will always defend the rights of faculty related to academic freedom. However, academic freedom does not justify harassment or discrimination,” the statement reads.

Widdowson said she has support from the Society of Academic Freedom and Scholarship, where she is a board member, and from other academic “dissidents,” such as Jordan Peterson.

“I currently have three colleagues right now who are really fighting hard for my ability to continue to interact with colleagues at Mount Royal University,” she said. “There’s a larger number than that, of course, but many are understandably nervous about what the current climate is and are afraid to put their names on things.”

Widdowson, who has spent over 20 years studying and writing about indigenous issues and policies, has filed a grievance against her firing and said she is hoping for an open process at arbitration. She says others in her situation are usually silenced as the disciplinary process plays out.

“I knew cases at Mount Royal, just absolutely shocking cases, where I only found out about it after the fact because the person was told that they couldn’t talk about it. The strategy is to get you in this vulnerable position where you’re afraid and you don’t want to say anything because you don’t want to provoke any further retaliation. And then you’re reliant upon the union to defend you and the unions are now under serious threat as well,” she said.

“You can’t really rely very easily on your union doing a vigorous defence, especially if you’ve got an anti-woke position. They’ve been captured by a faction, so they really can’t represent people fairly anymore. They subscribe to this idea that people who are perceived as being the most oppressed should be able to have more influence than the people who are perceived as being oppressors.”

Widdowson has documented her story on a website called wokeacademy.info and says she will soon link the site to a fundraising page where people can donate to a legal campaign. She wants lawyers to double-check the union’s case on her behalf. She believes it is strong, in part due to wrongful procedures surrounding her dismissal.

“The discipline started off with suspension when you should really get a warning, but nothing like that happened,” she said.

“So everything was completely unfair. It didn’t have any consistency to it and it was not clear. Many things were withheld. Reports were redacted, so I couldn’t even see the legal reasoning that had been used to come to the conclusions, although these are all very, very serious procedural problems.”