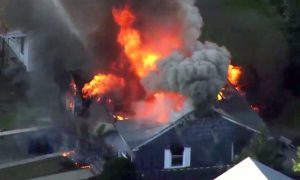 Firefighters were called in just after 5 a.m. to battle a blaze at the Ninho de Urubu training ground of the Flamengo soccer club in Rio de Janeiro’s western region, a fire official told The Associated Press.

There was no word yet on the cause of the fire.

The ages and identities of those killed were not released but the three injured were 14, 15 and 16 years old, the fire official said. The injured were taken to local hospitals and their conditions were not immediately known, said the official, who asked his name not be used due to his agency’s rules.

Local media reported that the fire started in a dorm where youth soccer players sleep. The fire official said that could not be confirmed.

Messages to Flamengo officials were not immediately answered.

Outside the complex, an Associated Press reporter saw two ambulances and a fire truck enter. The facility was closed, and no officials had come out to address media.

Family members, friends, and neighbors were gathering outside in hopes of getting information.

Jefferson Rodrigues, who runs a small inn near the club, said he had reached a 15-year-old player he had befriended.

“I am very happy. I just spoke to Caix Suarez and he is alive,” said Rodrigues, adding that the youth told him he ran when he saw the flames in the morning. “He lost his phone, and all of his things, but the important thing is he is alive.”

Joao Pedro da Cruz, a 16-year-old player in the Flamengo youth league, told G1 news portal that he decided not to stay the night at the facility Thursday because the team wasn’t going to train on Friday. Instead, he went to a friend’s house.

“The majority of the team stayed, my friends stayed (at the facility),” he said. “Today I woke up and heard this terrible news.”

Like many professional clubs in soccer-crazed Brazil, Flamengo has a youth development program for promising young players in their early teens. Many players, particularly those who live outside of Rio de Janeiro, stay at the facilities while training.

The dream of many youths in Latin America’s largest nation, winner of five World Cup titles, is to make it into the ranks of professional soccer. The development leagues identify promising players at a young age, working with them as they grow through their teenage years.

The best of those eventually play for Flamengo and several other teams across Brazil.

As news of the fire broke, several teams and players expressed their condolences on Twitter.

“We are extremely sad and shaken by the news of the fire,” tweeted Chapeco, a team in southern Brazil that lost 22 players in a plane crash in 2016.