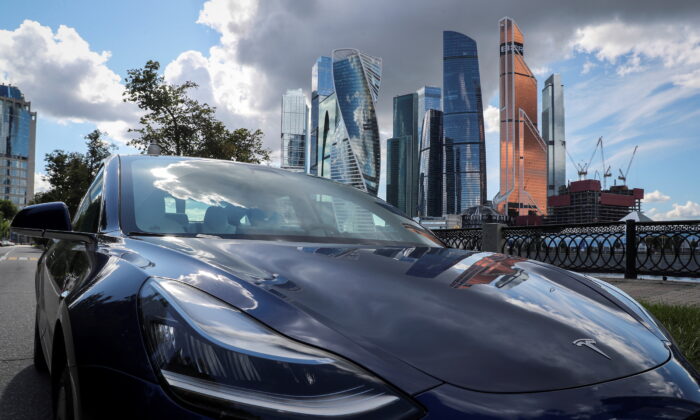 A Tesla Model 3 electric vehicle is shown in this picture illustration taken in Moscow, on July 23, 2020. (Evgenia Novozhenina/Reuters)
Companies

Finland Man Blows Up His Tesla After Claiming to Face $22,000 Replacement Battery Bill

A man in Finland has blown up his Tesla vehicle with 66 pounds of dynamite in defiance over the cost of a new battery after he claimed to face a $22,000 repair bill.

Tuomas Katainen, who lives in Jaala village in south Finland’s Kymenlaakso, exploded his 2012 Tesla Model S at a former quarry in a video uploaded to YouTube.

Tesla’s warranty covers battery replacements if the capacity drops below 70 percent within 150,000 miles or eight years of purchase, leaving some owners of the older models facing large repair bills.

The video, which is over eight minutes long, shows Katainen and a group of people loading the car with the dynamite before notably placing a dummy with Elon Musk’s face on it inside the car.

The vehicle then explodes into pieces amid a rather serene and picturesque scene of snowy mountains.

“When I bought that Tesla, the first 1,500 km were nice. It was an excellent car. Then error codes hit. So I ordered the tow truck to take my car in for a service. So the car was at a Tesla dealer’s workshop for about a month. Finally, I got a call that they cannot do anything for my car and that the only option is to change the whole battery cell,” Katainen said in the YouTube video.

He didn’t reveal the total miles the car has been driven or show proof of the would-be repair bill in the video.

The Epoch Times reached out to him for comment.

“The cost would be at least 20,000 € ($22,000), and permission to operation has to ask Tesla. So I told them that I’m coming to pick up the Tesla. Now I’m going to explode the whole car because apparently there is no guarantee or anything,” he added.

Tesla Chief Executive Officer Elon Musk—who has said he will pay more than $11 billion in taxes this year—is the world’s richest person with an estimated net worth of $244.2 billion, according to Forbes’ real-time billionaire’s list.

Battery issues are not the only problems Tesla vehicle users have encountered, as safety issues have also been raised over a number of the vehicle’s features, including its autonomous driving features.

While Musk didn’t specifically mention what the issues were, he noted that Tesla’s internal quality assurance had found problems with some left turns at traffic lights.

“Regression in some left turns at traffic lights found by internal QA in 10.3. Fix in work, probably releasing tomorrow,” Musk said at the time.

The Tesla CEO said this month that no other CEO on the planet cares as much about safety as he does and insisted that he had not misled Tesla’s customers about the company’s self-driving technology, including Autopilot and FSD, and any potential risks to their safety.