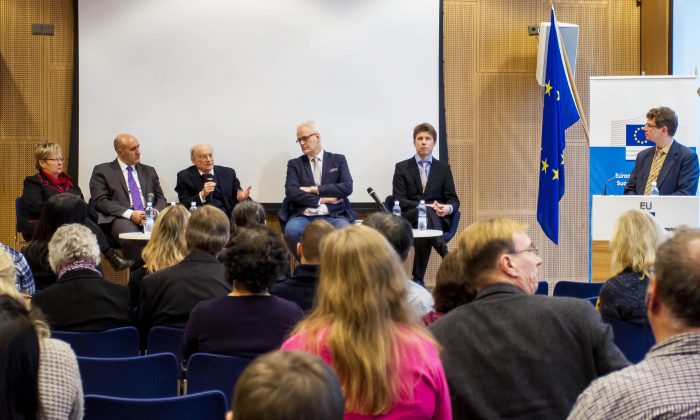 Finland Gets a Taste of Chinese Communist Political Struggle

The small Nordic country of Finland was recently treated to a peculiar piece of political theater: A Chinese woman was kicked out of its anti-immigration party for being too discriminatory.

This particular conflict had its genesis in an unassuming email sent by the organizer of a human rights forum. The topic? Organ harvesting in China. Specifically, the harvesting of organs of living practitioners of Falun Gong, a persecuted spiritual discipline, by the Chinese Communist Party’s military and security apparatus.

Belle Selene Xia, a deputy city councilor of Helsinki with the True Finns, a right-wing political group that tries to stay out of trouble, received the email. Xia happens to be a staunch supporter of the policies of the Chinese Communist Party. Some people in her position, occupying political office in a famously liberal country, might therefore ignore the email. But not Xia.

“A person whose aim is to destroy China and overthrow the Chinese government is a traitor and deserves the death penalty,” she responded in one of her emails. It was just one volley in a long email exchange with the forum organizer, Olli Torma, which eventually found its way into the hands of gleeful journalists and perturbed True Finns officials.

“I feel deeply ashamed of you and apologize to all the people who fall for your tricks,” she wrote in another.

Xia herself forwarded the exchange far and wide: to the Chinese embassy, dozens of Chinese students, and to the head of the European Parliament Information Office in Finland, who was providing the facility for the forum. Such a forum, which offended the Chinese nation, must be stopped, she demanded.

The Chinese embassy in Finland was on the case. They dispatched a diplomat to have a serious meeting with Pekka Nurminen, the European Parliament’s press officer, where the diplomat explained in no uncertain terms that the forum could not possibly proceed.

The Issue at Hand

Nurminen was apologetic, explaining that in Finland, forums on important topics cannot be cancelled because a foreign government demands it. The Chinese were offered the chance to come along and provide their own perspective at the end. They did not take Nurminen up on the offer.

The forum, at least, was as held as planned on Feb. 7 and got a robust turnout, informing attendees about organ harvesting from practitioners of Falun Gong in China beginning in around 2000. Two Finnish members of the European Parliament attended, and David Matas, one of the co-authors of the seminal reports on organ harvesting from Falun Gong, flew from Canada to speak there. Torma, a Master’s graduate in the study of religion at the University of Helsinki, gave a presentation on “The Preconditions to Illegal Organ Trade in China.”

Most of the illegal organ trading under discussion related to organs harvested from practitioners of Falun Gong, a traditional spiritual discipline. Falun Gong has been persecuted in China since 1999, but before then it was endorsed by the government and had attracted 70 million adherents, according to official figures. It includes five slow-motion exercises, and teaches living according to the principles of truthfulness, compassion, and forbearance.

The communist regime, under former leader Jiang Zemin, launched a brutal campaign against Falun Gong practitioners when he saw that the practice had become too popular. Soon, adherents locked up in labor camps became unwilling organ donors. Tens of thousands are suspected to have been executed so their livers and kidneys could be sold to rich Chinese and Western transplant tourists. The topic is heavily censored by the Chinese Communist Party.

The Helsingin Sanomat spent a number of columns calling her out.

The former China correspondent for the Sanomat, which weeks earlier had printed her flattering profile, now said Xia had “swallowed the Chinese government’s” propaganda on Falun Gong. “Fear and violence has been spread by the government that persecutes” Falun Gong, the reporter said.

For the True Finns, or Perussuomalaiset in Finnish, it was another public relations disaster. The party is the third-largest in the country, but due to its broadly right-wing and patriotic stance, happens to attract more than its share of people with idiosyncratic views.

Xia was a welcome addition as a public face for the party, because she is Chinese. She moved to Finland as a child and speaks the language fluently. Her presence undercut the idea that the True Finns were closed-minded racist anti-immigrants.

But her extremely prejudicial views on Falun Gong—and the constant excerpting in the papers that “traitors” must be killed—troubled them, to say the least. The True Finns has over the years already had a number of unwelcome scandals in the press, and this time were keen to quickly staunch the bleeding.

They held a meeting with Xia to discuss her emails and censure her for writing them, according to accounts that emerged in the Finnish press.

Xia was unapologetic, however. Her refusal to admit any wrong meant that the True Finns could only let her go, lest she do greater damage to the party’s image later.

Her expulsion from the True Finns again became another item of interest for the Finnish press. The Helsingin Sanomat said she was booted for “recurrent inappropriate behavior in public.”

“Her behavior was totally reckless,” said Nuutti Hyttinen, the party chair in Helsinki, according to the Sanomat. “We gave her several opportunities to correct her behavior, but she did not do that. We ended up having no choice.”

Upon getting wind of Xia’s virulent remarks, Finnish law enforcement officers also sought out Olli Torma and asked for a briefing on his encounter with her. They were concerned that there may be Chinese Communist Party-affiliated Chinese people in Finland who are working on the Party’s behalf to surveil or threaten Falun Gong practitioners in the country.

“I was aware that Xia thinks the Chinese political system is good, but I just wanted her to get the information about the seminar,” Torma said in a telephone interview. “I didn’t understand or realize that she would react so strongly.”

The entire episode was also an eye-opener for the Finnish public, he said. Interest in Falun Gong, previously little known in Finland, peaked, as it was mentioned in the major newspaper regularly for about a week.

“People got interested in knowing what Falun Gong is all about, and why she had such strong opinions,” he said.

Torma continued: “The other thing is that it made people think about how the Chinese agenda is being advanced in Western societies. There are ethnic Chinese or pro-Communist Party minded people who seek to land in responsible positions in society, and by acting within the country’s own political system, they seek to advance the Chinese agenda, which is anti-Falun Gong or anti-human rights. I think it made more people think about that.”