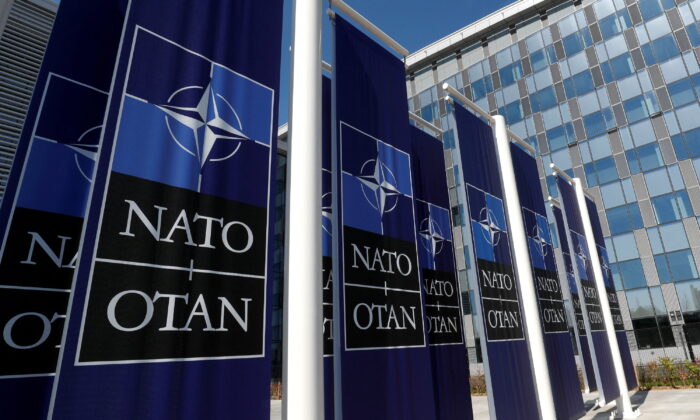 Banners displaying the NATO logo are placed at the entrance of new NATO headquarters during the move to the new building, in Brussels on April 19, 2018. (Yves Herman/Reuters)
By Caden Pearson

Finland and Sweden formally applied to join NATO on May 18 in Brussels, driven by the Russia–Ukraine conflict to step out of their neutrality maintained during and since the Cold War.

NATO Secretary-General Jens Stoltenberg said it was a “historic moment” and that he warmly welcomes the two nations into the world’s largest military alliance, a move considered to be one of the most significant adjustments to Europe’s security architecture in decades.

“You are our closest partners, and your membership in NATO will increase our shared security,” Stoltenberg said during a short ceremony in which the Swedish and Finnish ambassadors handed over their application letters in white folders embossed with their national flags.

NATO considers Finland’s and Sweden’s membership as beefing up its strength in the Baltic region.

Turkish President Recep Tayyip Erdogan isn’t convinced about the Finnish and Swedish membership, but Stoltenberg said on May 18 that they were “determined to work through all issues and reach rapid conclusions.”

Stoltenberg noted that their membership had strong support from all other allies.

The 30 member countries will now fast-track their applications in a process expected to take roughly 30 days, ABC reported. Final approval could take a matter of months, with the Russia–Ukraine conflict speeding up the usual 12-month process.

Canada is expected to ratify it in the coming days.

Finland and Sweden have long remained unaligned militarily with NATO, despite being strong partners. However, public opinion in the Nordic countries has tilted strongly since Russia invaded Ukraine.

Finland shares an 810-mile-long border with Russia. The New York Times reported that Finnish President Sauli Niinisto said the Russia–Ukraine conflict “changed everything” for the nation, which had previously believed “that nonalignment would give us stability.”

He said Finland could no longer afford to sit on the sidelines.

Russian President Vladimir Putin was unusually calm on May 16 when he responded to the imminent membership, saying that he has “no problem with these states” joining NATO, provided there’s no military threat to his nation, Reuters reported.

However, he told the leaders of the Collective Security Treaty Organization (CSTO), a Russia-dominated military alliance of former Soviet states, that any “expansion of military infrastructure into this territory would certainly provoke our response. … What that [response] will be—we will see what threats are created for us.”

Putin’s most recent response is in stark contrast to his previous comments against the expansion of the alliance. In fact, he has cited NATO’s eastward expansion as one of the main reasons for Russia’s invasion of Ukraine.