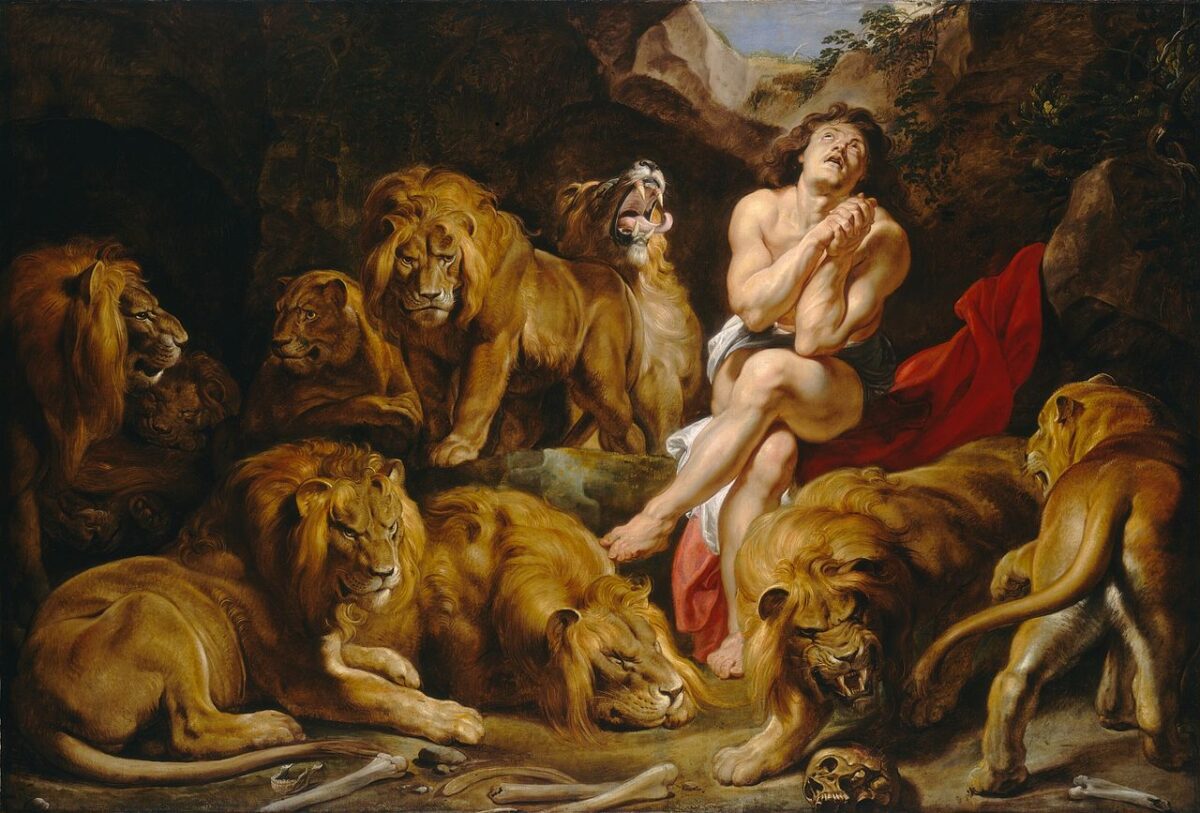 Finding Freedom in God’s Law: ‘Daniel in the Lions’ Den’

Reaching Within: What traditional art offers the heart
BY Eric Bess TIMEOctober 16, 2022 PRINT

Daniel was a devout Jew during the time of King Darius’s reign. Darius, the king of Persia around the sixth and fifth centuries B.C., was friendly toward the Jews and even played an important role in the rebuilding of the Temple in Jerusalem after the Babylonians destroyed it.

To discredit Daniel, the administrators came up with a manipulative scheme. They convinced King Darius to create a law stating that anyone who prayed to any unrecognized god would be thrown into a lions’ den. The law would be enacted for 30 days and could not be altered after it was created. King Darius agreed. The administrators knew they could harm Daniel only if they attacked his relationship with God.

Daniel heard about the new law, but he didn’t let it influence his actions at all. He continued to pray to God as he did before. The administrators went together to catch Daniel praying to God, and they reported to King Darius that Daniel had broken the new law. King Darius was distressed by this information, but there was nothing he could do to protect Daniel.

The administrators ordered Daniel into the lions’ den and mocked him before locking him inside.

King Darius worried about Daniel all night, and at the first light, he ran to see if Daniel was harmed. Darius found him unharmed. He explained to the king that God had sent angels to close the mouths of the lions because he was innocent according to the law of God.

King Darius rejoiced and freed Daniel. Then he threw the administrators who caused trouble into the den, instead. The lions devoured them.

‘Daniel in the Lions’ Den’ by Peter Paul Rubens

Peter Paul Rubens, considered one of the greatest painters in the Western canon of art history, painted during the Roman Catholic Church’s Counter-Reformation. This was a time when the Church, in its struggle against Protestantism, celebrated early Christian martyrs so as to arouse the faithful from spiritual slumber.

Rubens, a devout Catholic, played his own role in the Counter-Reformation. Painting “Daniel in the Lions’ Den” was one opportunity he took to inspire other Catholics by the spirit of the biblical martyrs.

Rubens painted Daniel as the lone human figure in the composition. He sits to the right, with his legs crossed and his hands clasped together in prayer. A subtle light shines from the left side of his head, and he looks up in awe at the den’s opening.

Nine lions surround Daniel, but they don’t seem interested in him. Some of the lions sleep, others rest, two seem to play, and one yawns. The least of their concerns seems to be Daniel, who, despite the human bones strewn around the den, is safe.

The Righteousness of God’s Law

On the surface, the story about Daniel and the lions’ den simply represents the power of faith in God. Daniel kept his faith in God despite being attacked by those in positions of power. His faith brought about a miracle, saving him from a gruesome death. But there might be other meanings in this story as well.

First, let’s begin by investigating two types of laws. The king is the most powerful and wealthiest person in the region. He has the power to create laws when he finds them agreeable and dismantle them when he finds them disagreeable.

Yet the administrators easily manipulated King Darius to create a new law with the sole purpose of hurting Daniel. The law, in fact, was founded on jealousy of the righteous, and built into this law was the decree that it was immutable. As a result, the king could not stop an innocent human being from being harmed. The law blocked the king from acting as a good person.

But there is another, higher law: the law of God.

Although the king’s law does not clearly appear in the painting, God’s law does. The truth of God’s law seems to be bound in compassion toward the righteous. Daniel’s faith was strong; it was so strong that the king’s law—a human law that attempted to obstruct the law of God—did not affect Daniel.

Instead of following a human law, Daniel chose to follow the law of God. God’s law was able to reach where the power and wealth of the king could not. And it kept Daniel—an exemplar of righteous character—safe.

The Master of Animalistic Desire

Let’s return to the painting to investigate a potential, second meaning.

The lions may represent our animalistic desires, that is, our desires of the flesh. These lions are like lurking temptations waiting to devour us the moment we are not steadfastly righteous.

By definition, prisoners are not free, and the lions’ den was where prisoners were sent to die. The bones strewn across the den’s floor relay to the painting’s viewers the fate of previous prisoners.

Daniel looks up and out of the lions’ den with awe. Has he kept his mind and heart on God and thus transcended the den that imprisons him? Does this mean that he is truly free despite being imprisoned?

The lions behave as if they aren’t even aware of Daniel. Does temptation dissipate in the presence of a heart and mind that reflect on God, and is this the true source of his freedom?

Interestingly, the king is not free to stop his law from being carried out, yet Daniel seems free despite being locked in a lions’ den. Sometimes, our human laws permit things that may not befit righteous behavior. Does this illusion of freedom—that is, the idea that we’re free when we give in to temptation simply because our laws allow it—obstruct us from being really free?

We can’t be moral without being free, for moral action implies our innate ability to choose between what we believe to be right and wrong. Are we, like King Darius, creating laws that prevent us from being good to our fellow human beings? Must we, like Daniel, master our animalistic desires with the law of God if we wish to experience true freedom?