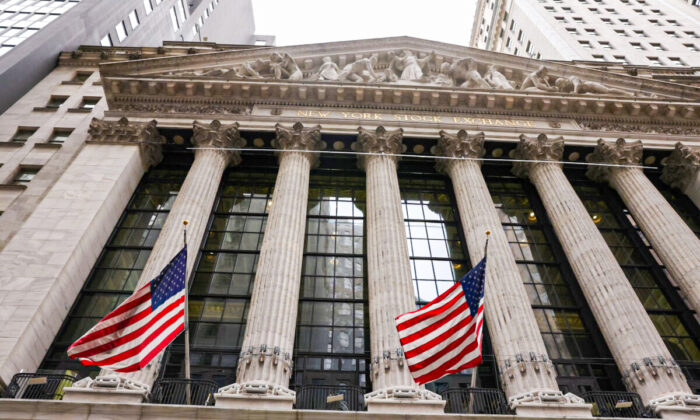 Flags are seen outside the New York Stock Exchange in New York City, where markets roiled after Russia continues to attack Ukraine, in New York, on Feb. 24, 2022. (Caitlin Ochs/Reuters)
Inflation

Earlier this month, Bank of America’s (BofA) monthly survey of fund managers found that optimism about the international economy has slumped to an all-time low.

Of the respondents, 71 percent were pessimistic about global growth in the coming months, as risks of a recession have turned into the top “tail risk” for global financial markets, the survey revealed.

Should the United States emulate the economy of the 1970s—a blend of stagnating economic growth and skyrocketing inflation—how will the financial markets respond to this type of environment?

Investment firms have been reallocating their portfolios, pouring into crude oil and other commodities, and placing long positions in resource and health care stocks, according to the bank’s poll.

With increasing stagflation risks, Goldman Sachs believes that passive investing may no longer be a successful approach for investors, meaning that the standard 60/40 portfolio—60 percent stocks and 40 percent bonds—might not be an effective strategy in a market of inflation, volatility, and uncertainty.

“I would say that the playbook for investments and portfolio construction of the period since the financial crisis may not be relevant anymore. We have entered a period of higher inflation, higher volatility, more uncertainty,” said Maria Vassalou, co-CIO of multi-asset solutions in the firm’s Asset Management Division, in the bank’s podcast “Exchanges.”

“There is a need to rethink how we construct portfolios. Passive investing will be less relevant going forward. I think there is a big case to be made for active investments. There is also a much bigger argument for dynamic asset allocation going forward.”

Although signs are forming that a recession could be on the horizon, the risks aren’t serious enough for investors to overhaul their portfolios, she said.

With inflation expected to remain persistent and stickier, investors might need to consider embracing a more dynamic inflation strategy, said Nancy Tengler, CEO and CIO of Laffer Tengler Investments. She said that such a portfolio would comprise real estate investment trusts (REITs), precious metals, energy commodities, and robotics. Another theme that traders need to home in on is dividends.

“Central banks around the world began hiking last spring. There have been over 100 hikes since that time and the global economy is slowing. The Fed has lagged this trend and now finds itself way behind the curve with a well-telegraphed hiking regime and tightening plan into a slowing economy,” Tengler wrote in a research note.

“We expect to see weakness in the coming quarters in the cyclical names. Investors will flock to reliable growers.”

Despite equities being resilient during the earnings season, there has been a transition to real assets, purports Mimi Duff, an investment strategist at GenTrust.

At the same time, Duff said in a recent research note that clean energy positions and taking advantage of decimated sectors could provide opportunities.

“We continue to like the clean energy theme: expect the world to reduce dependency on Russian oil, gas, and coal, diversifying supply, improving energy efficiency, and investing in renewables. We’ve recently added to positions we already held in clean energy and uranium,” Duff stated.

“We are carefully considering when allocations to other very beaten-up sectors (for instance, tech) so stay tuned there. We continue to monitor valuations.”

Economists project that the first-quarter GDP growth rate will be around 1 percent. The Federal Reserve Bank of Atlanta’s GDPNow model shows a 1.3 percent expansion in the January-to-March period, while the latest Conference Board forecasts anticipate the U.S. economy will slow to 1.5 percent.

If these projections are accurate, it would be significantly down from the previous quarter’s growth rate of 6.9 percent.

Is the world’s largest economy about to embark upon stagflation as the plethora of headwinds persist and intensify? For the last couple of months, this has been the concern with many economists and financial analysts discussing the possibility of a prolonged slowdown amid soaring price inflation, a global supply chain crisis, lower consumer spending, and the war in Eastern Europe.

Market strategists have been alluding to multiple signals, including soaring wholesale prices and a recent bearish small business report to spotlight a weaker economy.

Inflation topped labor quality as the most important issue to entrepreneurs in a survey by the National Federation of Independent Business (NFIB). The same poll discovered that nearly three-quarters (72 percent) of small-business owners raised prices, and another half of smaller companies plan to continue raising the costs of their goods and services.

Others point to the various monetary policy mistakes committed by the Federal Reserve, with many arguing that it is going to be challenging for the central bank to curb inflation while trying to achieve a “soft landing” for the post-pandemic economy.

“We have a huge inflation problem, and the Fed continues to drag their feet. Even though they acknowledge that it’s a big problem, they’re doing nothing about solving it,” Peter Schiff, president and CEO of Euro Pacific Capital, said on his “SchiffGold” podcast. “To the extent that the economy gets weaker, they’re going to try to expand the money supply even more aggressively to try to stimulate it, which is why we’re going to have more inflation during the next recession.”

Fed Chairman Jerome Powell stated during an International Monetary Fund (IMF) event last week that his goal is to accomplish a soft landing as he lowers inflationary pressures throughout the country.

But Diane Swonk, the chief economist at Grant Thornton, told Bloomberg that the best hope might be “a semi-hard landing.”

Peter Hooper, the global head of economic research for Deutsche Bank AG, thinks the central bank could avert disaster, as a growth recession is more likely to happen. This is when the economy expands more slowly than the long-term trend of 2 percent and unemployment edges higher, but a contraction is ultimately avoided.

U.S. financial markets suffered their worst single-session slide since 2020 on April 22 as the leading benchmark indexes declined by double digits. Energy commodities, the metals market, and cryptocurrencies also tumbled. The greenback, a traditional safe-haven asset in times of market chaos, maintained its strong start to 2022, with the U.S. Dollar Index (DXY) topping the 101.00 threshold to finish the trading week.

Overall, 44 percent of retail investors think the stock market is heading in a bearish direction, according to a weekly sentiment gauge from the American Association of Individual Investors (AAII).