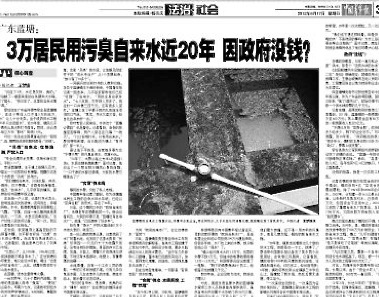 “Our tap water is so foul-smelling that I don’t dare drink it!” said a resident of Heyuan City’s Lantang section in Guangdong Province. “It’s been this way for years!”

Residents told The Epoch Times on June 18 that this has been the case for 20 years, and they suspect it is because of collusion between local officials and the water company. Adding insult to injury, they have been forced to pay for water from other areas with money from their own pockets.

The situation is so dire because no disinfectant is added to the water supply coming from the local reservoir. The water is revolting to residents because they often see algae and insects floating in the reservoir.

China Youth Daily previously reported that the problem is likely due to the influx of river water mixed with run-off from a trash dump into the reservoir.

The locals note that the reservoir is built into a hillside and is completely unprotected and unguarded, so the water is green, has scum floating on it, and the walls have thick moss on them.

When a resident turned on the tap, grayish water that gave off several distinct odors flowed out. Not only were pollution particles present in the water, but the resident said that worms are also often seen.

A staff member from the water department named Chen says that there is an agreement between the local government and a private contractor, which has been in effect for 30 years. The contractor maintains the equipment, while the government is supposed to be in charge of water quality. But the result of this “joint enterprise” is “filthy water and rotting pipes,” which leads one resident to wonder, “Since we don’t have clean drinking water, to whom should I send my bill?”

Instead of clean water, rumors are circulating in Lantang that the local government is pocketing their fees instead of purchasing disinfectant and that there is “something fishy” going on.

China Youth Daily also did some probing and found that several improvement projects had been planned but were never carried out, supposedly because of insufficient funds. The affected population is estimated at 65,000.

Local government did not answer a call from The Epoch Times.