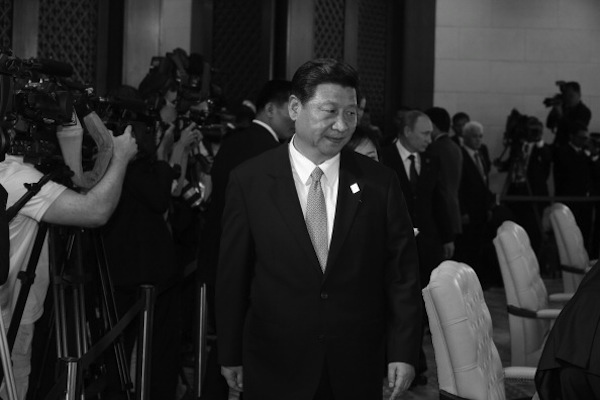 Mikhail Gorbachev is famous—or notorious—for ending the Soviet Communist Party by seeking to reform it. The dilemma faced by Gorbachev is much on the mind of Chinese Communist Party leader Xi Jinping, as witnessed by two rather contradictory statements he made at the Asia-Pacific Economic Cooperation last week.

The first was: “When calculating benefit, think of the benefit of the whole world.” The motto comes from Chiang Ching-kuo, the former dictator of Taiwan who effectively oversaw the country’s peaceful transition to democracy.

But if listeners were to imagine that Xi may be thinking of the same fate for the People’s Republic of China, his other remark seemed to snuff that idea.

“China will absolutely not make an error on the fundamental question that would undermine the regime,” Xi also said, on Oct. 7 at APEC in Indonesia. The “fundamental question,” of course, is the continuance of the untrammelled rule of the Chinese Communist Party (CCP).

His actions back in China showed that well enough: throughout the Party, central level department heads, provincial leaders, and grassroots Party cells were all grouped together and made to watch a documentary about the collapse of the Soviet Communist Party and reflect on the lessons for their own Party.

Titled Marking 20 Years of the Demise of the Party and the Country in the Soviet Union, the documentary series—4 episodes of 40 minutes each—sets out in somber terms how the Soviet regime collapsed, and how the CCP could avoid such a demise.

The film was produced by the Central Propaganda Department and leading communist theoreticians in January of 2012. According to the Yanzhou Metropolis Daily, the film is meant to be the best prophylactic against any Gorbachevian tendencies in the CCP.

It opens with an admonition about Mikhail Gorbachev, the leader of the Soviet Union whose perestroika, or reform, policies in the 1980s are widely attributed as leading to the regime’s downfall: “It must first be made clear that the word Gorbachev used for ‘reform’ actually means ‘recreate’ in Russian. The reforms pushed so assiduously by Gorbachev’s leadership clique and the reforms during the new period in our country are different in their essence.”

Elsewhere in the series Gorbachev is called “The traitor that destroyed the Soviet Communist Party!”

This is far from the first time that an initiative of this kind has been undertaken. David Shambaugh, a professor of Chinese politics at George Washington University, writes in his 2009 book China’s Communist Party: Atrophy and Adaptation that the demise of the Soviet Union, as well as the collapse of East European communist states, “left the Chinese leadership and the CCP profoundly shaken and worried about their own futures.”

It was “a profound and deeply disturbing shock,” he said, precipitating in the early 1990s systematic attempts at analyzing how it took place by scholars at the Central Party School, the CCP’s Organization Department, and other institutions. The earlier studies had taken a broader view of the causes for the Soviet Union’s collapse, rather than shrill warnings that merely focused on Gorbachev.

Observers of the Chinese political scene have since the beginning of this year been speculating about whether Xi Jinping is a closet reformer who is rolling out a set of neo-Maoist rhetoric in order to win over the hardliners in the Party, to free up his hands for the real task of reform; or whether, on the other hand, he is himself a genuine leftist.

Remarks like those he made in January of this year—that when the Soviet Communist Party was collapsing “nobody was man enough to stand up and resist”—could be read either way.

Whatever Xi’s motives, the trembling about a Soviet-style outcome show the Party’s fears, says Jason Ma, a commentator with NTD Television, a Chinese-language broadcaster based in New York. “The CCP’s ideology has collapsed. Inside the Party, even Party members question how long the Party will last,” he said on the Oct. 13 Focus Talk program.

About the recent Soviet collapse documentary, Ma remarked: “It’s replete with falsifications, and emotive, brainwashing-style content. During the Soviet Union, only its military and Olympic Games record were good, but the people were very poor. They had to line up at 5 a.m. to buy bread.”

The education sessions for Party members were accompanied by full coverage in the state press. Global Times, the nationalistic newspaper under the Party’s mouthpiece People’s Daily, ran an opinion article titled “Taking Heed of the Union’s Example Is the Most Basic Requirement for China.”

The thick communist language was unsettling to Chen Zhifei, a professor at the City University of New York, who also appeared on NTD’s Focus Talk program: “The direction Xi Jinping is going in is like North Korea. At least that way he’ll be able to enforce communist rule. But whether he can realize his ‘China Dream’ using the North Korean way to rule China is questionable. It’s obvious that North Korean peoples’ lives are not good.”