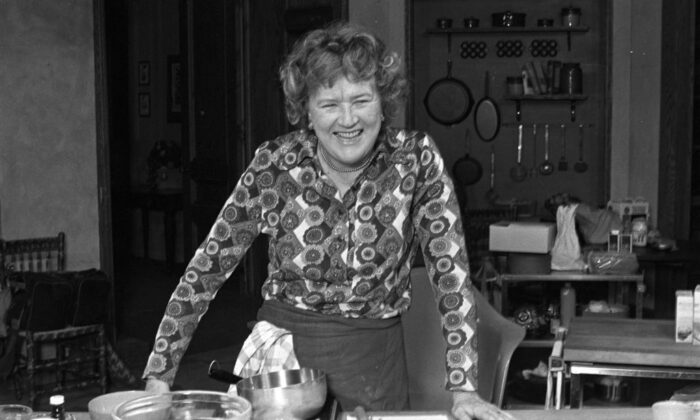 Although not the first non-fiction U.S. TV show about cooking (“Sunday Evening Supper” in 1940 preceded it), the PBS-produced “The French Chef” (1963–1973) was the first program of its kind to be hosted by a woman. She was Julia Child, and it would be safe to declare that she was the pioneer of an entire genre of programming that has yet to reach critical mass in terms of overall viewership and numbers of shows. There are multiple stations dedicated solely to cooking and all of them owe their very existence to her.

Age 50 at the time she began her TV career, Julia was as far from what is generally considered to be “camera ready.” At 6’ 2,” she was taller than most men, was lacking in traditional TV beauty, and enunciated with a garbled voice. Julia offset these considerable limitations with a self-deprecating sense of humor, everyman approachability, and an uncanny knack to make gourmet European cooking appear, if not easy to pull off, at least fun to try. For her, it wasn’t homework; it was a field trip.

Not long after the show began, Julia’s 1961 book “Mastering the Art of French Cooking, Volume One” (co-written by Simone Beck and Louisette Bertholle) became a perennial best-seller and has never been out of print. A 1970, follow-up (sans Bertholle) didn’t fare as well and three future volumes were scrapped. This minor setback mattered little. By the early ‘70s, Julia had become a major American gastronomical icon and one of, if not the, most successful hosts in PBS history.

While dedicating an appropriate amount of time to Julia’s television career, co-director/producers Betsy West and Julie Cohen (“RBG”) cover what came before and after with thorough detail and equally thoughtful attention and do so with remarkable efficiency and time management. A production which in lesser hands could have easily eclipsed the 120-minute mark or longer, runs just 95- and feels (almost) complete. This is a near-textbook example of get-it-done, (and pardon the pun) fat-free filmmaking.

Born in 1912 in Pasadena, California, Julia McWilliams was the oldest of three children. A multiple sport athlete in high school and at Smith College, she served in World War II as member of the Office of Strategic Services (OSS) and concocted a shark repellant which still in use today. It was during this time she met Paul Child and they married shortly after the end of the war.

When Paul was transferred to France (he too worked for the OSS), it was he who introduced Julia to both French cuisine and the European culture. She subsequently charmed her way into the prestigious Le Cordon Bleu cooking school and graduated in the early ’50s. So enamored were the Childs with France, that they relocated there where she eventually partnered with Beck and Bertholle.

Prior to the release of this film, little was known about Paul who broke against the stereotype of most “husbands of famous wives.” Paul and Julia met long before she achieved fame and remained married for 48 years until his death in 1994. Not intimidated or emasculated by her success and higher profile, he was a key figure in promoting her and chronicling her career via his photography (much of which was seen in his biography of Julia – “Appetite for Life”). He also meticulously managed her TV kitchen, insuring each pot, pan, blade, and utensil was in the same exact place for the taping of every show.

No Mention of ‘Julie & Julia’

Cohen and West made only two mistakes along the way, but they are significant and worth mentioning.

The first was not including any mention of the 2009 film “Julie & Julia.” Written and directed by Nora Ephron, it was adapted from Julia’s 2006 posthumous “My Life in France” and the 2005 eponymous blog-turned-book by Julie Powell. The timeline of events leading up to the production of the movie is crucial.

In the wake of the 2001 9/11 attacks, Powell felt the best way to cope with her stress was to cook every recipe in the two “Mastering” books over the space of one year. This made for big news in the cooking world and rather than be flattered by it, Julia (who passed in 2004) viewed Powell’s endeavor as a misguided publicity stunt (which it was). Given Julia’s initial disdain for Powell’s ongoing project (and not yet published book), it’s highly unlikely she would have given her blessing to a movie lending it even more credence. With Meryl Streep as Julia, Amy Adams as Julie, and Stanley Tucci as Paul, the movie fared well at the box office, pleased most critics, and won a few high profile industry awards (but no Oscars).

The filmmaker’s second misstep was revealing certain political positions Julia took in the autumn of her years, which likely will tarnish the memories of her amongst roughly 50 percent of the still dedicated fan base. Julia never discussed politics on her show and bringing it up here serves no useful purpose.

What is perhaps most impressive about Julia’s legacy was her constant experimentation and total lack of fear. Before her show started in earnest, she failed at making a basic egg omelet. Modern-day TV cooks (most of who aren’t even real “chefs”) need to familiarize themselves with Julia’s humility and realize it’s not about making the perfect dish. It’s about relating to the audience. No person before or since has done a better job of that more than Julia Child.