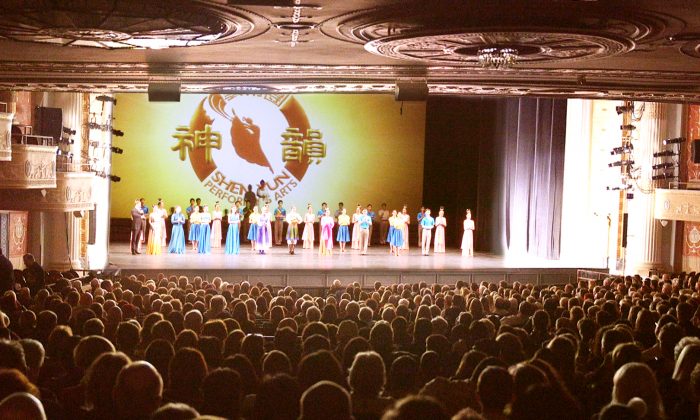 CLEVELAND—For film director and producer Lief Bristow, Shen Yun is a reminder that peace is possible in the world.

“When you watch a show like this, you’re reminded that there are very peaceful processes and beliefs that have existed for centuries,” he said.

Mr. Bristow has perhaps a unique perspective on the process of attaining peace when it would seem impossible. As a visitor in South Africa during the Truth and Reconciliation Commission—an attempt to reconcile, in some measure, the injustices perpetrated during Apartheid—he saw that “if we can find a way to find a belief in ourselves, a belief in each other, and a way to forgive and let go, then we actually can rise above all the adversities that’ve come before.”

It is part of New York-based Shen Performing Arts’s mission to show the time-honored, cherished belief in compassion, tolerance, and harmony between heaven and earth. The company travels the globe each year bringing audiences a glimpse of the grandeur, grace, and deeply profound values of ancient Chinese culture—mainly through the vehicle of classical Chinese dance and the stories of historic dynasties it depicts.

Mr. Bristow has seen the traditional Chinese music and dance company many times in the past 11 years, and drove from Toronto to the Cleveland State Theatre to see the performance on Feb. 5.

Over the years, he’s seen the company’s continued artistic growth.

“It was wonderful,” he said of this evening performance. “We’ve seen the show off and on since 2006, so seeing the progression of the show, I certainly thought this was the most spectacular of all of the different shows,” he said.

As a film director, working primarily in feature films, he thought the performance’s pacing was great, and that the technology now “has elevated the show to a whole different level.”

Shen Yun’s unique digitally animated backdrops not only complement the colors of the costumes, but they also interact with the dancers, to make the scenes come alive.

The timing of dancers who seem to fly off into the air as digital projections and then land again as dancers who take over the characterization “is so sophisticated, it rivals any good Broadway show. As a matter of fact, you don’t even see that level of sophistication in most Broadway shows,” he said.

According to Shen Yun’s website: “From vast open grasslands in one dance to the stately elegance of Tang Dynasty pavilions in another; from dusty yellow battlegrounds to tropical beaches to Himalayan peaks to picturesque scenery of the Yellow River Delta—the digital projection infinitely expands and transforms the stage.”

Mr. Bristow commends the team of visual artists for their giving the performance greater dimension and so beautifully blending with the dancing.

“The colors are magnificent,” Mr. Bristow went on.


The beauty and the diversity of the costumes is magnificent.

“I think [the backdrop] also goes with all of the color tapestry of the show. … It’s always been sort of a hallmark of that show. The beauty and the diversity of the costumes is magnificent.

“The color applications both against the visual work on the screen, together with how all those colors complement and each color really drives the performance in a different way. So visually for the audience, you’re captivated by the groups of colors and how they pop out off the stage.”

“When you look at it from a whole staged entity, everything from the staging, the lighting, the costumes, obviously, are spectacular—not many shows in the world you see with that level of costume and the technical work and performance skills …  it’s a pretty masterful show,” he said.

But behind, or better to say, beyond the surface beauty, Mr. Bristow sees spiritual depth:

“Consistently, year after year, the shows have always demonstrated both a level of spiritual tranquility, peace, and a belief in a higher power. And that has come certainly from ancient times in China as it did from ancient times from other cultures and civilizations. … The consistency of staying true to that foundation is really good—it’s uplifting,” he said.

Most audiences, he believes, attend the theater to enjoy themselves, to be uplifted or have a cathartic experience. Shen Yun fulfills this desire because what pervades is a sense of spirituality that transcends any one individual belief. It has a common core that reaches a place of peace and tolerance.


Whether it’s our own belief or someone else’s belief, to accept it and respect it, I think it would put a lot of tolerance in the world.

“And after thousands of years, if we pay attention to [processes to find peace] and accept them, whether it’s our own belief or someone else’s belief, to accept it and respect it, I think it would put a lot of tolerance in the world. It would be an awful lot better place than we are today.”

And Shen Yun is offering just that, he believes.