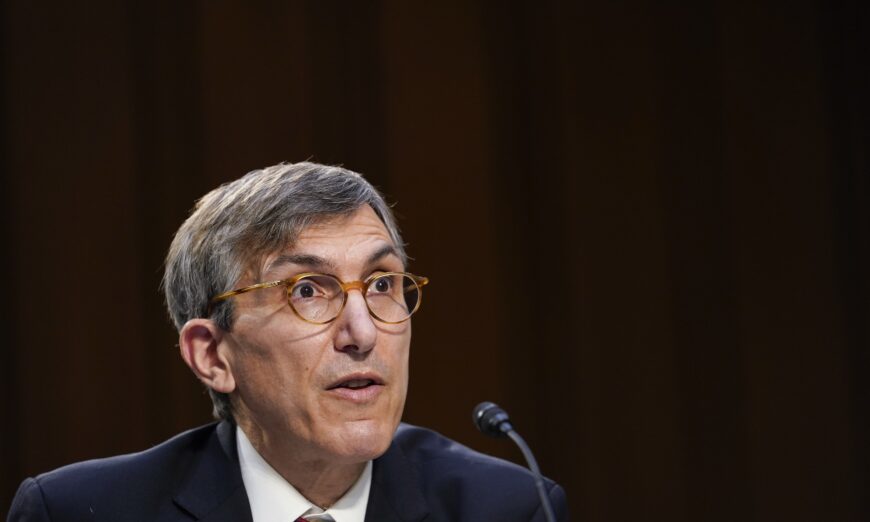 Dr. Peter Marks, director of the FDA’s Center for Biologics Evaluation and Research, speaks in Washington in a file image. (Susan Walsh/Pool/Getty Images)

Hours after the Food and Drug Administration (FDA) authorized a fourth shot of the Moderna and Pfizer COVID-19 vaccines for all Americans 50 and older, an FDA official said a fifth shot may be needed in the fall.

“I don’t want to shock anyone but there may be a need for people to get an additional booster in the fall, along with a more general booster campaign if that takes place, because we may need to shift over to a different variant coverage,” Dr. Peter Marks, head of the FDA center that regulates vaccines, told reporters on a call on March 29.

The fresh emergency use authorization is for a fourth shot for Americans 50 and up and a fifth shot for people as young as 12 with weakened immune systems. The boosters from Moderna and Pfizer target the strain of SARS-CoV-2, or the CCP (Chinese Communist Party) virus, that was circulating in early 2021. Multiple strains have since emerged and become dominant in the United States. Omicron is the latest.

“It may be that a decision is made that rather than what we currently have, the vaccines we currently have—which are called vaccines against the prototype virus—that we will move to a vaccine that is either against one of the variants—whether it’s Omicron, Beta, or Delta, or something else, I can’t say right now that’s for discussion—or whether it’s some mix of different ones,” Marks said. “But it’s possible that people will need to get another vaccine.”

The FDA authorized the outdated boosters because regulators felt doing so could save lives and because it will likely take several months to discern whether an Omicron-specific booster works, he added.

“And it’s not actually clear yet what the optimal booster should be,” Marks said.

The matter will be discussed during an April 6 meeting with the FDA’s expert advisory committee.

Some experts have raised concerns about repeatedly injecting people with COVID-19 vaccines. The worries stem in part from the main vaccines being built on a technology, messenger RNA, that had never been cleared for use before the pandemic, with others noting that other vaccines provide sufficient protection through shots administered annually, or at less frequent intervals.

If repeated boosters are administered, “we will end up potentially having problems with immune response and immune response may end up not being as good as we would like it to be, so we should be careful in not overloading the immune system with repeated immunization,” Marco Cavaleri, the European Medicines Agency’s (EMA) head of vaccines strategy, told a briefing in January.

Dr. Robert Malone, who helped invent the mRNA technology, said research he’s reviewed indicates the vaccines can lead to immune suppression, a condition where the body’s natural immune system is weakened against all kinds of infection and disease.

“This is the risk associated with this strategy of reboosting,” he told The Epoch Times.

Presented with Marks’ remarks, Malone said they were “pure speculation and unfounded.”

“That’s a forward looking statement. There’s no scientific basis for evaluating it. And it’s inappropriate for the FDA to be speculating like that, in my opinion,” he said.