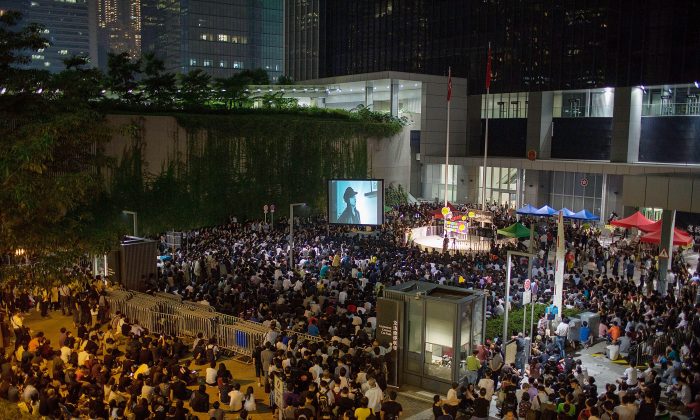 Thousands jam Civic Square in Hong Kong protesting the denial of a broadcast license to Hong Kong Television Network on Oct. 21, 2013 in Hong Kong. A government press release announcing the fencing off of this square referred to "recent public order events," which is believed to be a reference to protests like this one. (Lam Yik Fei/Getty Images)
China

HONG KONG—The Civic Square, the symbolic heart of the Central Government Offices (CGO), was designed to express the relation between the people of Hong Kong and their government. That space is now being walled off in a move critics say shows a government turning hostile to its own people.

The CGO complex was originally designed with an open-door concept, as explained by then-Chief Executive Donald Tsang Yam-kuen.

“The concept isn’t just an architectural feature, but also a reminder telling us to be liberal, open-minded and proactively solicit public opinion at all times,” Tsang said at the topping-out ceremony of the CGO complex in 2011.

The open-door is now going to be shut by a three-meter-high fence being built around the Civic Square.

The government’s Administration Office issued a press release on July 17 announcing that the East Wing Forecourt, the formal name of the Civic Square, would be closed from July 17 to the end of August. The fence would be erected as a security enhancement measure along Tim Mei Avenue and the boundary between the Civic Square and the Legislative Council (LegCo) complex.

“A review on the existing security arrangements for CGO has revealed that it is necessary to enhance the overall capacity of the CGO to withstand potential security threats to the building,” a government spokesman said in the release. “Besides, the recent public order events that took place at the LegCo Complex illustrate the need to have appropriate security measures.”

The Civic Square has been a popular location for protests since Leung Chun-ying became Hong Kong’s chief executive.

Large protests or sit-ins with more than 100 thousand people have been held there, including demonstrations against Leung’s promotion of the mainland’s school curriculum, which Hong Kong’s parents considered a form of brainwashing, and a campaign urging the government to grant a broadcasting license to Hong Kong Television Network.

Civic Party leader Leong Kah-kit said Leung’s decision to fence off the CGO “made him an enemy of the public” and “showed overconfidence in himself.”

“You don’t even let the public use this place to vent anger,” Leong said. “How will Hong Kong react? It is going to explode.”

“Do you really want people going on Queen’s Road Central and Des Voeus Road Central to block the street? This government is so irrational and lacking of vision,” he added.

Leong demanded that the Administration Office revoke the decision immediately and said he will look into the possibility of applying judicial review regarding the security enhancement measure.

The Hong Kong Federation of Students (HKFS) and the Civil Human Rights Front, which are planning large-scale civil disobedience activities to fight for universal suffrage, said the security measure has transformed the open-door CGO into a closed-door one, putting the government in opposition to the people.

HKFS External Affairs Secretary Chow Yong-kang believes the Leung government intends to force people to protest in the streets of Central or other places.

“With the Civic Square closed, one can feel that the government is becoming more and more closed-minded and doesn’t want to see people rally at the CGO entrance,” Chow said.

“The government has literally fenced itself off,” Law said. “This is very backward and shows a lack of self-confidence. You can see that the government wants to isolate itself from the public.”

Law worried that in the future, protesters will be confined to a narrow walkway beside the road with many vehicles passing. This dangerous situation will deprive the protesters of dignity and make protesting inconvenient, he said.

Law said the new restrictions resemble those in mainland China and show that Hong Kong society is changing.

“There is a lot of space in front of government buildings in mainland China, but it is all fenced up by different means. The situation here is getting close to that,” Law said.

Security will also be strengthened at the escalator entrance to the Civic Square and entrances through the perimeter fence, the release stated.

Law said the Civic Square has become the Civic Passage, symbolizing the compression of Hong Kong’s public space. He thinks LegCo should review the measure and not allow this kind of thing to happen again and again.

“This is not just a space problem or a location problem, but a changing degree of openness and tolerance,” Law said. “This is a very bad message to the Hong Kong public.”