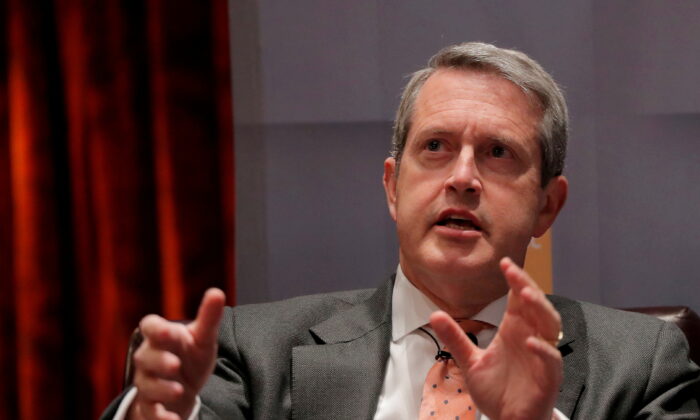 Federal Reserve Gov. Randal Quarles on Wednesday warned that additional government spending being contemplated by the Biden administration could lead to “transitory” inflation continuing for too long.

Speaking at a Milken Institute conference in Los Angeles, Quarles noted that the central bank has been increasing its holdings of Treasury securities and agency mortgage-backed securities by $120 billion a month since the middle of last year in an effort to support the economy.

Fed officials are reportedly preparing to start cutting back on monthly bond purchases as early as the middle of next month or mid-December, and will start withdrawing the extraordinary support unleashed after pandemic lockdowns paralyzed the economy, Bloomberg reported.

On Wednesday, Quarles said that he agrees with his colleagues at the central bank and other economists that “inflation likely will decline considerably next year from its currently very elevated rate,” noting that inflation has been worse and lasted longer than expected due to supply and distribution constraints bought on by the COVID-19 pandemic, and a demand for reopening the economy, as well as labor shortages.

Quarles acknowledged that inflation is currently running at more than twice the Federal Open Market Committee’s (FOMC’s)  longer-run goal, yet he said he was, “not quite ready to conclude that this ‘transitory’ period is already ‘too long.'”

Quarles said he would support a decision to move to reduce the pace of asset purchases soon, which would be “entirely consistent with the FOMC’s plan to pursue our longer-run maximum-employment and price-stability goals, and our new monetary policy strategy.”

“I think it is clear that we have met the test of substantial further progress toward both our employment and our inflation mandates, and I would support a decision at our November meeting to start reducing these purchases and complete that process by the middle of next year,” Quarles said.

“Bear in mind that asset purchases are pressing down on the accelerator, adding each month to the amount of accommodation the Fed is providing to the economy through downward pressure on longer-term interest rates.”

“Reducing purchases and ending them on this schedule is not monetary tightening, but a gradual reduction in the pace at which we are adding accommodation,” he continued.

However, Quarles noted that it is going to take longer than expected for supply to return to “normal” and said he is looking at “the extent to which it could be further boosted by the additional fiscal programs currently under discussion.”

“If those dynamics should lead this ‘transitory’ inflation to continue too long, it could affect the planning of households and businesses and unanchor their inflation expectations,” he said.

“This could spark a wage-price spiral that would not settle down even when the logistical bottlenecks and supply chain kinks have eased.”

Quarles said Federal officials need to be careful not to overreact to temporary disruptions, for example by raising interest rates “just as supply is increasing,” which could lead to inflation to fall too low or, in the worst case, result in an extended period of sluggish growth and unnecessarily low employment.

“The fundamental dilemma that we face at the Fed right now is this: Demand, augmented by unprecedented fiscal stimulus, has been outstripping a temporarily disrupted supply, leading to high inflation. But the fundamental productive capacity of our economy as it existed just before COVID—and, thus, the ability to satisfy that demand without inflation—remains largely as it was, and the factors that are disrupting it appear to be transitory,” he said.

“Looked at purely in that light, constraining demand now, to bring it into line with a transiently interrupted supply, would be premature. Given the lags with which monetary policy acts, we could easily find that demand is damping just as supply is increasing, leading us to undershoot our inflation target—and, in the worst case, we could depress the incentives for supply to return, leading to an extended period of sluggish activity and unnecessarily low employment,” he added.

Quarles did not provide an explicit forecast for the increasing of interest rates by the central bank.

During a question and answer session, Quarles said that “if we are still seeing 4 percent inflation or in that area next spring, then I think we might have to reassess the speed with which we would be thinking about raising interest rates.”