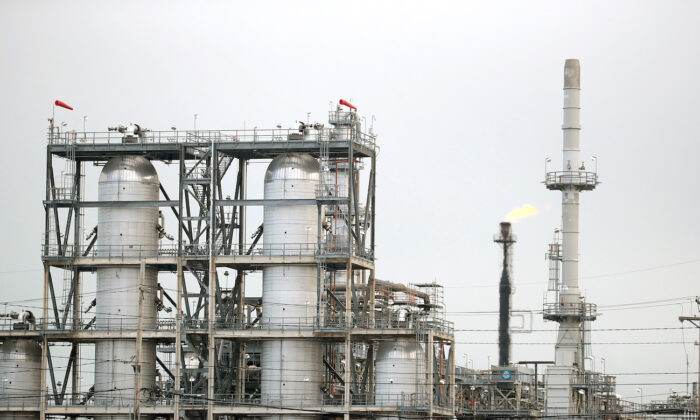 The federal government on Aug. 26 declared a regional emergency affecting Illinois, Indiana, Michigan, and Wisconsin, following an “unanticipated shutdown” of an oil refinery in Indiana due to a fire.

The fire on Aug. 24 knocked out the electrical power and cooling water systems at BP Whiting in Indiana, causing it to shut down and undergo assessment, Reuters previously reported.

The U.S. Department of Transportation and the Federal Motor Carrier Safety Administrations said the “unanticipated shutdown of the BP Whiting refinery” due to the fire has affected the supply of gasoline, diesel, and jet fuel throughout the four Midwest states.

The declaration provides the resources to immediately transport gasoline, diesel, and jet fuel to the four states, which are facing or are anticipated to face shortages. Illinois, Indiana, Michigan, and Wisconsin usually collectively receive up to 25 percent of their fuel from the BP Whiting refinery.

By executing the emergency declaration, motor carriers and drivers who are directly assisting the emergency in the affected states will be exempt from the federal regulation 49 CFR § 395.3 that limits property-carrying vehicles to a maximum driving time.

According to the American Automobile Association (AAA), drivers in the four states face average gas prices ranging from $3.62 in Wisconsin to $4.176 in Illinois as of Aug. 27.

Meanwhile, CBOB, a common grade of gasoline, went up 30.5 cents a gallon in the Chicago area on Aug. 25, a day after the oil refinery shutdown. Ultra-low sulfur diesel went up by 17 cents on the same day.

BP Whiting normally refines over 400,000 barrels of oil per day. It is the sixth-biggest by capacity in the United States, and the company’s largest in the nation, according the U.S. Energy Information Administration.

Michigan Democratic Gov. Gretchen Whitmer responded to the looming crisis by issuing an executive order that declares an energy emergency, which will last until the end of the emergency—defined as supply challenges related to the refinery fire—or until the end of Sept. 15, whichever comes first.

The move seeks to free up more gas supply and remove any hindrances to gas delivery to cut down wait times at stations, the governor said in a statement.

“I am taking action to help address Michigan’s fuel needs after a fire and power outage at a BP refinery in Indiana,” Whitmer said. “The impacts of the outage at the Whiting facility will be widespread across our region, and I am taking proactive steps to help Michiganders get the fuel they need to drive their cars and help businesses keep their products moving.”

The declaration of an energy emergency brings about two temporary actions in the state. The first will exempt fuel transporters from complying with the maximum weekly driving and on-duty limits. The second will “temporarily suspends certain laws and regulations to accelerate the transition to the fall fuel supply and takes advantage of existing stocks of fuel, contingent on the Environmental Protection Agency making similar changes.”