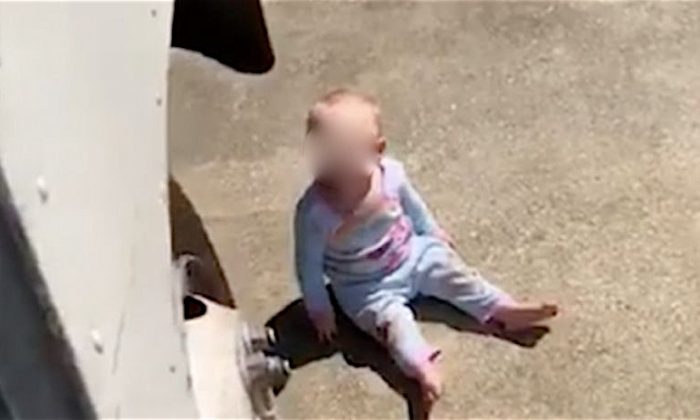 A FedEx delivery driver discovered an unsupervised baby that had crawled under his truck on Nov. 1. (Byron Nash via Storyful)
US News

FedEx Driver Finds Baby Crawling Under His Truck, Rescues Her

A FedEx delivery driver recently discovered an unsupervised baby that had crawled under his truck.

The footage, captured in Lake Charles, Louisiana, shows Byron Nash delivering a package to a property when he saw the baby near the wheel of his vehicle.

“This baby was crawling outside under my truck after my truck was parked to make a delivery, luckily I seen her before I backed out. No supervision in sight,” he wrote on Facebook last week.

He added: “This baby is right under my truck and her parents aren’t nowhere to be found! Look at this, this baby is outside by herself.”

The driver then picked up the child and walked up to the house. He first walked through the open garage and then yelled into a wide open door until a woman appeared.

“Hello! Hey! This baby was under my truck!” he says in the clip before the woman responds with: “I thought I had her trapped.”

The FedEx driver captured the exchange on camera.

Posted by Dearly on Thursday, 1 November 2018

Nash said the incident would have “scared him at first” and the woman tells him: “It would have scared the [expletive] out of me too. I would have been tripping.”

“Thank God I was paying attention because if I had backed up she would have been out of here,” Nash said.

She then told him that the house belongs to her mother, who has “everything open, all the doors, all the windows.”

No one realised she was missing 😡😡😡

Nash then advises the woman to use a playpen and also tells her to keep the doors closed in the future so as to prevent future mishaps.

Nash told the Daily Mail in a later interview: “I thought: ‘How could somebody leave their child unattended like this?’”

A woman named Ann Bartman commented on Nash’s Facebook video with a screenshot indicating that she had sent the video to the Lake Charles Police Department.

“We’ve received it numerous times and have forwarded it to the detective division,” replied the police department in the photo.

Amanda Riggan is a full-time driver with FedEx in South Carolina, who viral after making a stop she didn’t have to make.

Riggan was driving her FedEx truck on Jan. 3 when she met a woman who told her that her husband had cancer.

“I was like ‘How was your holidays?’ And with tears in her eyes, she said it wasn’t good,” Riggan said in a video she filmed and posted on Facebook after pulling to the side of the road. “She said, ‘He’s sick. My husband’s sick. He has cancer.’”

Riggan said she found the conversation awkward and changed the subject. She soon left.

“I drove off, my heart’s pounding. I do probably 20 more stops, and I have to go back,” Riggan said in the video. “I stopped what I was doing. I went back to that neighborhood. I rang her doorbell … and when she came down the stairs she had tears in eyes. When she saw it was me, she smiled.”

“She came out on the front porch and squeezed me so tight, this lady I’ve never met,” Riggan said, “and I prayed for her and her family, for her husband.”

Zachary Steiber contributed to this report