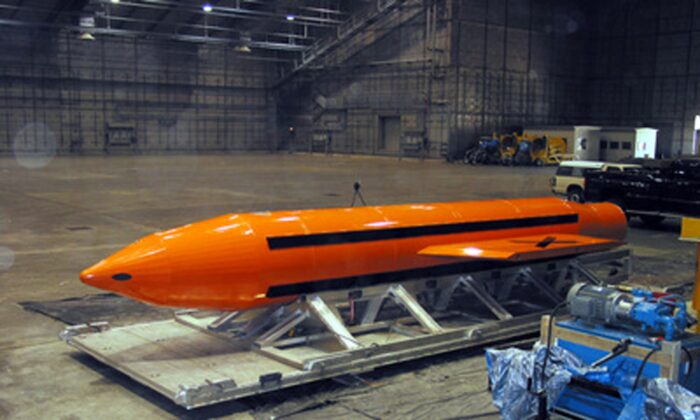 In this handout provided by the Department of Defense (DoD), a Massive Ordnance Air Blast (MOAB) weapon, a precision-guided munition weighing 21,500 pounds, at the Eglin Air Force Armament Center in Valparaiso, Fla. on March 11, 2003. (DoD via Getty Images)
By Bonner R. Cohen

The Trump administration’s ambitious goal of reestablishing U.S. preeminence in the extraction and refining of rare earth elements is being thwarted by two federal regulatory agencies and conflicting rulings by federal courts.

If the status quo is allowed to stand, it will help perpetuate China’s near-monopoly on 17 rare-earth minerals that are key components in an array of commercial and military devices.

These include computer screens, rechargeable batteries, and MRI scanning systems, as well as a host of military applications, including precision-guided weapons, communications equipment, high-strength magnets, and night-vision goggles.

After successive administrations had largely ignored the geopolitical implications of U.S. dependence on China for critical minerals, the Trump White House abruptly reversed course. In December 2017, President Donald Trump issued Executive Order 13817: “A Federal Strategy to Ensure Secure and Reliable Supplies of Critical Minerals.” It called on agencies across the federal government to develop a strategy to reduce the nation’s susceptibility to disruptions of critical mineral supplies.

This was followed up by the passage of the National Defense Authorization Act in December 2019, which, among other things, prohibited the Department of Defense and its contractors from acquiring certain sensitive materials from non-allied countries, including Iran, China, Russia, and North Korea.

That same month, Reuters reported that the U.S. Army had asked mining companies for proposals on the cost of a pilot plant to process so-called heavy rare earths, a highly sought-after type of minerals used in advanced weaponry.

Despite the Trump administration’s recognition of the strategic importance of rare earths, its efforts to create a reliable domestic supply of the crucial minerals are being undermined by bureaucrats deep within the Environmental Protection Agency (EPA) and the U.S. Army Corps of Engineers (Corps). These agencies share jurisdiction over the Clean Water Act (CWA), which, among other things, regulates the discharge of pollutants into the nation’s waterways.

The EPA’s and the Corps’ interpretation of that jurisdiction has brought them, along with state regulators in California, Oregon, Idaho, and Washington, into conflict with a promising source of U.S. rare earths, namely, deposits of sand or gravel in the beds of rivers and lakes in the West.

There, the most efficient, economical, and environmentally responsible method for recovering minerals from these underwater streambed sediments is through a technique known as small-scale suction dredge mining. The process involves passing water and sediment over a sluice tray, which separates out the sought-after heavier metals, and then discharging the remaining material back into the water.

Suction dredging is permitted under federal mining laws. But the practice has been stopped in its tracks in recent years, because regulators in California and Oregon refuse to issue the necessary permits. Washington state is expected to join those two soon, as its legislature has passed a bill prohibiting all forms of motorized mining in streams where Endangered Species Act-listed fish are present. This would effectively ban suction dredging in those streams.

These states can do this because EPA has delegated administration of a key section (402) of the Clean Water Act to the states. This has enabled state regulators to block suction dredging, saying the “mere movement” of pre-existing material in jurisdictional waters constitutes an “addition” of a pollutant under the CWA.

Determined to resolve a clear-cut disagreement among the courts about the reach of the term “addition,” a group of mining associations, county governments, and individuals have petitioned the U.S. Supreme Court to review a lower court decision allowing the Oregon Department of Environmental Quality (DEQ) to require in-stream miners to obtain an EPA Section 402 permit under the CWA.

In an amicus brief filed with the high court in February on behalf of the plaintiffs, Paul J. Beard II of the Los Angeles law firm of FisherBroyles LLP asked the justices to determine “whether an overzealous and atextual interpretation of the Clean Water Act will snuff out the work and passion of ‘modern-day forty-niners’…”

Beard added that suction dredging “adds nothing (let alone pollutants) to the water in which the activity is conducted, but has been deemed by the Oregon Supreme Court to be subject to the Clean Water Act’s prohibition against adding pollutants to jurisdictional waters.”

In a significant development, the Supreme Court in February ordered the Oregon DEQ to respond to the plaintiffs’ petition, a clear sign that the high court is taking the case seriously.

“The 402 program has morphed into and acts as a land-use prohibition in conflict with federal mining statutes, making mining claims worthless,” said Clark Pearson, a director of legal research at Public Lands for the People, a California-based nonprofit dedicated to preserving the rights of the public to access and use public land.

“These states have used the 402 program to prohibit the otherwise lawful practice of suction dredging, imposing draconian rules backed by dubious science, and the threat of fines that can reach $51,000 per day,” Pearson said.

There is nothing inherently wrong with EPA delegating some of its programs to state environmental agencies. But when states blatantly disregard the letter of the law, EPA should step in and tell state agencies that 402 permits aren’t required for suction dredging.

Had EPA preemptively notified the offending state agencies that their interpretation of the CWA was in violation of the law, their actions undermining the recovery of valuable minerals from streambeds could have been avoided.

EPA Administrator Andrew Wheeler has aggressively pursued reforms at the agency and may not be aware how those responsible are overseeing the 402 program.

The beneficiary of America’s regulatory morass is the government in Beijing, which has long recognized the strategic importance of rare earths and now controls more than 95 percent of these minerals’ supply chain.

Bonner R. Cohen
Bonner R. Cohen is a senior fellow at the National Center for Public Policy Research, where he concentrates on energy, natural resources, and international relations.