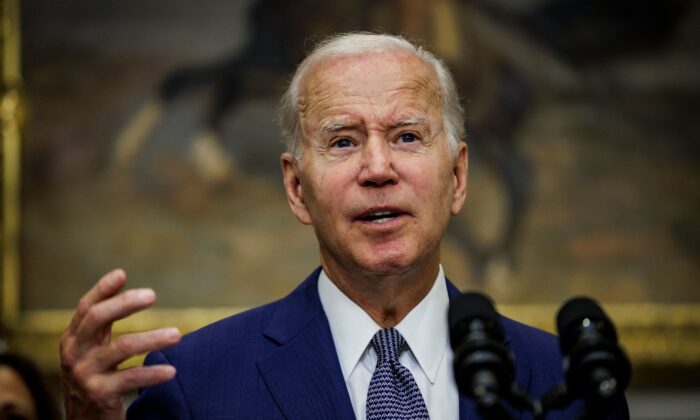 President Joe Biden speaks before signing an executive order aimed at ensuring access to abortion pills, at the White House in Washington on July 8, 2022. (Samuel Corum/AFP via Getty Images)
By Matthew Vadum

A federal judge ordered the Biden administration on July 12 to comply with information requests in a lawsuit brought by Missouri and Louisiana officials about alleged federal government collusion with social media companies to suppress important news stories in the name of fighting so-called misinformation.

The lawsuit could help bring to light the Biden administration’s behind-the-scenes efforts to discourage the dissemination of information related to the advent of the virus that causes the disease COVID-19 and the ongoing Hunter Biden laptop scandal, according to Eric Schmitt, Missouri’s Republican attorney general.

Supporters of former President Donald Trump claim that if the story about the laptop belonging to the president’s troubled son hadn’t been suppressed, President Joe Biden would have lost the 2020 presidential election. Republicans say the laptop provides evidence of the son’s misbehavior and of the Biden family’s corruption.

Facebook and Twitter infamously restricted the distribution of information related to the computer’s contents. Biden supporters claimed the story was manufactured by the Russian government as disinformation.

Social media also suppressed numerous stories related to the origins of COVID-19, possible medical treatments to prevent, treat, or cure the disease, and discussions about government and corporate policies implemented to deal with the virus, many of which curbed personal freedoms. Many government and corporate employees have been fired in the pandemic era for refusing to take government-approved vaccines, which they say have limited effectiveness and potentially severe side effects.

The lawsuit could also provide fodder for Republicans who promise multiple investigations into government wrongdoing should they retake Congress in the November elections.

According to court documents, the states allege that the administration “colluded with and/or coerced social media companies to suppress disfavored speakers, viewpoints, and content on social media platforms by labeling the content ‘disinformation,’ ‘misinformation,’ and ‘malinformation.’”

The states “allege the suppression of disfavored speakers, viewpoints, and contents constitutes government action and therefore violates Plaintiff States’ freedom of speech in violation of the First Amendment to the United States Constitution.”

When he filed court papers on June 14, Schmitt said, “The federal government’s alleged attempts to collude with social media companies to censor free speech should terrify Missourians and Americans alike.”

“We may have forced the Biden Administration to forego its Disinformation Governance Board, but there is still a very real threat to Missourians and Americans’ right to free speech.”

“Government can’t outsource its censorship to Big Tech,” Schmitt added in a tweet.

Schmitt celebrated the new court ruling in a series of Twitter posts.

“A federal court granted our request for discovery & documents from top ranking Biden officials & social media companies to get to the bottom of their collusion to suppress & censor free speech,” Schmitt said.

“No one has had the chance to look under the hood before—now we do.”

“In our lawsuit, we allege that top-ranking Biden Administration officials colluded with those social media companies to suppress speech about the Hunter Biden laptop story, the origins of COVID-19, the efficacy of masks, and election integrity.”

Judge Terry A. Doughty, a Trump appointee, granted the states’ motion for expedited preliminary injunction-related discovery. The request for an injunction itself will be ruled on at a later date.

Doughty noted in his order (pdf) that the states have asked the court to block the government “from taking steps to demand, urge, encourage, pressure, or otherwise induce any social-media company or platform to censor, suppress, remove, de-platform, suspend, shadow-ban, de-boost, restrict access to content, or take any other adverse action against any speaker, content, or viewpoint expressed on social media.”

U.S. Department of Justice officials didn’t respond by press time to a request by The Epoch Times for comment.

The case, Missouri v. Biden, court file 3:22-CV-01213, is pending before the U.S. District Court for the Western District of Louisiana.