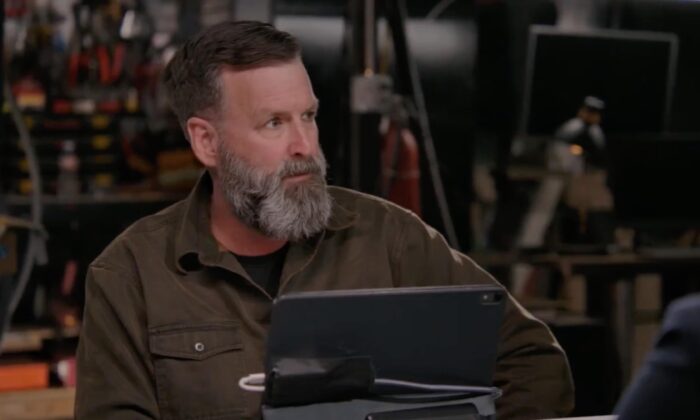 Gregg Phillips, whose investigation into voter fraud is featured in "2000 Mules.” (Salem Media Group/Screenshot via The Epoch Times)
By Juliette Fairley

Juliette Fairley
Freelance reporter
Juliette Fairley is a freelance reporter for The Epoch Times and a graduate of Columbia University’s Graduate School of Journalism. Born in Chateauroux, France, and raised outside of Lackland Air Force Base in Texas, Juliette is a well-adjusted military brat. She has written for many publications across the country. Send Juliette story ideas at JulietteFairley@gmail.com
View profile
biggersmaller
Print

A federal judge has temporarily restrained a Texas organization involved in the documentary “2000 Mules” from accessing any more of Konnech computers and ordered it to provide information on how it was able to tap into the company’s network.

“The Temporary Restraining Order [TRO] is in the public interest because it is in the public’s interest to enjoin conduct that the United States Congress has found to be unlawful, to prevent the disclosure of personal identifying and banking information, and the TRO would, in fact, benefit the public’s expectation of integrity in the U.S. election process,” U.S. District Judge Kenneth Hoyt wrote in his Sept. 12 order.

Konnech sued True the Vote in the Houston Division of the Southern District of Texas on the same day the TRO was issued, alleging that True the Vote president Catherine Engelbrecht and board member Gregg Phillips violated the federal Computer Fraud and Abuse Act while defaming Yu.

“Defendants are in business to capitalize [on] their claim that the 2020 presidential election was ‘stolen,'” wrote Yu’s attorney Constantine Pamphilis in the complaint. “Defendants most recently capitalized on their claims of election fraud through their involvement in the production of a so-called ‘documentary’ titled ‘2000 Mules’.”

TTV did not immediately respond to requests for comment.

“2000 Mules” claims that significant fraud occurred in the 2020 presidential election. Conservative commentator Dinesh D’Souza, who directed the documentary, is not named as a defendant in the lawsuit.

The complaint further alleges that TTV intentionally, repeatedly, and relentlessly attacked Yu with a unique brand of racism and xenophobia with accusations that Yu and Konnech employees are Chinese operatives.

“The truth is that Konnech is a U.S. company founded and operated by a U.S. citizen who has no affiliation with the Chinese Communist Party whatsoever,” Pamphilis stated.

All of Konnech’s customer data is allegedly secured and stored on protected computers located within the United States.

However, Judge Hoyt wrote in his order that TTV was able to gain unauthorized access to and gain information from Konnech’s protected computers.

“This order is issued ex-parte, and no notice was required to be given to defendants or their counsel as there is a risk that defendants would publicly release the information stolen from Konnech, or otherwise destroy the evidence establishing their misconduct,” Hoyt stated.

Juliette Fairley
Freelance reporter
Juliette Fairley is a freelance reporter for The Epoch Times and a graduate of Columbia University’s Graduate School of Journalism. Born in Chateauroux, France, and raised outside of Lackland Air Force Base in Texas, Juliette is a well-adjusted military brat. She has written for many publications across the country. Send Juliette story ideas at JulietteFairley@gmail.com