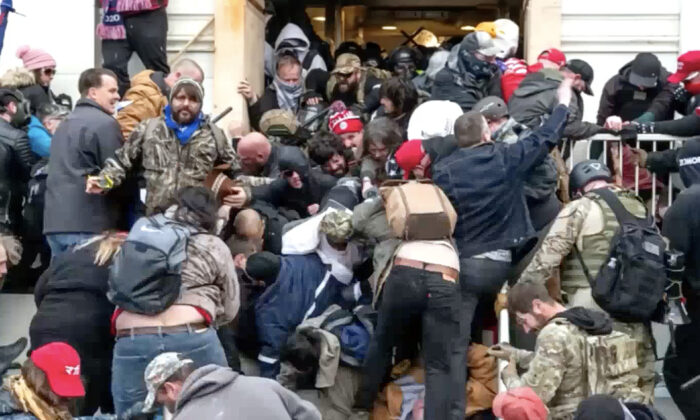 Protesters spill out of the West Terrace tunnel like a waterfall on Jan. 6, 2021. The crowd started to stampede out of the tunnel after police deployed gas on the crowd, witnesses said. (Video Still/Gary McBride)
By Joseph M. Hanneman

A federal judge has thrown out a felony obstruction charge leveled against a Jan. 6 defendant, saying the man’s alleged conduct doesn’t fall under the statute used by prosecutors in dozens of cases related to the 2021 breach of the U.S. Capitol.

U.S. District Judge Carl J. Nichols dismissed one of the 12 counts against defendant Garret A. Miller, 35, of Richardson, Texas.

In a 29-page ruling (pdf) on March 7, Nichols, a Trump nominee, wrote that the federal indictment of Miller doesn’t allege the kind of conduct covered by 18 § U.S.C. 1512(c)(2), which relates to the destruction of records or documents—not the attempt to prevent the counting of presidential electors by Congress.

“Nothing in Count Three (or the Indictment more generally) alleges, let alone implies, that Miller took some action with respect to a document, record, or other object in order to corruptly obstruct, impede or influence Congress’s certification of the electoral vote,” Nichols wrote, granting Miller’s motion to dismiss the charge.

The subsection of 18 § U.S.C. used widely by prosecutors against Jan. 6 defendants was approved by Congress as part of the Sarbanes–Oxley Act of 2002, to close a loophole in the law that was discovered in the wake of the Enron corporate fraud and accounting scandal.

Nichols wrote that the subsection was intended by Congress to have a narrow, limited focus related to the destruction of documents. It’s part of a section of the U.S. Code titled “Tampering with a witness, victim, or an informant.”

Even though the wording could be interpreted in various ways, in such a situation, “the Court must ‘exercise restraint in assessing the reach of a federal criminal statute,’” Nichols wrote, citing United States v. Aguilar.

Miller also stated in a social media post, “It was not a coup. We where [sic] gentle with police. We where unharmed. We overwhelmed them but did not injure them.”

If upheld on appeal, Nichols’s ruling could affect many other Jan. 6 cases that use the same section of the U.S. Code to charge defendants with obstruction of Congress’s certification of Electoral College votes. Prosecutors have charged that rioting at the U.S. Capitol obstructed Congress because the counting of the electors was delayed some six hours by the violence.

“The attorneys have been having good, active discussion about it all day,” said attorney Jonathon Moseley, who represents Oath Keepers member Kelly Meggs in his Jan. 6 case. “We think it is a very big deal.”

Moseley said a number of other judges in the D.C. Circuit have denied challenges and allowed the felony obstruction charge to stand. The divergence of opinions among the judges could increase the likelihood of an appeal to the U.S. Court of Appeals for the D.C. Circuit, he said.

“One of the issues in interpreting statutes is, should you look at the history, or just go by the plain language? Here, obviously, he’s done a deep dive into the purposes of the statute. So there are decisions going in different directions, sometimes for different reasons,” Moseley said.

District Judge Amit R. Mehta ruled in December that the 1512 section of the statute “is neither void for vagueness nor vague as applied to these defendants” in the case United States v. Thomas E. Caldwell et al.

Judge Dabney L. Friedrich rejected the challenge in United States v. Ronald L. Sandlin and Nathaniel DeGrave that the statute was designed for evidence tampering. Friedrich wrote that she doesn’t believe the law “should be construed so narrowly.”

Prosecutors have tried to stretch the law “beyond its plain meaning and beyond the intent of Congress when it enacted it,” Miller’s motion said.

Obstruction of an official proceeding was the one felony count charged against defendant Matthew L. Perna of Sharon, Pennsylvania, who took his own life on Feb. 25 when he learned prosecutors planned to seek sentence enhancers to request 41 to 51 months in prison.

Perna pleaded guilty to three misdemeanors and one felony charge as part of a plea deal, in hopes of putting Jan. 6 behind him, relatives said. Perna wasn’t charged with any violent actions, vandalism, or scuffling with police during his 20 minutes inside the Capitol. The potential prison time—driven by the felony charge—is a large part of what led to his suicide, relatives said.

Moseley said prosecutors’ use of this particular statute for Jan. 6 cases is “definitely novel.”

“It’s not only novel, but it’s opening Pandora’s box,” Moseley said. “People are warned, ‘Well, what happens when we have a Republican attorney general?’ It’s both novel and extremely dangerous in terms of unintended consequences.”