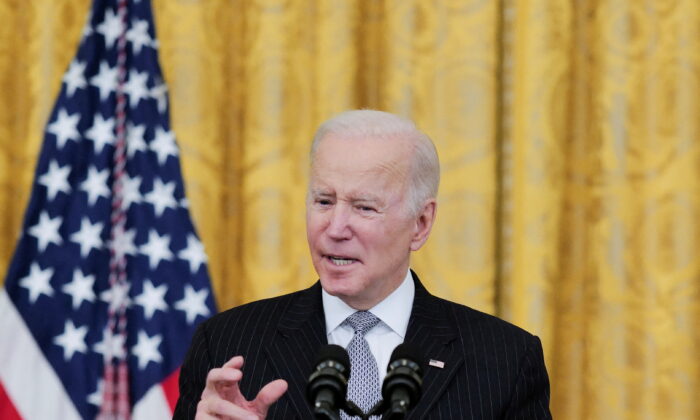 President Joe Biden speaks at an event at the White House on Feb. 2, 2022. (Cheriss May/Reuters)
Judiciary

A federal judge on Feb. 11 blocked a key climate initiative that was signed by President Joe Biden on his first day in office last year.

“The Court agrees that the public interest and balance of equities weigh heavily in favor of granting a preliminary injunction,” Cain wrote in an order (pdf) as he issued a temporary injunction.

Cain, an appointee of President Donald Trump, sided with states in their lawsuit against the federal government and agreed that “the harms to their States and their citizens’ economic well-being more than suffice to establish standing and the possibility of irreparable harm.”

Biden’s order, the judge added, “will harm Plaintiff States’ ability to purchase affordable energy to carry out their sovereign functions” as the mandate will “significantly drive up costs while simultaneously significantly decrease States revenues resulting in the inability of the Plaintiff States to carry out their sovereign duties to their citizens.”

In January 2021, Biden signed an executive order that claimed there is a “social cost” to carbon, nitrous oxide, and methane emissions—further asserting there is an estimated dollar value incurred by the United States for every additional metric ton of gases that is emitted (pdf).

Louisiana, Texas, Florida, and several other Republican-led states filed a lawsuit to block the Biden order, saying the White House is pursuing a “self-defeating green agenda.” They also described the policy as another attempt at federal overreach.

“Biden’s attempt to control the activities of the American people and the activities of every business from Main Street to Wall Street has been halted today,” Republican Louisiana Attorney General Jeff Landry said in a statement on Feb. 12 following Cain’s ruling. “Biden’s executive order was an attempt by the government to take over and tax the people based on winners and losers chosen by the government.”

Landry argued that with Biden’s rule intact, “agriculture, energy, and virtually every other manufacturing industry is at stake,” noting that a judge recognized that the federal government “does not have this reach.”

Since taking office, Biden has signed a number of climate-related policies, including scrapping construction of the U.S.–Canada Keystone XL Pipeline, rescinding leases for an oil project in Alaska, and shutting down other pipelines.

Republicans have said such policies reduce the country’s energy independence and lead to higher prices for heating fuel, gasoline, and other products.