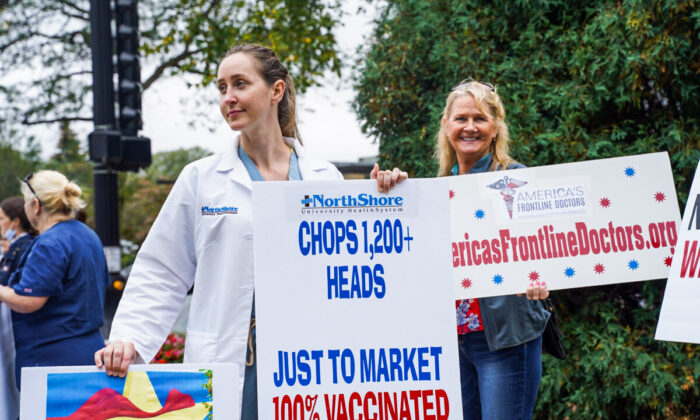 A federal judge temporarily blocked an Illinois hospital system from allegedly putting workers with religious exemptions to getting the COVID-19 vaccine on unpaid leave.

In late October, several employees at the Chicago-area NorthShore University HealthSystem filed a legal complaint against the company, arguing that the firm’s vaccine mandate discriminated against them by forcing them to decide between a vaccine and their jobs.

Liberty Counsel, which is representing the 14 health care workers, said in an emailed statement last week that the “plaintiffs have shared these religious beliefs, and others, with NorthShore, and have asked NorthShore for exemption and reasonable accommodation for these beliefs, but NorthShore has unlawfully and callously refused.”

“They can’t be fired, and they can’t be placed on what is effectively, in my mind, unpaid leave,” Kness said during a hearing on the lawsuit, the Chicago Tribune reported.

NorthShore is “going to have to keep paying them. If you wish to require them to show up to work and use [personal protective equipment] and go through testing because you need the help and you don’t want to pay them to be off-site, that’s up to the hospital,” he said.

Federal Equal Employment Opportunity Commission guidelines say that employees may ask to be exempted from vaccine requirements due to religious or medical reasons. However, workplaces don’t necessarily have to grant the exemptions under certain circumstances, the agency’s guidance adds.

Horatio Mihet, a lawyer representing the plaintiffs, told the Chicago Tribune that unvaccinated workers can still work there while wearing personal protective equipment and getting weekly testing.

NorthShore previously told The Epoch Times that it understands “that getting vaccinated may be a difficult decision for some of our team members” and values “their committed service and respect[s] their beliefs.” On Nov. 1, NorthShore didn’t immediately respond to a request for comment.

“We must prioritize the safety of our patients and team members in support of our broader mission,” the hospital system said.

NorthShore, in a statement to local media last week, disputed several claims in the lawsuit and had “considered each request based on multiple criteria” for exemptions.