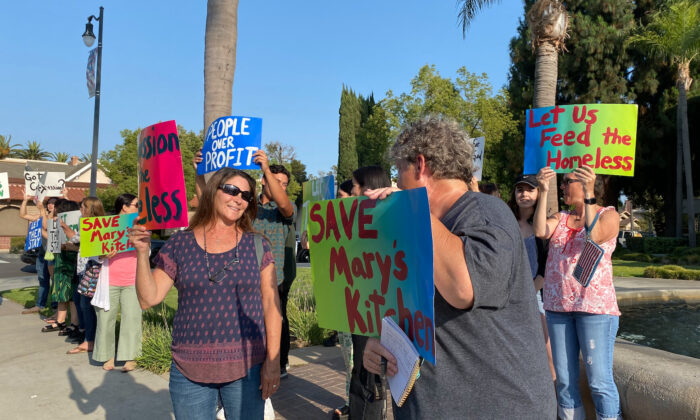 Community members protest the city of Orange's decision to shut down Mary's Kitchen, a soup kitchen for the homeless, in Orange, Calif., on July 13, 2021. (Chris Karr/The Epoch Times)
Southern California

SANTA ANA, Calif.—A hearing on a request for an injunction to block Orange from shutting down the Mary’s Kitchen homeless services provider is scheduled for Sept. 30 in a Santa Ana federal courtroom.

U.S. District Judge David O. Carter approved a request for a temporary restraining order on Sept. 17, noting that Mary’s Kitchen is the “sole homeless service provider for adults without minor children” in Orange and has operated in the city for nearly 36 years, starting in 1986.

Mary’s Kitchen’s agreement with the city to use its property started in 1993 and has been renewed several times over the years, Carter said in his ruling.

“The number of patrons served has grown from approximately 65 per day in 2004 to approximately 200 per day in 2019,” Carter wrote. “The city has celebrated the work of Mary’s Kitchen on its website, as has the county of Orange in reports submitted to the U.S. Dept. of Housing and Urban Development to receive federal funding.”

The city extended its license agreement with Mary’s Kitchen for another five years in June 2019. Carter said the extension was done because officials concluded the nonprofit was “well organized and efficiently run.”

According to Carter, city officials also noted in the license agreement extension that Mary’s Kitchen’s volunteers were “very dedicated” and that the facility is “impressively neat and clean.”

The patrons were also “for the most part behaved and orderly,” officials said, according to Carter. At that time, city officials noted that loitering continued to pose a challenge, but that Mary’s Kitchen officials worked closely with police, and surveillance security cameras were installed.

The COVID-19 pandemic shut down much of the facility’s interior space and cut down the services to food, mail pick-up, and bathroom usage, Carter said.

“During this time, the city experienced record rates of death in its homeless population,” he wrote.

The city sent a notice of violation of the agreement with Mary’s Kitchen in September 2020. The notice alleged violations such as “lodging on private property, causing traffic congestion, damage to city property, trespassing, and drug and alcohol use.” The notice also alleged loitering through the night and officials requested the hiring of private security.

Mary’s Kitchen reopened in December during the height of the coronavirus pandemic’s winter surge, which was overloading hospitals and fueling mounting deaths. A private security firm was hired then and from January through June, 80 arrests were made near Mary’s Kitchen for violations such as public drinking, trespassing, drug possession, and outstanding warrants, according to Carter.

Mary’s Kitchen officials asked the city in April to expand its services to become a “navigation center,” which would allow it to assist in finding permanent shelter for local transients, Carter said. The city didn’t respond, and instead the city manager on June 18 terminated the lease.

City officials said then that Mary’s Kitchen “only serves to enable homelessness and can no longer be supported by the city.”

An approved affordable housing project next door made Mary’s Kitchen “incompatible,” according to the city. Mary’s Kitchen was scheduled to get out of the space by Sept. 18.

Carter ruled that the city denied due process for Mary’s Kitchen. He also noted that Mary’s Kitchen over the years “has invested substantial resources in its current location over several decades, including physical infrastructure that cannot be moved.”

Eviction would cause Mary’s Kitchen to lose its location and “tens of thousands of dollars of infrastructure investments,” Carter said.

The transients who rely on Mary’s Kitchen would also lose valuable services, and “these dangers are compounded as the COVID-19 pandemic continues,” Carter said.

Carter rejected the city’s argument that it provides similar and enhanced services and said he “is not certain that said resources currently exist and would in fact offset the harm that would arise from closing Mary’s Kitchen.”

City officials argued that other shelters in northern Orange County in nearby cities are sufficient to meet the need. But Carter said Mary’s Kitchen clients are regularly transported from those shelters to Orange to receive services not provided at those other shelters.

The city argued that it has 160 beds available with a future project to build 64 new housing units, but Mary’s Kitchen serves about 300 clients in its location at 517 W. Struck Ave., Carter noted.

The damage to Mary’s Kitchen by shutting it down would be “substantial and irreparable,” but the harm to the city would be “minor,” Carter said. Shutting it down “would further strain already-burdened city services by spreading unhoused individuals throughout the city and county, making delivery of targeted services more challenging.”

Paul Sitkoff, a city spokesman, said on Sept. 15 that an attorney for the city has “reviewed the filing and believes it to be without merit.”

On Sept. 17, Sitkoff said the city would “comply with the TRO, and is working on a response. That response is still in development.”

The attorneys representing Mary’s Kitchen were the same ones involved in the lawsuit to clear the riverbed in Anaheim that led to a major settlement in the county allowing for cities to clear out homeless encampments while providing shelter for transients.

The services Mary’s Kitchen provides include meals, an address for transients to have benefits mailed to them, a place to clean up and use the bathroom, charging stations for electronic devices, clothes and laundry, and medical appointments.

After the city issued a notice to vacate the property, officials offered services to the homeless “for the first time” last month, the attorneys for Mary’s Kitchen said.

“That occurred only once in the last month and appeared to be more hype for the media than help for the guests of Mary’s Kitchen,” the attorneys said in the court papers. They also said there was no one available to help enroll the participants in the state’s program to provide shelter.