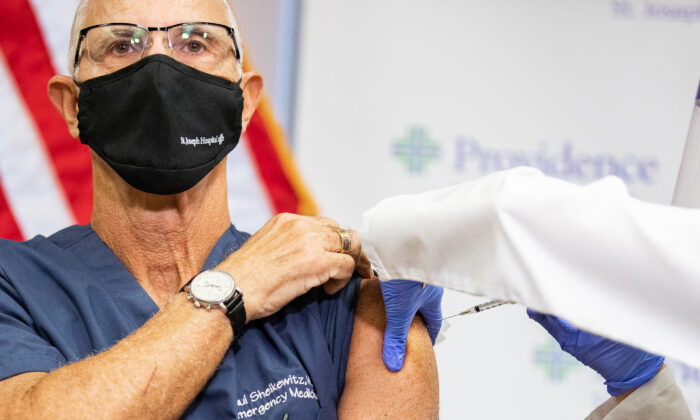 The federal judge who last week blocked New York officials from mandating COVID-19 vaccines for all health care workers in the state opted Monday to extend the order by up to another two weeks.

Even an attorney for the plaintiffs admitted the decision by U.S. District Judge David Hurd seemed “at least somewhat unusual.” However, it means some of New York’s most essential workers statewide will be covered by his order through Oct. 12.

On Aug. 16, then-Gov. Andrew Cuomo announced that health care workers, including those who work for private businesses, would need to receive their first dose of a vaccine by Sept. 27.

Unlike the vaccine orders given to nonmedical state workers, the state did not give physicians, nurses and other medical professionals an opt-out by testing. So, an unvaccinated health care worker would likely lose their job.

The state also refused to make any religious accommodations for workers who objected to drugmakers using aborted tissues to develop or test the vaccines.

In an interview with The Center Square Tuesday, Michael McHale, an attorney with the society, said the law clearly indicates that New York can’t enforce its ban on religious exemptions.

“It’s not an undue hardship (for the state) when these same workers have been able to treat patients throughout all of COVID for 18 months, taking all kinds of other precautions and those other precautions remain available,” McHale said.

When Hurd first granted the order, he set oral arguments for a preliminary injunction on Sept. 28.

Last Friday, New York Assistant Attorney General Ryan Hickey sent a letter to Hurd asking that arguments take place this Friday. The state sought the expedited hearing to have a decision in place before the mandate was supposed to take effect.

Plaintiffs’ lawyers objected to a Friday hearing because it would not give them adequate time to prepare.

Not only did Hurd again side with the plaintiffs, but he also went a couple steps further in his Monday order, even citing the pandemic.

“Upon review, and with due consideration for the time-sensitive nature of this dispute, the security considerations necessary to ensure the safety of courthouse visitors and staff, and the health concerns posed by the ongoing COVID-19 pandemic, the Court concludes that oral argument is not necessary to promptly resolve the pending motion,” Hurd wrote.

The judge still wants state officials to submit their response by Wednesday. However, since the punitive nature of the regulation would not even start until next Monday, Hurd noted he had good cause to extend it by two weeks.

At or by Oct. 12, he’ll determine whether to issue a preliminary injunction that would remain in effect while the case makes its way through the courts.

While McHale acknowledged that Hurd’s ruling seemed “somewhat unusual,” he added that it makes sense.

“It’s just such a clear legal case that it could be, I think, reasonably decided on the briefs, but I guess we’ll see,” he said. “Nothing’s guaranteed.”