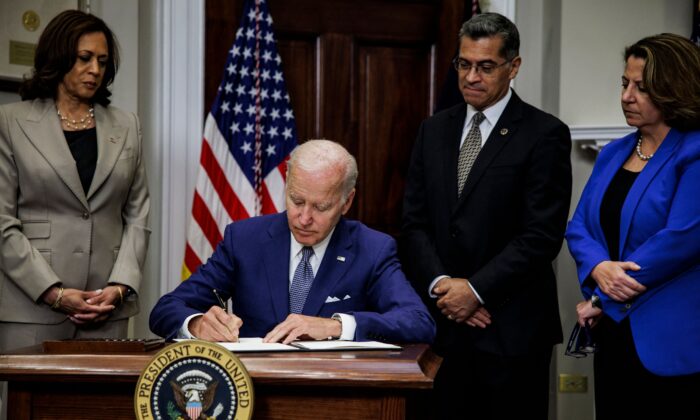 The federal government on Thursday extended its COVID-19 emergency for another 90 days despite President Joe Biden declaring the pandemic “over” weeks earlier.

U.S. Health and Human Services (HHS) Secretary Xavier Becerra confirmed the extension of the emergency in announcement posted on its website. No other details were provided.

He said that “a public health emergency exists and has existed since January 27, 2020, nationwide,” and it will continue to remain in effect.

The public health emergency, first declared in January 2020 and renewed every 90 days since, has dramatically changed how health services are delivered.

The declaration enabled for the emergency authorization of COVID-19 vaccines, testing, and treatments. It also expanded Medicaid coverage to millions of people, many of whom will risk losing that coverage once the emergency ends, and it temporarily opened up telehealth access for Medicare recipients, enabling doctors to collect the same rates for those visits and encouraging health networks to adopt telehealth technology.

Some Republicans have called on the White House to rescind the public emergency, while Biden and Democrats have asked Congress to pass more COVID-19-related spending bills.

However, COVID-19 has largely faded from the public eye as government-reported deaths and case numbers have plummeted in recent months.

During a September interview, Biden declared that the “pandemic is over,” which prompted White House officials to scramble to try and re-frame what the president had said.

Immediately after he made that comment, unnamed administration officials told the Washington Post that his remark would now make it harder to push COVID-19 vaccines and booster shots. It came on the heels of approvals signed off by the Food and Drug Administration and Centers for Disease Control and Prevention on updated booster vaccine doses made by Pfizer and Moderna.

White House adviser Anthony Fauci, claimed the president’s remark was “problematic” because, according to him people would interpret it as it’s completely over and we’re done for good, which is not the case … no doubt about that.”

The White House has said it would provide 60 days notice before it ends the public health emergency.

Along with suspending travel from China and other places, former President Donald Trump had declared a national COVID-19 emergency in early 2020 to free up some $50 billion in federal aid. That came weeks after reports of the virus emerged in mainland China as the first cases were being detected in the United States.