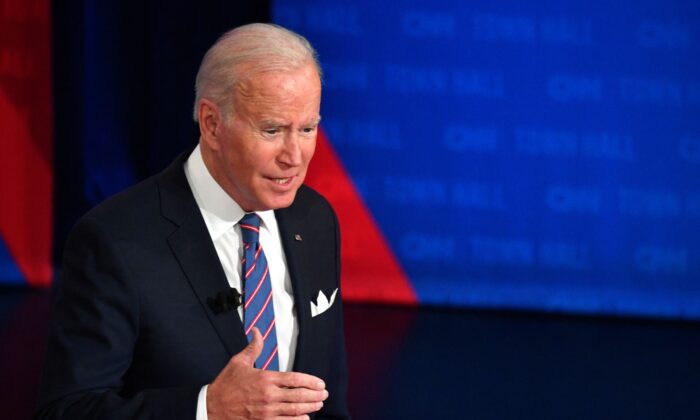 Federal contractors such as Boeing, Lockheed Martin, United Airlines, IBM, UPS, and many more employ a significant number of Americans. The new guidance, released on the Safer Federal Workforce website, provides flexibility for those companies to determine how to enforce the mandate.

“A covered contractor should determine the appropriate means of enforcement with respect to its employee at a covered contractor workplace who refuses to be vaccinated and has not been provided, or does not have a pending request for, an accommodation,” according to the guidelines.

On Sept. 9, Biden announced mandates for federal workers, federal contractors, and most health care staff—differing from the forthcoming mandate for businesses with 100 or more employees stipulating that workers either get the vaccine or submit to weekly testing. Federal contractors have no option to be tested, and the only way by which workers can opt out is by seeking a medical or religious exemption.

“Covered contractors are expected to comply with all requirements set forth in their contract,” the White House said. “Where covered contractors are working in good faith and encounter challenges with compliance with COVID-19 workplace safety protocols, the agency contracting officer should work with them to address these challenges.

“If a covered contractor is not taking steps to comply, significant actions, such as termination of the contract, should be taken.”

And a federal agency “may determine that a covered contractor employee who refuses to be vaccinated in accordance with a contractual requirement pursuant to [Biden’s executive order] will be denied entry to a Federal workplace, consistent with the agency’s workplace safety protocols,” it said.

For workers who don’t want to get the vaccine, “a limited period of counseling and education, followed by additional disciplinary measures” may be necessary, according to the White House. “Removal occurs only after continued noncompliance.”

Under the guidance, a covered contractor is responsible for considering requests from employees for religious exemptions from vaccination. If a
federal agency is considered a “joint employer” then the agency and contractor should review and consider what, if any, accommodation they
should offer.

The guidance says it is promulgated pursuant to federal law and supersedes any contrary state or local law or ordinance.

It came after the head of a trade association suggested that some companies might terminate their contracts with the federal government ahead of a Dec. 8 deadline.

Bill Sullivan, a vice president with the American Trucking Associations (ATA), suggested in an interview over the weekend that some firms likely won’t follow the mandate and will instead just drop their contracts with the government, saying that the potential loss of workers would be too great. Should those companies scrap their agreements, it will be harder for the federal government to move military vehicles, transport the National Guard, and transport food to troops around the United States.

“I am confident but with heavy heart recognize a vaccine mandate will mean less capacity for the government as a customer of freight,” Sullivan told Politico on Oct. 31.

“It has the potential to seriously impact military readiness,” he said of the COVID-19 vaccine mandate announced by Biden on Sept. 9.

The Biden administration, he said, is using a one-size-fits-all strategy to mandate vaccines for Americans and suggested that officials didn’t think of all the possible scenarios that could have emerged.

“I feel like the president has tried to be beautifully simple like this could apply to everybody, and by doing that, there will be an impact,” Sullivan told the outlet.

Previously, the American Trucking Associations, the Cargo Air Association, and other trade groups have issued letters making ominous predictions about fallout associated with the vaccine mandate. They warned that the already stretched-thin supply chain would be subject to further strain as some workers will be laid off or will simply quit over the mandate.

Other than mandating vaccinations for federal contractors and workers, the president also announced he would direct the Labor Department to create a rule mandating vaccines or regular testing for businesses with 100 or more workers, potentially affecting as many as 80 million private-sector employees.

White House officials have expressed confidence that workers—when faced with the mandate—would instead opt in. Last week, COVID-19 response coordinator Jeff Zients told reporters at a news conference that after United Airlines and Tyson Foods announced their respective vaccine mandates, it pushed both companies’ vaccination rates to more than 90 percent.

“These processes play out across weeks, not days,” Zients said about a week ago. “And so, to be clear, we’re creating flexibility within the system. We’re offering people multiple opportunities to get vaccinated. There is not a cliff here.”

But Commerce Secretary Gina Raimondo signaled the White House won’t delay its plans around vaccine mandates. In an interview on Oct. 31 with CBS News, Raimondo said that a delay “would be a big mistake” and again stressed that the only way the U.S. economy will recover is by having every worker get vaccinated.

Over the recent weekend, 10 attorneys general in Republican-led states filed a legal complaint against the Biden administration’s federal contractor mandate, arguing that the move is tantamount to a “power grab” and would imperil the U.S. economy.

White House and ATA officials didn’t respond to a request for comment by press time.