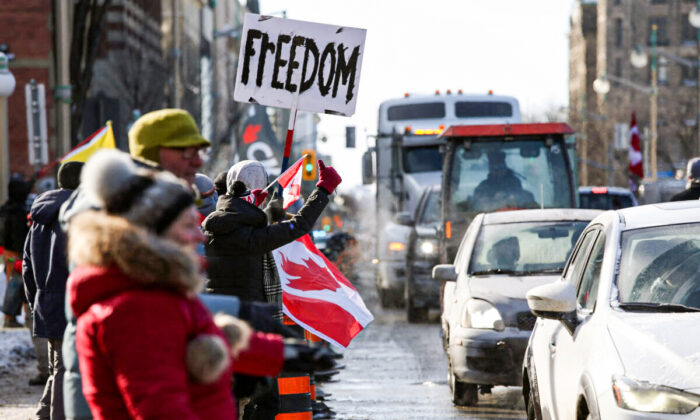 Supporters of the Freedom Convoy protest against COVID-19 vaccine mandates and restrictions gather in front of the Parliament Buildings in Ottawa on Jan. 28, 2022. (Dave Chan/AFP via Getty Images)
Canada

Recently disclosed internal emails reveal that a federal bank, Farm Credit Canada (FCC) in Regina, ordered its employees to track and report clients who were potentially sympathetic toward the truckers’ Freedom Convoy.

The emails, obtained by Blacklock’s Reporter through an Access to Information request, contradict FCC’s public denial in February that it was compiling lists of clients who supported “activity related to the Freedom Convoy.”

Sophie Perreault, the chief operating officer of the Crown corporation which provides financing to the agricultural sector, sent an email in late February 2022 instructing employees to compile the names of customers they suspected of supporting the convoy.

“If you become aware of a customer’s involvement report it immediately,” said Perreault in a staff email dated Feb. 23—just hours before the federal government ended its use of the Emergencies Act.

Perreault also said that FCC customers were not to be informed they were under scrutiny.

“If you become aware of potential customer involvement in blockades, occupations and other support of activity related to the ‘Freedom Convoy’ you must submit a tip to the customer diligence centre,” said her email.

“Include the customer’s name, stated involvement, date and any other pertinent details. Please do not complete any investigative work yourself or communicate any information about FCC’s approach to customers who voluntarily disclose their involvement.”

Customers discovered to be sympathetic towards the Freedom Convoy were to have their accounts frozen and possibly closed, Perreault said.

“Any individual and entities that have been verified by the authorities as participating in illegal activity under the Act will face appropriate action which will include not onboarding those found to violate the Act, freezing disbursements and assessing the need to terminate business relationships,” said her email.

“I have identified two FCC customers that occupied Ottawa,” reads one employee email. “Both had trucks parked (blockade) and there are several photographs online. If sources are required please let me know.”

Blacklock’s said that after it disclosed FCC’s Freedom Convoy supporter list on Feb. 24, the bank denied it, saying, “FCC has not compiled any list with respect to the Freedom Convoy,” and stipulated that “FCC employees must not speak to media.”

Another management email denied that FCC asked its employees “to hunt people down and start scouring the net to see if a customer was involved.”

Other emails show that some FCC employees questioned the corporation’s tracking and reporting of convoy supporters.

“Why are we investigating this?” wrote one manager in an email. “I expected we would get a list from the RCMP.”

Another manager asked “how the Emergencies Act might impact on how we proceed if a customer was asked to repay their loans and didn’t.”

Blacklock’s said it obtained the emails along with over 1,000 pages of “FCC censored documents” through its Access to Information request.