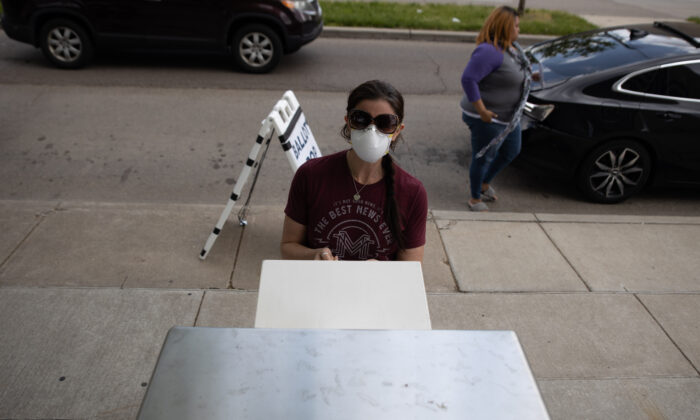 An Ohio voter drops off her ballot at the Board of Elections in Dayton on April 28, 2020. (MEGAN JELINGER/AFP via Getty Images)
Judiciary

The 5th Circuit Court of Appeals unanimously slapped down a federal judge’s ruling forcing Texas to allow all its residents to vote by mail on the theory that doing so would prevent the transmission of COVID-19.

Texas Attorney General Ken Paxton, a Republican, indicated he was satisfied with the decision.

“Allowing universal mail-in ballots, which are particularly vulnerable to fraud, would only lead to greater election fraud and disenfranchise lawful voters,” Paxton said in a statement to the media. “The unanimous Fifth Circuit ruling puts a stop to this blatant violation of Texas law.”

All 50 states provide for mail-in voting. In Texas, a voter is allowed to vote by mail if 65 or older, disabled or ill, in jail, or outside the county when voting is scheduled to take place.

Democrats had argued the disability provision could be interpreted broadly to include a lack of immunity to the virus. They lost.

The ruling, in Texas Democratic Party v. Abbott, an appeal from U.S. District Court for the Western District of Texas, came June 4.

In the ruling that was overturned, U.S. District Judge Fred Biery had found for Democrats, who argued it was unreasonable to expect voters to appear in person at polling stations and risk exposure to the CCP virus. Berry had granted a temporary injunction May 19 allowing all voters in the state to vote by mail in upcoming elections.

Biery, who was appointed by then-President Bill Clinton, determined that all Texas voters should be considered disabled and therefore deserving of special accommodations in voting because they lack immunity to the virus, and voting in person was hazardous to them.

The Texas Supreme Court also rejected that line of argument, holding that a lack of immunity didn’t constitute a disability. That court “interpreted ‘disability’ not to include lack of immunity to the Virus,” the 5th Circuit panel noted in its decision, adding that “it is a crime to encourage voters to indicate that they are disabled merely because they lack immunity.”

According to the panel, the country is “mired in a pandemic involving a virus that can cause serious illness and sometimes death,” and the Constitution entrusts the safety and health of the people “to the politically accountable officials of the States ‘to guard and protect,’” citing a 1905 Supreme Court precedent, Jacobson v. Massachusetts.

But the district judge here ignored state officials and “resolves to take matters into his own hands.”

The panel noted and rejected the judge’s criticism of Texas officials. The judge, according to the panel, wrote, “‘There are some among us who would, if they could, nullify’ the promises of the Declaration of Independence and ‘forfeit … the vision of America as a shining city upon a hill.’

“In an order that will be remembered more for audacity than legal reasoning, the district judge intervenes just weeks before an election, entering a sweeping preliminary injunction that requires state officials … to distribute mail-in ballots to any eligible voter who wants one.”

The judge erred, the panel reasoned, because the presence of the CCP virus didn’t give federal judges “a roving commission to rewrite state election codes.”

Oregon, Washington, Colorado, Utah, and Hawaii carry out their elections wholly by mail.

Republicans are suing California Gov. Gavin Newsom, a Democrat, in federal court over his executive order requiring that all registered voters be sent vote-by-mail ballots for the general election on Nov. 3, ostensibly to reduce the likelihood of transmission of the virus among voters.

Democrats are now suing in at least 13 states to overturn restrictions on mail-in voting—and attorney Marc Elias of the high-powered Democratic law firm Perkins Coie, vows that more are coming, as The Epoch Times has previously reported.