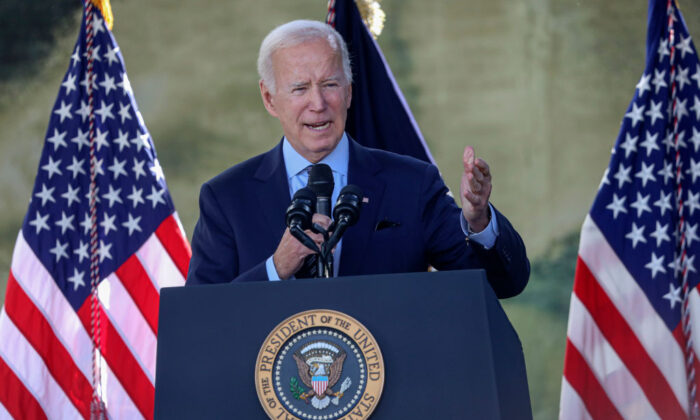 House Republicans produced a 1,000-page report on Nov. 4 that details how the Department of Justice (DOJ) and the FBI have shifted their focus toward targeting conservative Americans who protest at abortion clinics and parents who protest at school board meetings.

But the politicization of federal law enforcement is just the tip of the iceberg.

Since Joe Biden assumed the presidency nearly two years ago, his administration has been relentless in redirecting virtually every federal agency toward activism for “climate and social justice” and aligning the federal government in lockstep with the corporate environmental, social, and governance (ESG) movement.

Among his first actions, in January 2021, Biden issued his “Executive Order on Advancing Racial Equity,” which set out “an ambitious whole-of-government equity agenda.” He appointed Susan Rice to lead his Domestic Policy Council and to “coordinate efforts to embed equity principles, policies, and approaches across the Federal Government.” This effort diverted federal agencies from their designated function and, in some cases, even pushed them to take action outside their legal authority.

Under this new regime, even the most technocratic U.S. agencies, such as the Federal Reserve, have taken up the ESG cause. Tasked with the responsibility of fighting inflation and keeping unemployment low, the Fed is also one of America’s key bank regulators, with a mandate to ensure that our financial system is secure and robust. However, in the midst of record inflation and a deepening recession, the Fed under the Biden administration has taken on environmental and racial causes.

In November 2021, for example, the Fed declared its support for the Glasgow Network of Central Banks and Supervisors for Greening the Financial System (NGFS), stating that “the Federal Reserve is committed to working within our existing mandates and authorities to address the implications of climate change, particularly the regulation and supervision of financial institutions.” In support of racial ideology, the Federal Reserve Bank of San Francisco declared that “racial equity is central to the SF Fed’s mission.”

That prompted Sen. Pat Toomey (R-Pa.), the ranking Republican on the Senate Banking Committee, to notify Fed officials that their focus on “politically charged social causes” was “wholly unrelated to the Federal Reserve’s statutory mandate.” Critics of the Fed’s effort to promote racial equity charge that this led the Fed to keep money too cheap for too long, leading to rampant inflation that has ultimately hurt the poor the most.

Following the government mantra that “personnel is policy,” Biden nominated activist senior officials to the Fed, such as Sarah Bloom Raskin, who criticized the Fed for not following European governments in their pursuit of environmental goals. Raskin said that America’s bank regulators “stand in stark contrast to the financial regulators in other rich countries, where policies and processes are being reimagined to accelerate a rapid, orderly, and just transition to a renewable, biodiverse, and sustainable economy.”

Raskin was ultimately rejected when Sen. Joe Manchin (D-W. Va.) withdrew his support; but another Biden nominee with similar views, Lael Brainard, was subsequently approved as vice chair in May and promoted to the Fed’s No. 2 post.

Similarly, the U.S. Department of the Treasury, whose designated role is to “maintain a strong economy,” has established a Racial Equity committee, and its new vice chair, Felicia Wong, vowed to make “racial equity central to the Treasury Department’s mission.”

Under Biden’s watch, the DOJ announced in May that it was launching a “comprehensive environmental justice strategy,” adding the obligatory racial justification that “communities of color, indigenous communities, and low-income communities often bear the brunt of the harm caused by environmental crime.”

It’s unclear how “environmental justice” differs from what had heretofore simply been justice; namely, equal treatment under the law. But the DOJ’s recent reestablishment of Obama-era “settlement slush funds” may give a clue about at least some of what this entails.

Settlement slush funds became common during the Obama administration and featured the DOJ cutting deals with corporations such as Volkswagen, which was fined for fraudulent emissions testing. In return for the department agreeing to reduce the fines, Volkswagen agreed to invest $2 billion in zero-emissions technology. In this way, money that should have gone to the U.S. Treasury was diverted to causes that the Obama administration favored.

Wall Street banks that were assessed fines related to the mortgage crisis also participated, donating to organizations such as the National Fish and Wildlife Foundation and the National Community Reinvestment Coalition, and getting charitable tax deductions in return for reduced settlement payments. The Obama administration was thus able to channel money to pet causes and circumvent Congress, which has sole budget authority under the U.S. Constitution and had refused to allocate federal funds according to Obama’s wishes.

Settlement slush funds were banned in 2017 under the Trump administration by then-Attorney General Jeff Sessions, who stated that any corporate fines must either be paid directly to victims or go to the U.S. Treasury, and not be diverted to fund the pet causes of federal agencies. However, they were revived under the Biden administration by a January 2021 executive order titled “Protecting Public Health and the Environment and Restoring Science to Tackle the Climate Crisis,” in which Biden revoked all Trump administration directives related to climate change or environmental causes.

Under the DOJ’s new “environmental justice” strategy, gathering evidence of environmental crimes will be facilitated by a new directive from the Securities and Exchange Commission (SEC) that requires listed companies to publish audited reports of all CO2 emissions and climate-related risks, as well as their plans to address them.

Although the SEC was established to protect small investors from securities fraud, its new “green accounting” rule requires that all listed companies report not only their own carbon emissions but also those of their vendors, even if those vendors are small businesses that are not listed.

“Here’s what’s particularly horrifying about that,” Will Hild, executive director of Consumers’ Research, told The Epoch Times. “Those companies themselves may not be publicly traded. … And yet through this rule, they’re going to force people to force their vendors to adhere to this.”

An additional aspect of this SEC rule applies to the end users of corporate products; in other words, “carbon emissions disclosures around the consumers’ use of the product,” Hild said.

“[That] means there’s going to be a huge incentive to start tracking the behaviors of consumers by putting literal trackers on the products.”

There’s also the concern that this SEC ruling will give an advantage to large corporations over small businesses that may not be able to afford the cost of compliance. According to a report by The American Farm Bureau, small farmers, though they have nothing to do with Wall Street stock exchanges, are one segment of our economy that could be threatened by this rule.

According to Farm Bureau President Zippy Duvall, “Farmers have never [before] been subjected to regulations intended for Wall Street.”

“Unlike large corporations currently regulated by the SEC, farmers don’t have a team of compliance officers or attorneys dedicated to handling SEC compliance issues,” Duvall said. “This proposal could keep small farmers from doing business with public companies at a time when all farms are needed to ensure food security here and abroad.”

In October 2021, the Department of Labor under the Biden administration instituted a new rule that allows private pension funds to invest on ideological grounds, again revoking a Trump administration rule, which limited pension investing exclusively to maximizing investor returns. Similarly, the Office of the Comptroller of the Currency, a bank regulator, overturned a Trump administration rule that prohibited banks from engaging in blanket discrimination against politically disfavored industries.

This gave a green light to banks to shun the firearms industry, coal plants, oil drilling in Alaska, and others that are disfavored by ESG ideology. Other activist agencies under Biden include the Department of the Interior, which in September revoked drilling permits on 113 oil and gas leases in Montana, North Dakota, and South Dakota in response to environmental protests.

According to a report by The Heritage Foundation, “To date, Biden is the only president in modern history not to have held a single oil and gas lease sale on federal lands, despite clear direction from Congress to do so quarterly. While the Department of the Interior is being forced by court order to hold a lease sale this quarter, it increased fees by 50 percent and decreased the amount of available acreage for drilling by 80 percent—even as it cuts fees and red tape for renewable ‘green’ energy production.”

In some cases, the Biden administration’s violations of the U.S. Constitution have been so flagrant that federal courts have stepped in to block them. An attempt by the Environmental Protection Agency (EPA) to force electric utilities to switch from fossil fuels to wind and solar, for example, was struck down by the U.S. Supreme Court in the landmark West Virginia vs EPA decision. In a 6–3 ruling, the court stated that only Congress has the power to legislate industrial energy policy; it ruled that an unelected executive agency such as the EPA lacked the constitutional authority to effectively create laws on “major questions” of this magnitude.

This decision set a precedent that will likely be applied to other areas of administrative overreach going forward. Similarly, numerous other Biden administration intrusions into the private sector were also slapped down by court rulings; for example, that federal agencies did not have the right to force companies to fire employees who refused the COVID-19 vaccine, or to ban landlords from evicting tenants who don’t pay rent, or to force mask wearing on public transportation.