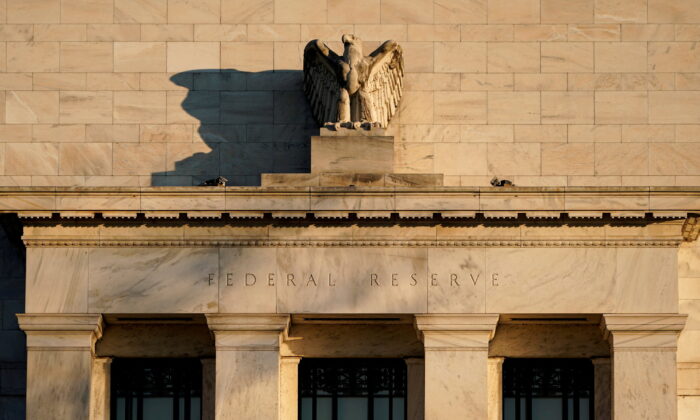 The Federal Reserve building is seen in Washington, on Jan. 26, 2022. (Joshua Roberts/Reuters)
Markets

The Federal Reserve is expected to deliver two back-to-back half-point interest rate hikes in May and June to tackle runaway inflation, according to economists polled by Reuters who also say the probability of a recession next year is 40 percent.

With the unemployment rate near a record low, inflation the highest in four decades, and a surge in global commodity prices set to persist, most analysts say the Fed needs to move quickly to keep price pressures under control.

The latest April 4–8 Reuters poll of more than 100 economists forecast two half-point rate rises this year, the first such move since 1994, taking the federal funds rate to 1.25 percent – 1.50 percent by the June meeting.

That brings the end-year prediction from the March Reuters poll at least three months forward, and more in line with interest rate futures pricing.

A strong majority, or 85 of 102 economists, forecast 50 basis points in May, and a still-solid majority of 56 said the Fed would follow up with 50 basis points as well in June.

“Given the shift in official commentary and with inflation pressures visible throughout the economy, we believe the Fed will deliver half-point interest rate increases at the May, June, and July policy meetings,” said James Knightley, chief international economist at ING.

While the central bank, chaired by Jerome Powell, is likely to gear down to quarter-point moves in the second half of this year, the federal funds rate is now expected to end 2022 at 2.00 percent – 2.25 percent, 50 basis points higher than the median forecast in a poll taken last month.

Moving so quickly with interest rates, especially in an economy that has become used to very low borrowing costs for many years, comes with risks.

“With the Fed seemingly feeling the need to ‘catch up’ to regain control of inflation and inflation expectations, a rapid-fire pace of aggressive interest-rate increases heightens the chances of a policy misstep that could be enough to topple the economy into a recession,” added Knightley.

Indeed, respondents to an additional question gave a median one-in-four chance of a U.S. recession in the coming year, rising to 40 percent over the next 24 months. The bond market is already showing signs of recession concerns.

That partly explains a rapid slowing in the pace of rate hikes next year to only a cumulative 50 basis points, according to the Reuters poll, bringing the fed funds rate to 2.50 percent – 2.75 percent by the end of 2023.

A few economists are already predicting lower rates as soon as the fourth quarter of next year.

Yet despite expectations for an aggressive policy tightening path, inflation was not seen dropping to the Fed’s 2 percent target at least until 2024.

The Russia-Ukraine war, which has sent commodity and energy prices soaring, is also making it harder to predict when inflation will eventually come down.

Inflation as measured by the Consumer Price Index (CPI) was predicted to have peaked at 7.9 percent last quarter, and average 6.8 percent this year, a significant upgrade from 6.1 percent in last month’s poll.

The U.S. labor market was expected to further tighten after unemployment dropped to 3.6 percent last month, only slightly above pre-pandemic levels and what it is forecast to average in 2022.

The jobless rate was predicted to average 3.5 percent next year and stay there in 2024, roughly in line with the Fed’s own optimistic view and not consistent with respondents’ concerns about recession.

Growth forecasts were downgraded across the board. The economy was expected to grow 3.3 percent and 2.2 percent this year and next respectively, down from 3.6 percent and 2.4 percent predicted last month.

By Prerana Bhat and Indradip Ghosh