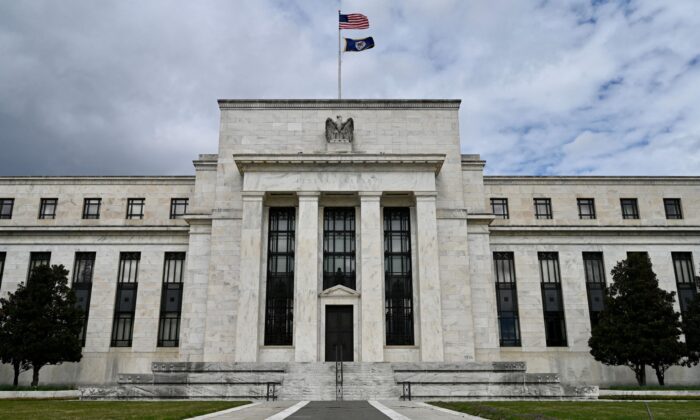 Fed Paying Banks to Not Lend Has Cost $1.5 Billion in 4 Weeks

The Federal Reserve paying interest on bank reserves and selling treasuries to banks overnight, which in practice means paying banks so that they lend less, is becoming more expensive with the Fed’s recently initiated series of interest rate hikes. Over the past four weeks, the central bank has dished out nearly $1.5 billion to financial institutions that keep their cash stockpiles with the Fed and buy its bonds overnight. That number could multiply in the coming months.

With the gargantuan federal spending that took place during the COVID-19 pandemic, banks have amassed an unprecedented hoard of cash reserves—money deposited by their customers. Normally, such reserves would be a dead weight on the banks’ balance sheets, not put to any productive use. Banks would thus try to lend against it and invest it, making it circulate in the economy.

In 2008, however, Congress authorized the Fed to start paying interest on the reserves, making it worthwhile for the banks to leave the cash idle. The interest was initially tiny, settling on 0.25 percent annually, but every time the Fed raises rates, this rate goes up as well. By 2019, the Fed was paying the banks $1.5 billion every two weeks.

With the onset of the pandemic in 2020, the Fed dropped the rates to nearly zero, encouraging banks to invest and lend more. The interest on reserves dropped to about $110 million every two weeks. Yet as the government kept piling up trillions of dollars in debt, the Fed kept printing more dollars and the reserves grew dramatically, from less than $1.7 trillion in early 2020 to more than $4.2 trillion in September 2021. Even at the minuscule interest rate of 0.15 percent, the Fed was already paying almost $250 million every two weeks.

The reserves started to taper then, but largely because of another Fed trick called “Overnight Reverse Repurchase Agreement,” or “reverse repo.” It means that the Fed sells the federal obligations it owns to banks one day, only to buy them back at a slightly higher price the next day. The price difference only added up to a 0.05 percent annualized interest rate, but the banks still jumped at the opportunity, as it allowed them to make an immediate profit with essentially no risk and very little work. By the end of September 2021, the Fed was paying about $2 million per day in reverse repo interest.

As the inflation kept going up, in March, the Fed finally started to raise the rates in a bid to tighten the credit spigots. The rates target elevated from a zero- to 0.25-percent range to a 0.25- to 0.5-percent range. The move appears tiny, but the effect on the interest payments was dramatic. The interest rate on reserves more than doubled to 0.4 percent from 0.15 percent. The reverse repo rate jumped to 0.3 percent, multiplying by six.

In the four weeks since the rate hike, the Fed dished out nearly $1.2 billion in reserve interest and more than $300 million in reverse repo interest.

The Fed has foreshadowed plans to let the rates go up to about 2 percent by the end of the year. Depending on how high the banks’ reserves are by then, the Fed could end up paying $5 billion or perhaps $8 billion per month to the banks.

“The cost of paying interest on excess reserves is not really relevant to Fed officials because in a worst-case scenario they just send the bill to the U.S. Treasury,” Mark Thornton, an economist with the classical liberal Mises Institute, said via email. “I think they are walking themselves into a corner, but they have been adept at wiggling out of such problems without much damage to themselves in the recent past.”

Thus far, the Fed has no issue paying the interest. Because of its massive portfolio, which includes $2.7 trillion in mortgage-backed securities, it collected more than $100 billion in interest last year, according to Robert Murphy, a senior fellow with the Mises Institute and expert on monetary policy.

“Of course, the money isn’t free,” Murphy told The Epoch Times via email. “You could say that, in a sense, U.S. taxpayers would be footing the bill for the extra interest paid to the banks by the Fed.”